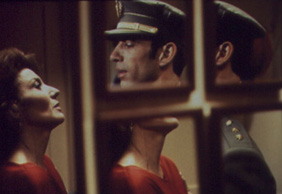 Pedro Almodóvar’s eleventh feature, The Flower of My Secret, accomplishes a minor feat: it manages to be both a departure from the style and tone that marked the director’s previous films and a reinstatement of his dearly held themes. Diverging from the colourful, campy romps that won Almodóvar international acclaim, The Flower of My Secret is more subdued and serious, and although not as commercially successful as the films to follow, it marks the beginning of what many critics feel is the director’s more mature output (his subsequent films include: Live Flesh [1997], All About My Mother [1999], Talk to Her [2002], and Bad Education [2004]).

The film provides one of Almodóvar’s most sustained and self-conscious meditations on the process of authoring and the role of the author. Marisa Paredes is Leo, a successful writer of romance novels on the verge of a nervous breakdown. Leo’s pen-name is Amanda Gris. Yet her pseudonym-self and her contract with her publisher are under the threat of being extinguished by Leo’s dark cloud; we find her in the midst of a failing marriage. Leo confesses to her disgruntled editor that she can no longer write “pink” (romance) novels: “I try to write pink, but it all comes out black”. Paco (Imanol Arias), Leo’s estranged husband, is a military man serving in Bosnia. With characteristic irony, Almodóvar reveals that Paco, the great war strategist, cowardly fails to fight the raging one at home; he goes out to save the world, abandoning Leo in the process. Yet, Paco’s presence suggests something else, particularly as it is unusual for geopolitical conflict, especially in the guise of a military man, to make its way so explicitly into an Almodóvar narrative. It is thus hard to resist conjecturing that Leo’s dark mood may be a fictional inscription of Almodóvar’s dark view of the surrounding world in 1995 (and from which the rest of his oeuvre hasn’t quite recovered).

Love and war, and love as war are favoured subjects for melodrama. In The Flower of My Secret, war remains a backdrop, present through the tangential character of Paco. But it also makes its way into the film through reference to Casablanca (Michael Curtiz, 1942). The citation of Casablanca comes courtesy of Angel (Juan Echanove), a true saviour to Leo and an overweight warrior-of-the-heart sans official uniform. Angel tells Leo how he felt the day she fell into his arms by quoting a line from Humphrey Bogart: “I’ll never forget that day – the day the Germans occupied Paris. The Germans wore gray and you wore blue.” Such recourse to artifice as a representation of reality – fake words used to express real feelings and to occasion true emotion – is an ongoing theme in Almodóvar’s work. Taking a page from Douglas Sirk, and pushing it a little further, Almodóvar’s films overflow with the knowledge that life is to be found in its imitation. One needs to look no further than to the melodramatic metaphor of organ transplants that opens both this film and All About My Mother. As with the device of citation, a mode he often turns to in his work, Almodóvar suggests that appropriation becomes organic so long as life can be breathed into it. The question of the point or source of origin is secondary if not irrelevant.

Almodóvar has always made the point that the purely illusory medium of film is, after all, his only recourse to representing the world and its emotive register; that which we may otherwise call reality. Yet, few of Almodóvar’s films provide as heart-warming an image of intimacy, despite the artifice, as this one: Angel saves Leo from her spiralling depression, while Leo, unbeknown to her, saves Angel by giving him an outlet for his “pink novelist” self. Angel becomes Leo’s ghost-writer and the new Amanda Gris, freeing her from the shackles of her contract. In a sly gesture of self-inscription, Almodóvar casts one of his staple actresses, Chus Lampreave as Leo’s mother (and Rossy de Palma from Women on the Verge of a Nervous Breakdown [1988] as her sister). One might recall that Lampreave and Paredes were already seen together in Dark Habits (1983) as Sister Rat and Sister Manure. Lampreave’s Sister Rat smuggles sensationalist novels from the convent, which she publishes under the pseudonym Concha Torres, making her in fact the progenitor of Paredes’ Amanda Gris. Yet the theme of literary transvestism can also be evidenced in other films like Law of Desire (1987), High Heels (1991), Kika (1993) and the more recent Bad Education. Having once published the parodic memoirs of an international porn star under the pseudonym Patti Diphusa, Almodóvar himself is no stranger to this process.

This motif of the ghost-writer provides the pivotal entry point for Almodóvar’s ongoing investigation into the doubling of identity. Generally, this play on identity in the director’s work is analysed by way of the gender-transvestism that permeates his films. Yet the theme of transvestism in his films cuts even deeper. Often, his films also explore the appropriation of identity through voice, and this film, which is devoid of the sexual outlaws we had become accustomed to, is a clear example. Almodóvar seems to suggest that the only way to the self is through its performances of itself and for this reason the self-reflexivity contained in this film is inevitable: Almodóvar-as-director acknowledges himself as a ghost-writer of sorts. Like Leo, Almodóvar is also an author, albeit a cinematic one. Like Angel, Almodóvar appropriates the “voices” of women to tell his stories – not unlike George Cukor, whom Almodóvar cites via the reference to Rich and Famous (1981) at the film’s end. Almodóvar, like Cukor before him, is touted by the media and critics as a “woman’s” director (but to be fair, Live Flesh, Talk to Her, and Bad Education prove he is just as adroit at directing men – this is, after all, a director who has made a mockery of any too simplistic idea of gender). Furthermore, it is also characteristic of Almodóvar to take his references and quotations beyond their original cattiness, making the transaction between Leo and Angel, in this case, a consistently loving one rather than mimicking the one sometimes tainted by jealousy and competition that occurs between the two lead characters played by Jacqueline Bisset and Candice Bergen in Rich and Famous. This is something he will also do with the inscription of All About Eve (Joseph L. Mankiewicz, 1950) in All About My Mother, where the women of the latter film help rather than undermine each other; or with the figure of Benigno in Talk to Her who is a kinder version of Hitchcock’s Norman Bates. Like organs being transplanted, these references also become something else when they are restaged. To continue with the metaphor, one might say that they breathe a different air within the body of an Almodóvar film.

Like Leo’s sudden shift from the pink romance to the black thriller, The Flower of My Secret is Almodóvar’s announcement of his own shift in stylistic mood (even if this film is not a thriller). Made at the height of his international popularity, this satirical condemnation of the machinery of publicity becomes a thinly veiled cry for authorial freedom. The Flower of My Secret at some level functions as a warning to all those who would pigeon-hole him; this film, not unlike Leo’s last novel, proves to be Almodóvar’s courageous move away from all that had made him marketable.