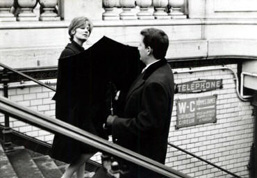 Though rarely noticed, it is mostly in Buster Keaton’s films that we can see a spatial universe in which gestures and movements take on new meaning…. The impossibility of describing the humor of [Keaton] to someone who has not seen the film guarantees the authenticity of its cinematic value.

Eric Rohmer’s comedic short film Place de l’Etoile – one of six films which comprise the 1965 portmanteau work Paris vu par… – beautifully recalls the director’s own description of Buster Keaton’s work. For anyone who has ever been awestruck by the portrayal in Rohmer’s cinema of life’s most amusing and revealing but nearly invisible details, the quote above should resonate. The critic-turned-director’s exquisite career project, now over 50 years in the making, has been to explore the gap between what is said and what is shown, between our verbal expression and our everyday sensual experience, between literature’s window onto interior psychology and film’s exterior sculptural and plastic surfaces. Place de l’Etoile affords us an amusing glimpse into Rohmer’s development of this aesthetic approach during the 1960s.

The film opens with two shots of the Arc de Triomphe, a great stone monument dedicated to Napoleon’s victories. The monument is found at the film’s titular location, a busy intersection of twelve avenues that working-class Parisians must negotiate every day. While tourists snap pictures, citizens go about their day as usual. Rohmer’s own voiceover lets us know that these roads are designed not for the hapless pedestrians who must cross them but for the constant rush of metropolitan traffic; this commentary invites us to notice the construction work surrounding the area, a condition which makes traversing the intersection even more difficult. By design, though, the quotidian detail in the images exceeds the information provided to us by the voiceover narration; as James Monaco has suggested, “the details of everyday life, materials for all of Rohmer’s films, are really the abstract subject of [Place de l’Etoile]” (2). Rohmer’s camera lingers on the beautiful human ephemera of individual faces and groups standing on street corners (an affect greatly – and ironically – intensified when one watches an older print of the film) as well as signs and buildings, pinpointing through celluloid the material reality of a person, a place, or an object before abruptly – via sudden cuts which seem to have no particular motivation in the narrative – guiding us to another area of the location. Such editing strategies inflect our sense of Rohmer – who is to many the cinema’s quintessential self-effacing realist – as a multi-dimensional formalist, for his brisk montage in Place de l’Etoile does not analyse space across shots so much as it asks us to reorient ourselves to each new and immediate presentation of the city that we see in every frame, a constant process involving both a freedom in visually exploring the represented world for ourselves (within the space of the image) and being carried along by the director (through a series of generously open looks and glances across time).

This effect – establishing the exterior reality of a geographical location in a single frame and then evoking, in a cut, what inevitably escapes all human attempts at precision – increases our sense of the main character’s attempts at maneuvering through his environment. Jean-Marc (Jean-Michel Rouzière), who heads to work through these intersections, walks with an air of assured infallibility which surely guarantees his eventual gaffes, recalling the unjustified confidence – and corresponding pratfalls – of the great silent comedians, while specifically evoking Chaplin in the umbrella which Rouzière often holds like the Little Tramp’s cane. As he strides through the city, Jean-Marc carefully avoids the most minute rubble from construction sites in order to clear a path on which his shoes will not be damaged, knocking aside urban debris in a manner which displays his own carefully honed bourgeois refinement. But Jean-Marc cannot quite control everything. In a subsequent scene when his shoe is punctured by a woman’s high heel while riding on a bus, Rohmer humorously sketches the ultimately intangible manifestations of social tension between individuals, which in his films are often, as in this scene, figured between men and women.

Later, we see Jean-Marc get into a scrap with a belligerent drunk, but when Jean-Marc jabs him with the umbrella, he believes he has killed him, and for the rest of the film he avoids Place de l’Etoile on his usual route to work in an early depiction of Catholic guilt in Rohmer’s oeuvre. Our sense of Rohmer as a formalist increases; according to French New Wave scholar Richard Neupert, the film creatively suggests, through what otherwise appears to be an apparently austere representation of reality, Jean-Marc’s state of mind:

Once he gets to work and buys himself a new umbrella, having left his old one at the scene of the crime, a siren can be heard, but whether these are all objective, diegetic sounds or reflections of Jean-Marc’s mental, subjective fear remains unclear, further displaying [Rohmer’s] mix of real and fantasy worlds. (3)

This brief description of Place de l’Etoile only hints at the richness and generous depth of comic and human ambiguity in both this film and Rohmer’s oeuvre in general. Neupert has called the film both “one of Rohmer’s most personal movies ever” and Paris vu par…‘s most interesting segment, writing that “Rohmer and cinematographer Néstor Almendros [create] a fast-paced, lively film that owes much to the brisk editing of the location footage”, thus successfully fulfilling producer Barbet Schroeder’s desire to pay tribute to Italian neo-realism in this omnibus work (4). Place de l’Etoile was produced during a moment of transition for Rohmer, for it arrived two years before the breakthrough success of La collectionneuse (1967) and the subsequent Moral Tales (contes moreaux); at the time of its making he was involved primarily in producing educational documentaries for television. Like Jacques Rivette, Rohmer was one of the French New Wave’s late starters. But also like Rivette, he was an important, if temporarily marginalised, contributor to the history of French cinema during the early and mid-1960s, which the formal play and gentle comic spirit of Place de l’Etoile masterfully confirms.