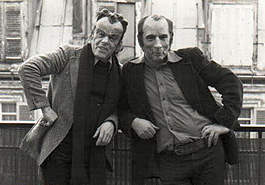 The French are able to switch. I made a film in the ’70s called Solzhenitsyn’s Children – which was actually on PBS, by the way – and it was about the French Left, about all the intellectuals who had been rampant Marxists. Then, they read Solzhenitsyn and they all did a 180-degree switch. Not just privately, but very publicly. People like Bernard-Henri Levy, Andre Glucksmann, all staged a public mea culpa. Why? I guess France is like that, more volatile, and also they profited mightily from their change by writing instant best-sellers on their new position and becoming the darlings of the press, probably getting more attention than they had ever had as Marxists.

Paris in May 1968 was in chaos. Striking students joined with unionists to take on the police, the Riot Squads (CRS) and anyone else who got in their way in this defining moment in the politics of the post-war era. It was a time to be young and the events (still referred to as “les événements”) of that season are inscribed in the French (and world) political consciousness.

“The movement of May is irreversible”, declared Jacques Doniol-Valcroze in the August 1968 Cahiers du Cinéma, because cinema, too, was part of this European equivalent of the imminent Chinese cultural revolution. Looking back now, the declarations, the street combats, all the dramatic confrontations and posturing of the year’s events seem much more self-indulgent than heroic. But there was also a great deal at stake – effectively a generational change, not only in France but in Europe more generally that would lead to the disappearance of Charles de Gaulle from the political heights and also to the formation of the Red Brigades and other violent Leftist groups of the ’70s. May 1968 was literally a turning-point in the contemporary politics of the western world. Little survives of the overheated passions of those times, except piles of pamphlets and polemics and kilometres of dramatic black-and-white news footage of burning street barricades and Citroën cars, charging police and masked students.

But a decade later, in 1978, Australian filmmaker Michael Rubbo decided to pay a visit to Paris on the tenth anniversary of les événements to see what had happened to the actors, mostly young men and women, of this great theatre of the streets. He was also setting out to tackle that most daunting and doomed of tasks, to analyse on film the crisis in the European political Left after the publication of Solzhenitsyn’s Gulag Archipelago and the collapse of faith in the Soviet dream after the invasion of Prague in 1968.

Rubbo had honed his personal style as a documentary filmmaker since joining the National Film Board of Canada in the late 1960s. His much-awarded Sad Song of the Yellow Skin (1970) also introduced the filmmaker himself as subject, wandering the streets of Saigon during the height of the Vietnam War, puzzled, saddened, always wryly interrogating received opinion. This style has persisted right through to his latest work, Much Ado about Something (Michael Rubbo, 2002), a personal odyssey through the quicksands of the endless Shakespeare-Marlowe controversies, and Rubbo’s persona, as a knowing Candide-like figure, is a striking detour in documentary history.

In Solzhenitsyn’s Children (1979), Rubbo enlisted the aid of Canadian journalist and litterateur Louis-Bernard Robitaille, and like a comedy team they fearlessly tackle the muddied intellectual waters of the French Left and Right, as well as everything in between, ten years after the streets burned and everything, it seemed, was up for grabs! The two set out by Robitaille’s little moto, by hire car (that Gallic all-purpose charabanc, an iconic 1970s Renault 16, of course) and on foot to track down the key players of 1968 and find out where they stand today. Using a tag team of interviewers on camera in this way produces an undertone of comedy. It also revives the old notion of the flaneur, the amateur but always interested stroller of the streets of Paris, celebrated by Baudelaire and, a century later, by Walter Benjamin.

The mainly hand-held cinematography, especially that of Andreas Poulsson, gives energy and pace to the headlong rush through a city gearing up for the national elections and much is at stake again – for perhaps this time the socialist François Mitterand may just win. It’s Left versus Right all over again – business as usual in the street theatre of Parisian politics – for this is very much a movie about living in Paris itself, that true centre of the “hexagon” of greater France, and guiding star for all the myths about the City of Light.

“And so away he goes, hurrying, searching. But searching for what? He is looking for that quality which you must allow me to call Modernity.” (Baudelaire, 1964) This description of the flaneur rushing around the modern city (in this case Paris) seems to fit Rubbo and Robitaille perfectly as they zoom about the city and indeed one interviewee (Henri Anselme) calls Robitaille, rather scornfully, a “yellow gloved … dandy”. The film captures perfectly the spirit of an intellectual life lived largely on the streets of Paris – but also the sense of an ever-present History.

Rubbo uses a great deal of intercut historical footage from the Stalinist show trials of dissidents in the early 1950s to the 1968 Prague Spring as it was crushed by Soviet tanks, and thus gives the film a timeless quality. There is also a charming sense of bewilderment as Rubbo and Robitaille find contradiction and absurdity at every turn. It seems the more intellectual stars they interview, the more confusing the whole thing becomes, and, in the end, that is the dominant note that Rubbo (who also cut and narrates the film) finally decided upon. And the list of interviewees is extraordinary – a testament less to Robitaille’s Paris connections than the power of a film crew to get in anywhere! The resulting interview grabs with anyone from the editor of the socialist daily l’Humanité to superstar novelists like Philippe Sollers are generally funny and baffling in equal measure – as the two often admit, trudging wearily and puzzled away from the latest mix-up!

Rubbo is artful enough (in his semi-retirement he also paints) to use as backdrop just about every charming and famous site you can name from Nôtre Dame to the Rue de Rivoli and Les Halles. The camerawork also captures more postmodern structures like the Centre Georges Pompidou (know locally as the Pompidouleum) which like the Communist Party headquarters sits strangely yet somehow well amidst Baron Haussmann’s elegant, flowing new Paris.

Solzhenitsyn’s Children is a documentary of great charm and style that also perfectly captures a unique time in European history.

Walter Benjamin, One Way Street and Other Writings (London: Shorter, 1979)