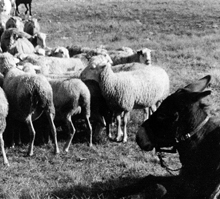 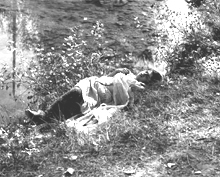 Au Hasard, Balthazar (1966) and Mouchette (1967) are the only films Robert Bresson made in successive years, and arguably show him at the zenith of his powers. They are his last black and white works, and his first works where the “transcendental” effect at the tail of the films is muted or ambiguous. In their luminosity and harshness, their thematic form and their narrative setting, they very much go together; but there are crucial differences between them.

Balthazar is a parable of sin and suffering, but barely a religious one. The Biblical echoes in it in fact seem referential (not reverential), more of a cue been taken from Dostoyevsky’s Crime and Punishment. In that novel (which Bresson obviously plundered for Pickpocket and L’Argent), there is a harrowing scene where a workhorse is beaten and beaten till it crumples to the ground. It is hard not to be moved by the scene, and the same applies to Bresson’s film. Like Dostoyevsky, Bresson is acutely realist, and only unconventionally spiritualist.

This Bresson creation, the donkey Balthazar, is one of the most intriguing and powerful in all cinema. Balthazar, whilst not the protagonist, is certainly the film’s central character, and Bresson refuses to anthropomorphise him (except in a deep sense). The film’s main structural idea is facile and effective – Balthazar gets passed from owner to owner, experiencing (and bearing witness to) all kinds of human love and hate. His rendering is extremely corporeal, as it would be by such a materialist director – his beautiful (at birth) and battered (at death) body, his burdened movements, his deep eyes, his perky ears, his braying. His braying. Comical and tragic, this is the film’s key sound – a magnificent saxophone howl, rough as guts, from the spiritual heart, and unbearably moving.

The scenes where Balthazar is on his own (or in the company of other animals) are some of the most extraordinary cinematic scenes ever imagined, let alone realised. Balthazar is clearly a beast, but noble. His communion with other animals is strange and touching. Sure, as audience members we still anthropomorphise Balthazar and the animals in these scenes, but at the same time Bresson’s method is so unadorned and humble that there is something palpably truthful captured in these scenes.

And we’re talking pure Bresson here. I do not need to recap his uniqueness of cinematic vision. His stylistics have been described many times before. Suffice to say that in these two films in particular (and in Pickpocket to a certain extent, and maybe in The Trial of Joan of Arc, which I haven’t seen) there is a luminosity combined with a sharpness that is then applied to themes of cruelty, loneliness and honour that none of the other works have. The cinematography by Ghislain Cloquet in Balthazar and Mouchette is especially electric: the lighting is flat, but the hard sun combined with the widish angles makes for radiant and full-bodied images. And the usual Bresson stylistics are there, in the soundtrack, editing, acting, etc. Miraculous.

In fact, save for L’Argent, Balthazar is Bresson’s richest, fullest, most complex film. Its pace is extraordinary (the first five minutes alone contain a fully realized and wonderful pre-story) and its form is epic (even though it’s only 95 minutes long). Balthazar’s sorrowful journey is paralleled by Marie’s (Anne Wiazemsky), as she oscillates between purity (Jacques [Walter Green]) and evil (Gerard [Francois Lafarge]). She gets entangled in a web of dishonour (both sexual and social), from which she can’t escape. (Indeed, that devil l’argent hovers over this film – the scenes in the bakery have an uncanny resemblance to the scenes in the camera shop in L’Argent.)

Mouchette is like a reworking of some aspects of Balthazar. There is the same (semi) rural setting, the same focus on a teenage girl’s experience, the same cruelty, suffering, destruction. But its overall form is remarkably different: Balthazar is set over many years and composed of short fragments, whereas Mouchette is set over a 24-hour period and is composed of only several lengthy, unified sequences.

In Balthazar, there is a lovely fragment near the end of the film of Marie’s mother lamenting over her recent losses. Mouchette opens with a similar mother’s lament, in one of the cinema’s most stunning opening shots. It’s appropriate that this lament opens the film, for Mouchette (Nadine Nortier) is already far advanced in her suffering. Marie undergoes a process of corruption; Mouchette (though younger) is already world-weary and tarnished. It is a shock seeing such an earthy female type in a Bresson film – he usually casts waif or pretty types. Mouchette is caring and resilient, but also sullen and naive. The film perfectly captures her troubled existence. It is somewhat less effective in expressing the momentousness of what happens to her over the stormy night (maybe Bresson’s style is limited in some contexts?), but it is still a painful and moving film, probably Bresson’s most conventional and accessible (along with A Man Escaped).

Both Balthazar and Mouchette are graced by the presence of the very un-Bressonian actor Jean-Claude Guilbert, who plays the characters of Arnold and Arsene respectively. These two characters are drunk and disorderly, but Bresson clearly loves them. It shouldn’t be ignored what Mouchette’s arms do whilst Arsene tries to rape her. And later she calls him her “lover”. Bresson’s regard for the outcast, the injured, is exemplary. Mouchette’s final action is mysterious, but perfect symbolically: there is the world, and there is a soul, and sometimes … Let’s just say that there are dodgem-cars in heaven.

Robert Bresson has claims to being one of the cinema’s true geniuses. An exquisite stylist, he created a cinematic language onto himself. His films are both light and profound, both severe and tender, both bleak and life-affirming. Au Hasard, Balthazar and Mouchette are two masterpieces in a body of work full of great films.