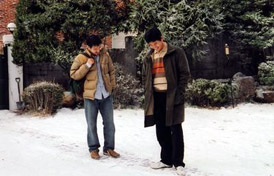 In the opening sequence of Woman is the Future of Man (Hong Sang-soo, 2004), the complacently settled Western art professor Mung-ho (Yu Ji-tae), unable (or unwilling) to bring his guest, an aspiring filmmaker named Heon-jun (Kim Tae-woo), inside his heavily mortgaged, gated suburban home, instead gives him a cursory tour of the grounds. It is during this awkward moment of forced domestic exile that Mung-ho offers his recently repatriated college friend a peculiar gift: an open invitation to track through the first snowfall of the season that had accumulated on his lawn. Accepting the offer, Heon-jun begins to walk exclusively in one direction before doubling back on his steps in order to leave only a single set of footprints in the snow. This seemingly cursory and incidental episode provides an introductory metaphor into the film’s pervasive theme of retracing a displaced and unrecoverable past: a recurring image in Hong’s cinema that, as David Scott Diffrient appropriately describes in his essay, “South Korean Film Genres and Art-House Anti-Poetics: Erasure and Negation in The Power of Kangwon Province”, reflects the characters’ propensity to manifest the Foucaultian crisis of essential identity through acts of erasure and negation (1).

In the essay, Diffrient cites Jisook’s (Oh Yun-hong) abortion in The Power of Kangwon Province (1998) as the culmination of her attempted (but ultimately, illusory) negation of a failed relationship. It is this subconscious impulse of self-purgation that also compels her to erase an earlier message from the wall at the entrance of her apartment (later discovered to have been written by her married lover) and strike out her cryptic, unseen writing on the sands of an empty beach, allowing the waves to sweep away the traces of her unarticulated thought. Similar acts of erasure are also used to comic effect in order to mask the evidence of a disillusioning affair in The Day a Pig Fell into the Well (1996) in the verminophobic Dong-woo’s (Park Jin-seong) harried dash to the shower immediately after his encounter with a prostitute. In Virgin Stripped Bare by Her Bachelors (2000), a discomfited Jae-hoon (Jeong Bo-seok) frets over what to do with the soiled hotel linen that bares the characteristic residue of Soo-jung’s (Lee Eun-joo) reluctant – and romantically anticlimactic – deflowering. In Woman is the Future of Man, the attempted undoing of the forced, traumatic coupling is treated with acerbic humour and pathos in the extended flashback sequence of Seon-hwa (Seong Hyeon-a) who, abducted and violated by an over-possessive acquaintance who had been recently discharged from military service, is put through an equally humiliating ritual of pseudo-purification. Obsessively and painstakingly washing Seon-hwa’s tainted nether regions, Heon-jun then proceeds to have sex with the desperate and naively trusting young woman under the narcissistic and self-gratifying pretence of making her “clean” again. In each episode, Hong illustrates that the erasure of human history is both an elusive and delusive act, propelled by the desperate illusion that there is no consequence to one’s actions. Through the characters’ sad, absurd gestures to undo that which cannot intrinsically be undone, Hong exposes the hubris of thinking that human existence is an elastic, deformable and reversible entity – shaped by external, social and environmental forces, yet retentively immune from their erosive and demoralising effects.

In illustrating the tendency of Hong’s characters to exhibit hubris through acts of abstract and fixated objectification and attempted erasure, the filmmaker reveals another critical dimension to support philosopher and historian Michel Foucault’s logical argument against the very existence of humankind’s theoretical “dual essence” that is both subject to its environment and ideologically autonomous. It is the resulting existential crisis created by the irreconcilability of human nature’s inherent duality – man’s impotence against negating the cumulative traumas and disappointments experienced throughout his lifetime – that inevitably defines the study of human sciences in Hong’s cinema. By capturing the seemingly uneventful, mundane and even trivial perturbations that periodically surface within the veil of culturally ingrained conformity and cursory appearances of socially adjusted, homogenised normalcy, Hong exposes the subtly imperceptible (but revealing) acts of despair that momentarily betray the human soul in crisis. It is this underlying crisis of irreconcilability that Hong, in turn, manifests through the seemingly fractured and novel editing that pervade his earlier films, from the subtle perceptional bifurcation employed in the structurally overlapping narrative strategy of Virgin Stripped Bare by Her Bachelors, to the unexpected change in point-of-view and idiosyncratically rewound time that occurs midway through the progression of The Power of Kangwon Province.

In Woman is the Future of Man, Hong further distils the innovative, elliptically edited structures of his earlier films to create a temporally linear, but still innately recursive thematic structure in order to study intrinsic patterns of human behaviour: this time, to capture man’s vain (attempted) negation of unrealised potential, loss of youth and fading attractiveness. It is this subconscious realisation of lost time and opportunity that Mung-ho rationalises to his students (in a daydream sequence that subtly reveals his own insecurities towards his ability to be accepted into the younger social circles of his students) as his friends’ desire to “return to their past”. Nevertheless, despite his overt attempt at self-exclusion from his friends’ sentimental malaise, his earlier words to Heon-jun similarly betray his personal crisis as he reveals that his deepest wish is to return to his alma mater and attain tenure – essentially dreaming of returning to his past – so that he may spend the rest of his career perpetually reliving his idyllic (if not idealised) college years.

Similarly, the parallel actions of the male protagonists throughout the film are manifestations of their delusive, self-validating rituals. A seemingly innocuous episode of Mung-ho’s display of toughness through a makeshift punching bag is later recalled in the image of Heon-jun’s drunken challenge for Seon-hwa to burn his fist with a cigarette (in his own dysfunctional version of a masculine strut). Moreover, both men unwittingly attempt an embarrassingly transparent, failed seduction of an attractive waitress at a café under the pretence of being inspired to capture her beauty through their respective arts (an intimate creative process that invariably calls for extensive nudity on the disinterested young woman’s part). In a stroke of understated irony, both men feign indifference after their polite, but vehement, rebuff (and ensuing audible gossip between the waitress and the proprietress) by awkwardly looking out into the street and abstractedly focusing their attention on a woman wearing a purple scarf. Bearing a passing resemblance to a college-aged Seon-hwa, the young woman briefly makes eye contact at each instance before looking away. The repeated incident involving the anonymous woman serves to illustrate not only their attempts to conceal their bruised egos (and therefore, negating their humiliating rejections), but more importantly, to reflect the reality of their respective relationships with the elusive Seon-hwa as their inadvertent, returned gazes become a symbolic gesture of a squandered, brief moment of connection with an old flame who is now irretrievably lost to them. The fleeting, seemingly innocuous crossed glance becomes a transitory moment of illumination into Mung-ho and Heon-jun’s own sense of frustrated incompletion, an autonomic impulse on which they are compelled to act by revisiting the object of their transgression – not to set things right with her – but to somehow rewind time and consequently negate their transgression…to make them “clean” again.

Marking Hong’s fifth feature, Woman is the Future of Man follows in a similar vein towards a more linear and straightforward approach to storytelling that he earlier implemented in his preceding film, The Turning Gate (2002). However, by drawing on the intricate structural experimentation of his earlier films to create a minimalist and stylistically unobtrusive, yet equally complex and incisive narrative structure for his familiar themes of negation, human relationships and existential crisis, Hong retains his reputation for innovation by systematically honing and paring down the elements of traditional narrative filmmaking ever further to its barest ingredients. It is through this progressive and rigorous distillation of cinematic narrative that Hong continues to strip away the layers of ambient distraction and peripheral noise in his understatedly lucid cinema, revealing only the fragile, liminal surface to convey the inalterable – and unerasable – essence of human truth.