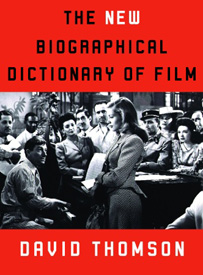 It’s true – there’s no Takeshi Kitano in the latest edition of David Thomson’s Biographical Dictionary of Film, no Clare Peploe, no Jan Svankmajer, no Pam Grier, and crucially for me, no Andy Lau. Given Thomson’s appetite for cool looks and sleek acting, I’m sure he would have loved Lau as much as any current male star – if only he would take the trouble to seek out and invest himself in the dynamics of Hong Kong cinema. But instead of studying a face as uncanny as Lau’s, this Dictionary seems concerned with compiling notes on Harold Becker and Tony Scott – and even the entry on Ang Lee is fairly listless. So the desire for hot, kinetic cinema has cooled, and been replaced by more of a cataloguing approach: one that’s dangerously close, I suspect, to the kind of tone the original book intended to avoid. There simply isn’t the same level of investment in faces, movement, and memory that made Thomson’s perceptions about those things great, or unforgettable.

Yet it’s undeniable that’s what they were – how many other critics have given us exhilarating ways of remembering, say, 500 artists? Pauline Kael comes to mind, but the rapture we associate with her corresponds more to the rush of her style, which was rarely adjusted to express the concerns of a particular film. On the other hand, Thomson has often been prepared to be patient, gradual, maybe even a little impersonal in trying to evoke what’s unique about a work – yet he also gives us the explosive sentence that matches our passion for a film. His discussion of Eric Rohmer is reserved and a touch wary – almost a simulation of Rohmer’s own watchful camera style – as it describes “these semiformal, literary inquiries into the sensibilities…of a group of people”. But when it comes to the look of Rohmer’s films – the shifting effects of natural light, the imbuing of scenes with warmth and colour, the dynamic of feelings changing – Thomson’s snapshots are breathtaking. The essay on Rouben Mamoulian begins with a sober assessment of the director’s ability to make “disparate material unmistakably his own”, before springing into instance after instance of his unique, flourishing use of colour and sound. That sense of restrained discussion suddenly giving way to the flowing sensual appreciation of a film is characteristic of Thomson, and it’s close to the feeling we get from movies. It’s why he remains, for me, the most influential film writer – the one who has opened up ecstatic aspects of Ophuls, Cukor, Leisen, and Demy.

I think that what Thomson’s critics tend to find most frustrating is his insistence on his impressions as being paramount in the assessment of an artist – after all, why should anything so unreliable be found in a dictionary? But I’d argue that it’s his emphasis on memory and the specific way things seemed and felt that define an essential condition of movies. Thomson has an uncannily close sense of how film, perhaps more than any other medium, affects our collective memory. I’m thinking of these words on Barbara Stanwyck:

It would be difficult to think of an actress so expressive of the early 1930s girl on the make – as intimate, shiny, and flimsy as a discarded slip, but with eyes ever sly and alert. So often with great movie actresses, we have a first thought of skin tone: with Stanwyck it is of tacky paint, too warm for glossy hardness (1).

That last sentence gives me an instant warmth; a number of faces flicker in my mind before Stanwyck’s – Bergman’s is first, perhaps in anticipation of the description “too warm”. In his descriptions of legendary actors, Thomson often recreates the texture of the screen image – the precise shading of the skin, the degree of soft focus – so that our associations with performers are instantly recalled. From his evocation, we sense that Stanwyck’s is an intensely tactile image, a face and a presence “openly inviting touching”.

The Dictionary gives us special insight into our perceptions of filmed faces: no one has been better at communicating the particular effect of a pale-eyed blonde, or how the camera photographs Asian-ness. Thomson is acutely sensitive to the way moral qualities can be visually suggested – for example, the way certain skin tones imply intimacy, while others allow the eye to remain “objective”. His interest is in the way film memory is formed – especially in his great, decorative treatment of actresses – and in finding out how those precious images might be stored. 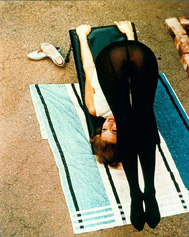 For that reason, I think, Thomson likes to highlight the idiosyncrasy of his impressions (he has admitted that he refers to Angie Dickinson as his favourite actress simply because she’s the most “far-fetched” of the performers he likes (2)). It’s a way of drawing attention to the “irrational” aspects of viewing films: what the eye is attracted to, the way it sculpts flesh and insists on perceiving authority in certain images despite reputation. The Dictionary is full of seemingly off-hand references to the idiosyncrasies of perception: Thomson notes that actors with unresolved personalities like Rita Hayworth can hold interest for longer than more determined ones, while a lack of acting technique can lead to the camera picking up “intriguingly shy details” in a performance. He asserts the value of “foolish but consistent” films like The Wind and the Lion (John Milius, 1975), in which visual tone and pace gleefully override narrative doubt. In the book’s high point, he tells us that the flamboyant director Henry Jaglom is not a good enough actor to play himself – someone more subtle is necessary. The implication is that “character” needs to be suggested to the camera differently than it does offscreen: overacting, it seems, is plausible only in real life.

While one of the pleasures of reading the Dictionary is indulging in its passages of “fine writing” – the entry on Alain Delon is one of the most satisfying appraisals of male beauty by a male writer – I don’t think such conventional elegance accurately represents either Thomson’s achievements or his particular interests. The key to Thomson’s aesthetic is that he rejects the classical values of the well-made film – the exquisite construction and tight style of a Kubrick or a Malick – in favour of something freer and more flowing, such as the “light, mercurial” spirit of Jonathan Demme’s early work. It has been said that he constantly feels the need to justify his attention to cinema – yet what better evidence is there that Thomson loves movies than the exuberance he seems to find in writing about movement, particularly dreamlike ease of motion? You can see the way his style fires up whenever it has the chance to describe fluidity and vitality: the constantly moving, circulating camera of Ophuls; the rapturous evocation of dance in Minnelli and Mamoulian; the revelation that Fred Astaire’s agility was contained within his name, “astride the stair”; the fresh face and “scapegrace” energy of Douglas Fairbanks; the delight in people being like “atoms whirling around to laws no one knows” in Altman’s California Split (1974).

One of my favourite parts of the book is the description of My Own Private Idaho (Gus Van Sant, 1991). Thomson loves this loose film, for its “sense of gaudy and brash colours against the sombre beauties of nature; the endless readiness for waywardness and the kindliness that gathers so many things in”. At his best, Thomson has the same eye: reflective but still responsive to feeling, ready to be carried into the flow of the next frame.