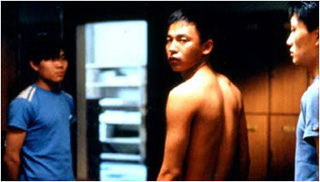 The third instalment of the 2001 ‘Silk Screen’ Collection, Wang Xiaoshuai’s Beijing Bicycle (2001), is an ode to the bicycle that has readily become a symbol of mainland China. Set in contemporary Beijing, the film traces the fortunes and misfortunes of two seventeen-year-old males, one from the city and one from the countryside. It opens with the arrival of Guei (Cui Lin) to the city of Beijing where he has secured himself employment as a courier. As Guei and the recruit of young employees stand in a uniform line, neatly dressed in their homogenous new attire, their assertive superior informs them that once they have earned six hundred yuan (based upon earnings of ten yuan per trip), they will be eligible to own the shiny silver mountain bike that they will use for deliveries. Thus, Guei advances upon the long and arduous road to success and the ownership of the mountain bike. However, just when he earns enough to complete the final payment on his now beloved set of wheels, the bike is stolen. Despite the overwhelming number of bicycles in Beijing, Guei’s determination to reclaim his (almost) prized possession leads him to Jian (Li Bin) who claims he purchased the mountain bike at the flea market. Consequently, the two protagonists are forced to engage in a struggle of strength (brute force carried out by Jian’s gang of friends) and willpower and resolve (as exhibited by Guei) to win the bike, a conflict that must eventually result in compromise.

The juxtaposition of Guei and Jian, and in particular their contrasting relation to the bicycle, highlights their differences in social standing and status. Guei is a humble migrant who has travelled to the city with dreams of gaining stability and a regular income. He finds himself struggling to survive in a foreign and chaotic environment in which traditional architecture and customs collide with an industrious and materialistic outlook. Alternatively, Jian comes from a hard-working and upwardly motivated city family who are concerned with providing Jian and his sister with a good education. Jian attends a co-educational school and joins his friends at video game outlets for after school entertainment. He is not extremely wealthy but as an urban dweller he enjoys an education, which is enough to clearly set him apart from Guei. Significantly, not only do Guei and Jian originate from very different backgrounds but the bicycle represents something very different and very unique to each of them. The mountain bike grants Jian status amongst his peers and impresses his girlfriend, Qin (Zhou Xun). He relishes the popularity, honour and independence that it provides, and is therefore unwilling to relinquish such an object. At the other extreme, Guei’s relation to the bike is one of practical need: he is reliant upon it for his new employment. But et this is not Guei’s only reason for needing the bike. Just as it represents status and pride to Jian, so it does for Guei. It symbolises his participation and success in the city of Beijing and makes him less of an outsider. In addition, ownership of the bike signifies Guei’s possession of a material object and partly meets his avid desire to attain material possessions in the fast-paced metropolis. The bike assists in shaping both Guei and Jian’s identity and is therefore a precious commodity for each.

Wang explores the changing dynamics of contemporary Beijing life through examining the experiences and needs of two young males from very different social backgrounds. In the first part of the film, the viewer witnesses Guei’s acclimatisation to his new environment as the camera documents the various problems he encounters whilst delivering packages and engaging in city life. Beijing is depicted as an urban metropolis, comprising McDonalds restaurants, modern high-rise buildings and traditional Chinese architecture. The streets are chaotic with cars and bicycles vying for position on the road and Guei must negotiate his way through the terrain of everyday activity. Significantly, Wang does not characterise Guei’s naiveté as a product of stupidity or mediocrity. Guei’s silence when he is confronted by new or unknown conduct (such as the bathhouse scene) simply acknowledges his difference and wonderment at the city. Wang’s subtle engagement with social issues via his protagonists illuminates the changing face of Beijing. Unlike his 1993 film, The Days that was blacklisted by the China Film Bureau and his other films such as A Vietnamese Girl (later titled So Close to Paradise, [1995]) that had difficulties passing the censors, Beijing Bicycle provides a more simple and understated exposition of the Chinese urban lifestyle. Nevertheless, Wang adroitly examines the experiences that the modernisation of China has generated for many of its citizens. Jian provides an apt example of a modern Chinese teenager who is trapped in an oscillating space between his submergence within popular culture and his appreciation of consumerism, and his connection to tradition via his family. Jian rejects his father’s values and traditions when he steals the family’s savings to purchase the mountain bike. His father’s enraged reaction is part anger and part disbelief that his son lacks any filial duty or obedience.

A very special component of Beijing Bicycle is Wang’s evocation of Beijing’s lanes and ancient alleys known as hutongs. Many were built during the Yuan, Ming and Qing dynasties. Traditionally, thousands of lanes, alleys and quadrangles became residential areas for the people living in the capital. In the burgeoning metropolis that is contemporary Beijing, these alleys and laneways occupy approximately one third of the city and still exist as dwellings for many Chinese city residents (despite their ‘disappearing’ status and gradual replacement by high-rise buildings). Beijing Bicycle contains some artful chase scenes throughout these ancient lanes and alleys. And Wang’s penchant for the cobbled lane ways and alleys alludes to the fact that Beijing is both an ancient and modern city. He highlights the degree of this difference within the city, which is partly what makes Beijing such a fascinating destination. The visual crossover between hutongs and modern high-rise architecture throughout the film is also symbolic of the bicycle, which has been forced to address an old versus new dichotomy. Traditionally, the purchase of a new bicycle was an important decision involving the entire family. Jian’s family still retain this belief and consider the bicycle an important family asset. Jian’s rejection of this attitude is indicative of his generation’s growing exposure to materialism and popular culture. However, Wang does not reduce Jian’s motivations simply to the selfishness of the younger generation but attempts to sympathise with Jian via his father’s empty promises of a bike. Inevitably, the bicycle’s status throughout Chinese history means that it takes on new dimensions in the contemporary setting. The inclusion of cars and public transport has assisted in changing the bicycle’s pertinence and glory. It is no longer the only form of transportation available to residents and therefore not the feted possession it once was. Nevertheless, the bicycle is still a crucial mode of transportation within Beijing, even if it is no longer the object to which most individuals aspire to own.

Wang’s exploration of a city divided between modernity and tradition is effective without offering jarring juxtapositions of old versus new. The camera’s smooth transition between different parts (old and new) of Beijing reflects the city’s interchangeable flavour. In the beginning, Guei and Jian appear very different individuals, but their love and desire for the bicycle (and what it represents) ultimately brings them together. Wang does not delve into the personal lives and motivations of the characters but focuses on the effect of their social environment and their place within this sphere. He depicts the new face of Beijing’s youth through Jian and alludes to the disillusion of immigrants from the country, such as Guei, who are strongly influenced by the allure of glamour and material wealth that the city offers. A secondary plot in which Guei and his only city friend observe an attractive young woman from afar, under the impression that she is an extremely wealthy city dweller exemplifies this notion. Later, they find that she was in fact a maid who liked to dress up in her employer’s clothes whilst left alone. Guei and his friend’s misconception of the woman’s social status is an obvious indictment on the beguiling nature of surface images and material possessions. Wang takes every opportunity to highlight the negative aspects of city life and comment on the remoteness of urban dwellers.

Beijing Bicycle marks his transition from a cinema of social realism to a more commercial realm. This less critical approach may not push the same boundaries as his other films, yet Beijing Bicycle still retains a preoccupation with relevant social issues. Wang’s ode to the Beijing bicycle is nostalgic (via his concentration on Beijing’s hutongs) without being overly sentimental. He willingly embraces the future and recognises the problems associated with change and a newly consumer oriented society. Ultimately, Beijing Bicycle proves an enjoyable film that oscillates between social melodrama and popular entertainment. Wang is a thoughtful and resourceful filmmaker that makes ample use of his chosen setting. Furthermore, the thematic concerns that emerge from this environment and the iconic bicycle are successfully intertwined with the protagonist’s personal motivations.

Wang’s Beijing Bicycle, which was winner of the Berlin Film Festival Silver Bears Award, is also a component of producers Peggy Chiao and Hsu Hsaio-ming’s ‘Tales of Three Cities’ series. Consisting of six films set in mainland China, Hong Kong and Taiwan, the series is designed to offer glimpses into the different urban Chinese social and political environments. Similar in theme to Vittorio De Sica’s The Bicycle Thief (1948), Sixth Generation Chinese filmmaker Wang’s rendition of the stolen bicycle premise is uncomplicated yet compelling and stirring. Wang effectively aligns the bicycle with certain experiences and stages in Guei and Jian’s life, such as the blossoming love for a girl and the gaining of independence and self-sufficiency. Beijing Bicycle offers a meditation on a contemporary Chinese city but is also an ode to the bicycle that is an integral component of Beijing life. The millions of bicycles that traverse the city today are testament to the significance and longevity of the bicycle. Wang does not offer a prognosis on the future of two wheeling Beijing but depicts the current bicycle climate. Indeed, it appears the bicycle will remain a symbol of Beijing and mainland China for generations to come.