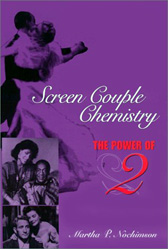 The unique excitement of this book is in the way it dares to apply science and truth to the watching of films. Film studies has never had much use for scientific theory, but then it has never paid significant attention to star chemistry, nor has it found an explanation for the effects of that charismatic energy: where it all goes.

Admittedly, screen chemistry is difficult to discuss: its sources are elusive while its impact cannot be quantified. Yet, Nochimson argues, the energy unleashed by certain star couples is so potent and subversive that it can only be talked about in terms of a scientific reaction – a kind of chemical fusion. She sees the “synergistic” screen couple as a special kind of matter with the ability to release extraordinary energy into the world – a force which can throw the audience “into contact with the subconscious” (p. 21) and change the way we think about desire. This proposition – part neuroscientific research, part conceit – works because this book is interested only in couples with staggering screen chemistry. Pairs like Astaire and Rogers or Hepburn and Tracy created such spectacular, often mysterious effects that their impact is hard to describe. How can we account for the specific energy released by Astaire and Rogers’ dancing in Top Hat (Mark Sandrich, 1935)? What are the implications of one actor’s sudden, entrancing move towards his partner – an impetuous energy which the audience internalises, and repeats to itself? It’s in this context of defining the intangible that Nochimson uses science to explain the transfer of energy people experience while watching films.

The other thing this book is interested in exploring is the truth. Unlike conventional film theorists, Nochimson does not focus on cinema as a constructed phenomenon, or an illusion of movement; she brings our attention back to the level of material reality, examining the on-set conditions, the physicality of the actors and, above all, the “documentary, mysterious energy of the human body” (p. 16). Looking at Clark Gable’s body onscreen, she focuses not on the filmic image but the objective reality of his presence: “he was in front of the camera and there was a specific magnitude and tone to the energy that his body projected” (p. 14). While it’s refreshing to find a scholar prepared to discuss films in terms of what actually happened as opposed to the manipulation of images, what’s unusual about Nochimson is that she regards “tone” as a real, measurable phenomenon – almost an element of mise en scène. Film studies has often ignored the charisma of individual voices and bodies, and the way it can allow audiences to dispense with an uninteresting narrative. However, Nochimson always gives primary attention to the way things seemed in a film – she looks at how a particularly puzzling gesture can absorb the audience’s gaze, causing a delayed awareness of other elements in the scene. Her specialty is identifying compelling or discordant moments in a movie – those which cut into the audience’s attention and “leave energy traces on the film frame” (p. 44). An example is this scene from Another Thin Man (W.S. Van Dyke, 1939).

Perhaps the most enigmatic and briefest moment…[is when] Nick and Nora prepare to go to sleep in one of the bedrooms… It is the end of the scene, and Nora hands Nick his pyjamas, but the scene does not end with the gesture. It lingers on the two of them as they stare at each other for no scripted reason and Nick suddenly grins and makes a clicking noise with his mouth that relates to nothing in the story. The effect is uncanny, suddenly infusing into the flow of events their personal dynamic and all the erotic and intimate possibilities under the surface of their daily actions (p. 98).

The sequence is absorbing because it seems to stand in for something about the couple’s relation to each other. The fact that the actors perform gestures for no diegetic reason does not make “story” irrelevant; rather, we feel that some kind of slippage has taken place, in which some aspect of the couple’s/actors’ chemistry has spilled over into the narrative and happens to be recorded onscreen. Nochimson notes how uncannily such “throwaway” moments can change the tone, or the apparent intention, of a film. I was reminded of David Thomson’s comment on how the films of Astaire and Rogers seem to “conspire” towards dance in their look and feel (1), even before any dancing has taken place. A film which features intense couple chemistry can appear to have an autonomous direction, or a desire, in itself; it can seem to “conspire” towards scenes taking place, or it can appear to be waiting for certain moments to happen. Perhaps this is what Nochimson means when she says that screen chemistry changes the way audiences experience desire; as viewers, we can have a strong sense of what a film wants – that it desires a star presence, or even that it is fighting against the narrative to enable a scene to occur.

The excitement of this book’s ideas are occasionally slowed by academic language – I don’t believe a phrase such as “multi-perspectival portal” belongs in a paragraph about obsessive energy. But at times Nochimson permits her writing to become as quick and free as the images she describes, and then the sentences are stunning. Her style shines particularly in her descriptions of choreography – not only in her depiction of Astaire and Rogers’ dancing, which demonstrates “a kind of openness…that verged on ecstasy” (p. 18), but in the case of William Powell and Myrna Loy, whose glances and gestures, verbal jabs and deflections add up to a choreography of stylised moves. Nochimson is able to take a scene and examine the imaginative implications of every movement – the erotic suggestion of a turn, the shaping of the mouth as a phrase is uttered, and the emotional tone of the bodies as they appear to the camera.

Nochimson has a distinctive and useful way of looking at the screen – she looks to see where the energy flows from a charismatic gesture, or to identify the angles of a face that grab one’s immediate attention. What she identifies as “energy” seems to be an accumulation of attracted gazes – for example, she refers to couple chemistry as a “freestanding energy vortex” (p. 4) and describes how an “energy ecosystem” can evolve around the charisma and mirrored gestures of two electric stars (p. 22). Again, the talk is theoretical, but her identification of the images which attract and absorb attention reflect a science based purely on instinct, interest, and pleasure. Nochimson’s suggestion of a film studies which recognises Hollywood films for their vitality and idiosyncrasy rather than seeing them as a function of ideology is certainly welcome, but I have one quibble. If this book is a celebration of unbound energy, then wouldn’t Katharine Hepburn and Cary Grant be a more inspiring choice than Hepburn and Tracy? What better example of an “energy vortex” could there be than their scene in Bringing Up Baby (Howard Hawks, 1938) where they circle the garden round and round at top speed, in pursuit of a game and a precious bone?