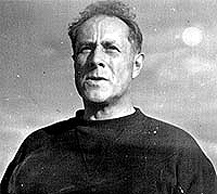 Assiduously dedicated to science, but – paradoxically perhaps – also fascinated by the tenets of surrealism and the extraordinary beauty of cinema, Painlevé never made a film that breached the strictures of documentary propriety, nor did he ever bore his audience. Instead, beginning in the late 1920s, Painlevé helped inaugurate the science film, but infused the nascent form with an artfulness that still sweeps us away today. He produced a series of more than 35 short works that disrupt our complacent understanding of the world by revealing the private, rarely seen details of underwater creaturehood.

Born in 1902, Painlevé was the son of a French prime minister and mathematician named Paul Painlevé, from whom he gleaned a predilection for precision and a love of science. In school, Jean Painlevé initially favoured mathematics, then veered toward medicine, and finally focused on zoology. As a child, he visited the cinema, and began taking photographs at the age of eight. In the mid- to late 1920s, however, Painlevé became infatuated with the emerging French avant-garde film culture, and counted among his friends such filmmakers as Jean Vigo and Luis Buñuel. As such, his first filmmaking efforts melded the precision of science with the oddities of surrealism. After his first screenings, when the scientific community railed against the incursion of “entertainment” into the stodgy world of facts, the young filmmaker’s art world colleagues would prove to be among his strongest supporters. Fernand Leger, for example, dubbed Painlevé’s study of skeleton shrimps and sea spiders, Caprella and Pantopeda (Caprelles et pantopodes) (1930), the most beautiful ballet he’d seen, while Georges Bataille published stills of crustaceans filmed by Painlevé in his magazine Documents.

Painlevé in turn responded by becoming an active supporter of French film culture. He was the founder of the Institute of Scientific Cinema and an outspoken critic and writer – in addition to his manifesto, he also wrote an essay titled “Scientific Film” in 1955, as well as essays on the potential of the emerging poetic documentary form. After World War II, Painlevé also helped rebuild the French film industry, contributing to the creation of the Artistic and Technical Center for Young Filmmakers; eventually to become known as the Institut des Hautes Études Cinématographiques (IDHEC).

While Painlevé’s body of work includes films about topics as varied as liquid crystals and the speed of racing cars, the bulk of his filmography is dedicated to discovering the mysteries that hover beneath the waves of the ocean. Using the first diving equipment developed, Painlevé, who always worked closely with his lifelong companion Geneviève Hamon, explored the ocean floor. When the technology proved too cumbersome or limiting, he built a gigantic aquarium in his study, where he carefully observed and documented his subjects in great detail.

Taking great pains to document the habits of mating, eating and locomotion among sea creatures and crustaceans, Painlevé made films that capture the grace and elegance of seemingly ungainly creatures like molluscs and sea urchins, sometimes using double exposures, fast and slow motion and close-up photography. The Seahorse (L’Hippocampe) (1934), for example, features dazzling black-and-white underwater images of dancing, bobbing seahorses, which, the narrator intones, are unusual in part for defying gravity and swimming upright. After 1929, Painlevé invariably added unusual scores to his films – in the case of The Seahorse, Darius Milhaud’s percussive music perfectly complements the darting motion of the aquatic newborns.

In his colourful 1956 film Dancers of the Sea (Les Danseuses de la mer), Painlevé examines the seemingly static starfish, revealing the five-armed echinoderm’s surprisingly fluid and mobile locomotion techniques, as well as its reproductive habits. The music by Pierre Conte perfectly complements the often lyrical images, underscoring the dazzling play of light through the water as the starfish flip and spiral in their slow motion ballet. At once breathtakingly graceful and strange, the film captures Painlevé’s unique ability to inspire abject horror and eerie fascination, a combination that most certainly endeared him to his Surrealist contemporaries (1).

While many of us consider the science or nature documentary a particular, and often arid, form, Painlevé championed the inherent beauty and mystery of the underwater creatures he studied, and of an emerging form of filmmaking. In France, Jacques Cousteau would soon come to dominate the field arguably inaugurated by Painlevé; Painlevé, however, remains its greatest visual poet.