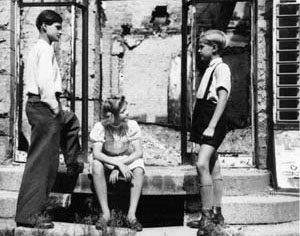 Germany Year Zero is the last act of the confession: it is acceptance in full of the drama, which therefore occurs later, when things have already changed, when the politics of ‘washing dirty linen’ has already begun.

… all that was necessary was a new type of tale capable of including the elliptical and the unorganised, as if the cinema had to begin again from zero ….

It seems an apt time to be screening a film such as Roberto Rossellini’s Germany Year Zero as the war in Iraq draws to a close and disputes over the post-war management of the nation take on a disturbing shape. Centring on the experiences of a young German boy wandering the streets of Berlin after Allied liberation, Germany Year Zero escorts us about a city excavated by bombs and missiles – a city constituted almost entirely of rubble. Watching Germany Year Zero while images of Bagdad relentlessly penetrate my living room, I cannot shake off the uneasy feeling that in the ruins of one city I see ghosts of the rubble of the other.

As Saddam Hussein’s presidential compound was occupied on April 7th of 2003, Fox News in the US ran live footage from the steps of the Republican Palace. Witnessing this media event, it became clearer to me than ever that Rossellini’s trademark immediate response to contemporary events has become the norm of mainstream media coverage. Rossellini himself began making films for the Fascist regime in Italy at the beginning of World War Two. However, Germany Year Zero is not a documentary about the war. Nor do we trust that what is displayed on our TV networks in times of war is any less a fiction.

Contention regarding the reality-status of what is recorded by the neo-realist camera is central to the disputes surrounding Rossellini’s cinema. André Bazin, one of the French film critics who championed Rossellini’s cinema, offers this definition of neo-realism: “What is neorealist is Rossellini’s direction – his presentation of the events, a presentation which is at once elliptic and synthetic.” (3) Under Bazin’s conception of neo-realism, the term can never be used as a noun: “Neorealism as such does not exist. There are only neorealist directors.” Neo-realism becomes an attitude, “an ideal that one can approach to a greater or lesser degree,” a distinctly aesthetic category. (4)

According to Bazin, Rossellini’s cinema does not simply offer us social-realism in the post-war context (as his Italian critics claimed) but a new approach to the real that undoes the determined spaces and conventions of the old cinematic realism. Rossellini describes himself making Germany Year Zero as “making an effort… to understand events that had involved me personally, and that had overwhelmed me.” For Rossellini, Germany Year Zero is less an exploration of historical facts than an exploration of “attitudes, of types of behaviour determined by a particular historical climate or situation.” (5) In contrast, we could say that a kind of ‘action cinema’ structure dictates the way our mainstream media coverage is edited. Deleuze tells us “We have schemata for turning away when it is too unpleasant, for prompting resignation when it is terrible.” (6) Rossellini, however, is not interested in allowing us this immunity, delving into what is immediate and painful to him in an attempt to come to terms with it. According to Deleuze, this experience of being overwhelmed by what is immediate and painful makes the sensory-motor schemata of ‘action cinema’ “jam or break” unsettling both character and spectator. (7) At the end of Germany Year Zero, Edmund stands atop an abandoned building and looks out over the streets of Berlin, an overwhelmed and exhausted spectator on the city.

Rossellini’s Germany Year Zero unravels the traditional action-reaction schemata of ‘action cinema’ to ask what happens to bodies and beings when their everyday patterns of living and behaving have been completely shattered by the stresses of war, like so many piles of rubble. Edmund, the child of Germany Year Zero, stumbles through his encounters with the city of Berlin, responding to characters who appear as if out of nowhere, hitting him like a “stray bullet” that send him in new, apparently random directions. (8)

He shifts, runs and becomes animated in vain, the situation he is in outstrips his motor capacities on all sides, and makes him see and hear what is no longer subject to the rules of a response or an action. (9)

Rossellini’s attitude to editing emulates this shattering: “I couldn’t care less about whether I get to the end of the movement so as to fit in with the next shot. When I have shown what matters, I cut: that’s enough.” (10) Deleuze points out that this fracturing of continuity emulates the war-ravaged city of Berlin: “it is precisely the weakness of the motor-linkages, the weak connections, that are capable of releasing huge forces of disintegration.” (11)

This distinctive experience of shattering and dislocation that occurs across Germany Year Zero perhaps explains why it was initially one of Rossellini’s least well received films. As Rossellini claims in an interview published in Cahiers du Cinéma in July 1954, “I don’t think it is possible to say anything worse about a film than what was said about Germany, Year Zero.” (12) Countering this criticism, however, Rossellini also reminds us of the importance of experimentation:

Experimentation, which ought to be the most precious thing for a new art form like the cinema, is stifled at birth by critics and by those who make films… In a world where it is increasingly difficult to orient oneself, this continual, almost maniacal attack on novelty – this process of destruction, which chips away at experimentation, demolishes and drags it into the mud – begins to limit subject matter, language, and eventually everything. (13)

Through his experimentation with cinematic form, Rossellini transfers to the spectator the bodily and emotional experiences of those recovering from the shock of war. Indeed, while mainstream reportage operates all kinds of cliched evasions, Rossellini’s cinematic experimentation enables us as spectators to develop our capacity for compassion. And we need this at the present time, perhaps more than ever.