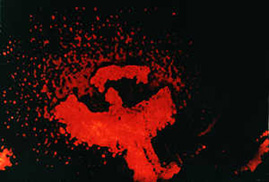 Jürgen Reble’s film works are marked by layers of residue, shifting abstract surfaces, chemical traces, scratches and blotches, as though a virus has infected the image, distorting its tone and colour, imbuing it with unusual textures and a strange aura. In these films destructive processes are the creative aesthetic agent.

Reble worked with the group Schmelzdahin from 1984. They collected Super-8 prints of anything from action films to porn flicks, home movies to Hollywood classics. They became interested in the decaying effect of weathering (Reble once threw a film into his garden pond and “harvested” it after a year had passed), bacterial processes and chemicals that disrupt the colour layers and eat away at the emulsion. They were made aware that film is not a fixed medium but that the image is transformed through material disintegration, and on projection this transformation is magnified as an integral part of the image. It became common for the group to use similar anti-preservation techniques in performance. Film loops would be subjected to chemical and other treatments, the effect was witnessed in real time until the loops fell apart in the projector. This auto-destruction was a crude but effective performance metaphor for mutability and the inevitability of physical decay, albeit hastened by the artists. While with Schmelzdahin, Reble developed a repertoire of processes and a practice that he has been refining and developing ever since.

The “Piccolo-Film” credit at the opening of Rumpelstilzchen signals it as a “found footage” film. Piccolo released Super-8 prints for the German home movie market and Rumpelstilzchen was a 1955 B-Movie version of the Brothers Grimm story. Thus, originating from a Super-8 print of a 1950s version of the nineteenth century Grimm Brothers’ version of a traditional folktale, the provenance of Rumpelstilzchen is interesting. The Grimms were known to embellish, and for their Children’s and Household Tales (1812–1857) they introduced a spinning wheel and a miller’s daughter who could spin straw into gold to the Rumpelstilzchen tale. The spinning wheel sequences become a recurring motif in Reble’s reworking, a visual analogy to the reels on a film projector. Metaphorically the “straw” of the Super-8 film that Reble spins into “gold” is the live transformation of film material off the reel that Reble regularly practices in the mixed-media film performance, appropriately entitled Alchemy.

The use of found footage has become commonplace over the past decade or so, with European artist filmmakers such as Matthias Müller, Martin Arnold, Gustav Deutsch, Douglas Gordon et. al., among the celebrated practitioners. Typically the practice involves representing and reworking existing films (early Hollywood, Hitchcock, B-movies, documentary, public information films, and so on being popular candidates), while recognition of the original is usually a significant factor. In this form of post-production art, the physical material of the medium is usually of less importance than refining meaning linguistically through processes of appropriation, structural manipulation, editing, repetition, and contextualisation. Reble’s usage is quite distinct from this. For him found footage is a physical raw source, often arbitrarily selected and ripe for materialist transformation, while he underdetermines narrative structure and privileges texture and resonance.

Rumpelstilzchen is not an exercise in meaningful, gratuitous deconstruction or recontextualisation; material distortions layer and abstract the images, the narrative is a fragmented, hazy, hallucinatory drama as images and voices loop and echo. This emphasises and reawakens the disturbing Gothic strangeness of the folk story. Imbued with a darker German romanticism filtered through post-industrial detritus, Rumpelstilzchen is in the time-honoured folkloric tradition of writing over; contemporary in its retelling, retaining traces of its earlier form.

The ghosts of early cinema haunt Chicago. Reble shot the originating film on a railway trip through the eponymous city. The black and white sequence resembles early film experiments such as Alexandre Promio’s (camera operator to the Lumière brothers) Liverpool Docks series (La Rade; Entrée dans Clarence Dock, Panorama pris du chemin de fer électrique I-IV, all 1896), where bulky cameras relied on carriage by a moving vehicle, and the Lumière films where trains loom towards the camera. It is also reminiscent of Ernie Gehr’s reworking of an unattributed 1905 film, A Trip Down Market Street Before the Fire, shot from a trolley car travelling along a San Francisco street, in Eureka (1979). Gehr slows the film to a snail’s pace, lingering on the fading, damage, tears and scratches of the original footage. Promio’s film, in the condition that it survives to this day, is also marked by the traces of age. Characteristics of this and other early cinema is the steady, impassive recording of urban spatial environments, coupled with a flatness inherited from its roots in the pre-cinematic entertainment of the panorama.

While works of early cinema survive due to diligent restoration work and archives; Reble’s urban panorama is born out of the reverse of preservation. Having forgotten about the footage for some years, it was literally “found” footage. Surprised by its discovery he proceeded to age the film, bleaching and distressing it to near disintegration.

In Chicago layers of chemical processes are an obscuring mist, drying marks, dust and hair left intact, sprocket holes printed through. The Windy City becomes vertical urban tundra of rectilinear blocks, as though it had entered an ice age of snap blizzards and freezing fog. Thomas Köner made a tone composition running dust from the film can through an optical sound system. In keeping with Köner’s other work, such as the CDs Teimo (1992) and Permafrost (1993), the resulting sound, redolent of icefloes and frozen wastelands, plays a crucial role in the film’s atmosphere. With this sonic panorama the film is a paradoxically claustrophobic journey, barbiturate and itchy, undertaken in vague detachment.

Zillertal is based on an old trailer that Reble had hung in trees in a garden for months, before treating it with chemicals. The ravages of the chemical reactions make it difficult to ascertain what connection, if any, the “original” has with Zillertal, the Tyrolean alpine area that borders Bavaria. It is tempting to imagine treks through traditional German folk forms as with Rumpelstilzchen, perhaps referring to the Heimat mountain film. However, there is no evidence of generic romantic idealisation, indeed it eschews conventional association and representation. The title actually refers to the way that mountainous shapes form in the chemically altered black areas of the film. The title is also ironic, as what can be seen of the original film appears to take place in a coastal setting. The weathering and chemical treatment has degraded the images to the point where figures in a bar, a woman in a bathing costume, men in military uniform, a fight breaking out, familiar types and sequences in cinematic dramatic convention, emerge out of and recede back into a stream of ochre and gold-hued gloopy shapes.

The most striking thing about the film is its jagged internal rhythmic structure. Because it is slowed down, the movement of the figures is in languorous slow-motion, but the soundtrack is the regular clicking of a projector, providing an insistent beat in punctuating synch with the visible frame changes. A third layer is formed visually by the residual traces of chemical treatment melding with the distressed film images. The combined effect of this is a rhythmic tension between strict immutable mechanical rhythm, fluid random molecular patterns and plasticised representation.

The title of Reble’s tour-de-force Das Goldene Tor provides a key to the essence of developments in his practice. The “golden gate” of the title refers to pagan mythology and the process of passing through the winter solstice to renewal. The film consists of sequences from what appear to be social documentary, people at a zoo, in a park, in the street in the snow; “nature” films of insects and reptiles; original, found and stock footage with no apparent associative or narrative function, tinged through the filter of Reble’s chemical treatments that gives the images a painterly quality, an arbitrary resonant abstraction.

The film unfolds slowly as a rite of passage through the winter. The intertitle dates of the first two sections are calendar clues: “Freiburg, Oktober, 1990” and “Darmstadt, Februar, 1991”. The next intertitle dispenses with dates altogether at “Bonn – Antarkis” and the forth and final hints at a destination, “Der weg zum licht fuhrt durch die finisternis” (“The way to the light through the darkness”).

A form of myopic mythopoeia, Das Goldene Tor confounds readings of interpretive “meaning”, however layered or subjective they could be; neither is it concerned with perceptual phenomena or visual processes. It is a self-contained metaphor, a self-actualising event through the experience of its passage. As it progresses its atmosphere becomes more intense, it is slower, it is hazily less distinct. Like the sympathetic layer of Thomas Köner’s soundtrack, it is “dark ambient”, a term usually applied generically to the type of music made by Köner. Reble’s use of images is ambivalent and ambiguous, which makes the appearance of short sequences apparently showing World War I trenches and the Earth from space, towards the end, a little surprising. It is as though attention is being drawn simultaneously towards and away from association, as though Reble is less concerned with the facts or the political and philosophical ramifications of human activity, than demonstrating its transience by creating an aesthetic barrier and a symbolic distance from it.

Over the past 20 years, a period that roughly spans the course of Reble’s career to date, film has become the last medium in which specificity can be an essential part of process. While it is distinctly materialistic in that it does not attempt to cover its apparatus of illusionism, there is no didacticism in Reble’s project: the concern is explicitly not to reveal the film processes or demystify the medium as it may have been in the avant-garde. In Reble’s hands film affirms its aesthetic force through simultaneously embracing and transcending its by-products; the residual artefacts of the results of accentuating and accelerating the processes of decay and age have become an aesthetic agent, an abstract producer of mood and atmosphere. One does not so much watch a Jürgen Reble film as become immersed in it. This is a particularly “cinematic” experience but one that heightens the ritualistic which, removed from the sophistication of cinematic codes of narrative and representation, returns to the sensual essentialism of spectacle, to a distant memory close to the uncertain excitement of discovering the unfamiliarity of a new medium. (1)