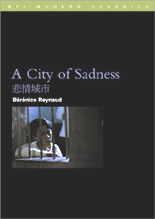 Bérénice Reynaud’s study of Hou Hsiao-hsien’s A City of Sadness is a welcome addition to the BFI’s “Modern Classics” series, not only because Hou’s film is an Asian presence rarely found in the series but also because it is truly a modern classic, being a key film for anyone interested in the new Taiwan cinema, and I suspect, for anyone interested in contemporary cinema from the ’90s onwards. Thus, the editors of the series are to be applauded for approving its inclusion. Yet, I can’t help but feel a tinge of disappointment at the outcome. The idea of the “Modern Classics” is surely a sustained textual analysis of the films’ narratives, implied in the first instance by the practice of naming all the editions after the films themselves. However, the volume is far too slim to do justice to the beguiling complexity of Hou’s masterpiece, and there’s an inescapable feeling that the analysis of the film is somehow cut down to fit the procrustean bed of the whole series (five-and-a quarter by seven-and-a-half inches, barely a hundred pages). This is hardly Reynaud’s fault. As a writer long interested in the three Chinese cinemas, and one who has authored a book, in French, on Chinese cinema (as well as being a critic-programmer who has programmed Asian films for the San Sebastian Film Festival), Reynaud is more than qualified to tackle an analysis of Hou’s work. But reading the book, you sense that she is often nudged for space.

The challenge in writing a study of A City of Sadness is to engage with the elliptical and circumlocutory way in which its narrative unfolds. Reynaud, however, skirts around the narrative, describing the plot in barely three pages after a preliminary chapter setting up the film’s historical background and some facts about Hou and the Taiwan film industry. The central failure of the book therefore lies in the inability (either the writer’s or the publishers’) to really tackle the narrative of the film – perhaps an understandable failure, given the immense web-like network of the family history as well as the history, politics and culture of Taiwan that underlay the structure of the film. Analysing such a structure would be a daunting task to any writer, and Reynaud circumvents it by appreciating the film for its web-like structure, looking at it as an aesthetic object. She does a more creditable job in providing background details: the February 28 Incident implicating the Kuomintang Government in a massacre of native-born Taiwanese in 1947 (a historical incident crucial to the understanding of the film); matters surrounding the film’s production such as brief biographies of the lead actors; discussions of the film’s technical and aesthetic qualities (much is made of the fact, for example, that A City of Sadness is the first sync sound film ever shot in Taiwan, and considerable passages devoted to Hou’s employment of traditional Chinese aesthetics).

Reynaud does discuss the narrative where it impacts on subjects and themes that come under section headings like “A Polyphony of Voices”, “Lost Spaces”, and “An Aesthetic of the Fleeting Moment”. But in these sections, the film’s narrative functions more like a sub-text, augmenting Reynaud’s citation of Deleuze to theorize about the fact that the “diegetic space of A City is both impressionist and fragmented”. Consequently, when she talks about the characters of the film, they seem detached from the narrative. There’s a sense that Reynaud is finally defeated by the complex structure of Hou’s film. Reynaud, however, is capable of the odd insight in her analysis. For example, in possibly the best section of the book “A Polyphony of Voices”, she makes the point that “Taiwanese from all walks of life were deeply marked by Japanese culture” and that the Taiwanese dialect is “laced with Japanese words and phrases”. Unfortunately, she doesn’t expand further on such an insight. The Taiwanese dialect is integral to the question of identity, and part of the significance of Hou’s film is that it delineates the sense of separateness that the Taiwanese feel, and the cultural and political division fostered by the language division between Taiwanese and Mandarin speakers. That this sense of separateness could have been derived from the Japanese occupation of Taiwan for 50 years is a subject not often broached. Reynaud touches on the subject but there is an opportunity lost to develop on it in her discussion of Ozu’s influence on Hou in the section titled “Hou and Traditional Chinese Aesthetics”. Here, the startling discovery that Hou did not see Ozu’s films until the end of the 1980s (that is, until well after Hou had already made some of his best films deemed to be influenced by Ozu) might suggest that Hou was much more influenced by Japanese aesthetics as a lingering cultural trait fostered by the occupation.

Still, Reynaud is sensitive to the whole cultural aura of the film as it is manifested through the “polyphony of voices” and particularly the device of voiceovers by the two female characters Hinomi (Hsin Shu-fen) and Ah Shue (Huang Tsien-ru). When Reynaud identifies the central tragedy of Chinese culture as “the wound of fractured identity, the sadness of not being able to understand other Chinese”, I wonder whether such a statement would sound as poignant coming from a Chinese writer attuned to the reality of fractured identity. Interestingly, the “tragic aspect of the Chinese condition”, to use Reynaud’s resonant words, is not only played out in the dialectical differences and the interplay of voices in the Chinese-speaking world, it is also played out by scholars and writers who must grapple with the problem of Romanising Mandarin names, either through Pinyin, the system in the Mainland, or Wade-Giles, the system in Taiwan, with the further complication of rendering names in dialect, for example, Cantonese names (and perhaps raising tragedy to the level of farce, all these systems are often mixed together).

On the whole, Reynaud has done us all a service with her study of A City of Sadness. She has not only brought the film back to attention but has refocused our sights on its director Hou Hsiao-hsien, a filmmaker as likely to arouse controversy as praise. In a sense, Hou embodies another tragedy among the Chinese (and one supposes, among cinephiles everywhere) in terms of how they see cinema as polarised opposites of entertainment and art. Reynaud shows that the reception of A City of Sadness in Taiwan, rooted as it was in the audience’s sense of history and moment, makes nonsense of the tension between entertainment and art. Hopefully, Reynaud’s study will work in the long run to dispel the notion that Hou is an esoteric, boring director. Reynaud discusses Hou’s “aesthetic of the fleeting moment” as a way to conclude her study. The film ends on a visual motif shot of an empty dining room, registering a feeling of loss and sadness “towards which the movement of the entire film is directed”. Hou’s substance lies in the emptiness of the shot, which Reynaud explains as “a light born out of darkness and silence out of noise”. In other words, Hou achieves eternity out of the fleeting moment. Reynaud’s book, being slim, represents a kind of fleeting moment in its own right, but it may well be the reader’s first step towards a lasting recognition of Hou Hsiao-hsien.