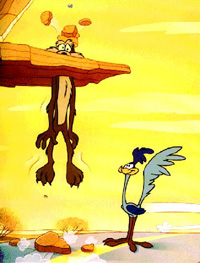 What makes a Jones film unique? His characters were born into an age of lunacy, and their antics hardly seem exclusive. Married to the projector, ink didn’t just break the taboos of our physical world, it smashed them. But whilst characters hung motionless in the air, social mores were collapsing. Murder, beatings and cross-dressing were more than just acceptable in this Technicolor universe, they were expected. Animation had created its own world, with garish colour, bending, warped figures and fractured psyches. Clearly, it was a very different place from Earth.

And yet, something connects us to these wonderlands. For Disney, it was aesthetic and humanistic; classic tales and breathtaking beauty. For Warner Brothers, it was not. Slaving away in Termite Terrace, the Warners crew didn’t have this luxury. Strapped for cash and time, they worked fearlessly, shackled by limits of Swiftian proportions.

Creatively, such confined quarters begat an animation of extremes. Stripped-down symbolism married itself to explosive characters. What makes a Jones film unique? Extreme economy. Always extreme, always economic, Jones’ work lives in the badlands of the animated universe. Even the most urbane character, Pépe Le Pew, reflects this piratical heritage.

For Scent-imental Reasons (Chuck Jones, 1949) was only Jones’ third outing with the skunk, and it was an Oscar winner. Although it was the fourth Pépe cartoon, the film represents a touchstone for how we view the character today.

Jones never wasted time on backgrounds, and the film introduces us to a France that is more naturalistic than its successors, but rife with symbolism nonetheless. Straight, simple lines and a soft, pastel-quality to the drawing give us a Gallic paradise unsullied by cars, people, or essentially modern life. This stops shy of caricature, but it is a clear abstraction. Such a delicate, ethereal background makes a perfect foil for the bold outlines of Pépe and the other characters.

A great lover of the still, Jones hated using dozens of drawings to convey feeling. Rather, he would cram a figure with emotion and then hold it for a few seconds. Pépe demonstrates this wonderfully as he is introduced. Look at his relaxed stance and open posture. Always light on his feet, the great bushy tale a perfect frame, there is a lot of the pantomime in Pépe. He also adopts the genre’s self-awareness, turning to us, playing, not just with the hapless cat, but with us. 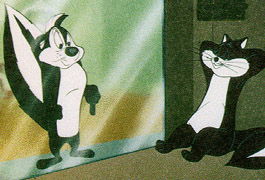 The film’s domestic setting is uncommon for the series. Usually, Pépe’s conquests range across a variety of outdoor settings, but confining it to one house Tom and Jerry-style effectively ratchets up the tension. The poor cat tears up doors and walls, defying gravity to escape Pépe’s clutches.

It is this desperation that inspires the most memorable part of For Scent-imental Reasons. After the cat locks herself in a glass cage, Pépe seems in danger of failure. Deprived of his voice, he relies on fierce gestures and soaring strings to convey his desperation and impotence in the face of disgust.

But his love is crafty as well as strong, and he lures the cat out, starting the game again. Note that the strength of Pépe’s passion is very literal: he is larger than the cat, light on his feet, but very solid. As he “pronks” around the house, we sense the driving insistency that lifts his paws. Looking at the bedraggled cat and her buckish pursuer, the moral for all these cartoons is look what love can do to us. At the end, the situation is reversed (for the first time, but not the last) and Pépe becomes hunted. Love is a heady, hilarious brew, but also a fickle one.

Desire seems to be the only thing uniting the quaint, postmodern world of Pépe to the cruel limbo that Coyote lives in, but it’s a powerful link. The universe of Road Runner and Coyote is vintage Jones; a searing burlesque of economy and extremity. Really, its only inhabitant is Coyote. Road Runner, sometimes kind, sometimes cruel, unknown and unknowable, seems merely another torture this world offers up.

Nothing ever goes wrong for the bird. Physics itself bends to his will just as it thwarts Coyote’s. This is an important point; nature is against the Coyote. Despite his shaggy appearance, his absurdist predicament is all too human; it is an acknowledgement of failure. And the bird? Perfection. Coyote doesn’t want a meal, he wants a life, and he uses gadgets to fake it.

Zoom and Bored (Chuck Jones, 1957) illustrates this perfectly. A chase scene underlays the credits, establishing that this battle began long ago. Coyote (Vulgaris Famishus) is shaggy and unkempt. Arms and legs flailing, Jones’ “full animation” gives him more limbs than Shiva, but despite his obvious desire to be everywhere at once, he can’t fake Road Runner’s omnipotence (1). Bold, clean lines make Road Runner (Birdibus Zippibus) move with an extreme economy. He stops when he wants to stop, and starts without warning, or run-up. Compared to Coyote, he has an enviable degree of control.

These two combatants tear through an unpopulated desert. Philip DeGuard’s skies look scorched; sand-blasted custard turned the colour of burnt cream. Rising up into the lifeless infinity are countless ochre cliffs. These structures share something with Monument Valley, but they are crazed: out-of-proportion and Dali-esque. Small, stunted plants and the occasional cactus dot the landscape. This background is highly symbolic. Banished is Disney’s style; rich mise en scène, forever breaking the walls between passive and active. This setting is a stage, an arena. It is drawn very differently from our protagonists and their weapons.

And what weapons! For Coyote, it is the Acme Company’s suspiciously naturalistic gadgets that blow up, refuse to work, or – as in the case of the wall – take on the malleable physics of his environment. Almost always, these malfunctions are very simple. Observe the catapult, the bomb, and – of course – the anvil.

Road Runner’s weapons are more subtle. A simple “Beep! Beep!” is enough to scare Coyote off a cliff, or into the disturbing red truck (who, really, is driving that thing?). More often than not, though, his advantage is simply knowledge. He knows where the cliff will break, how the birdseed will fail, and where the rock will land. Road Runner is never scared, and it is this confidence – more than anything else – that Coyote is so desperate to capture.