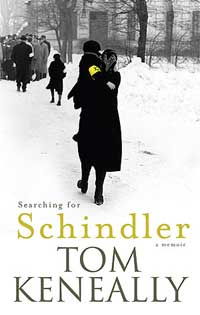 Given the barbarous German persecution of Jews, Gypsies and homosexuals, to name just a few, it is not surprising some of World War II’s oppressed fought back. What is surprising and most noble is that there existed people who, though in no personal danger, attempted to undermine the Nazi system, putting their lives on the line. One was Oskar Schindler.

Australian author Tom Keneally came across the story of Schindler when he went to buy a briefcase in a shop in Los Angeles. At the Handbag Studio just off Rodeo Drive, Keneally met Leopold Pfefferberg Page, commonly known as Poldek. The leather merchant told Keneally:

After much insistent persuasion, Keneally finally agreed to write the book, Schindler’s Ark (1982), renamed Schindler’s List in the US, where the publishers thought that Ark in the title would be offensive to Jews. Keneally still bristles over this.

Searching for Schindler is Keneally’s memoir about the process of moving from leather-shop anecdote to written manuscript to publishing phenomenon (it won the Booker Prize and was an international best-seller) to unfilmed screenplay ignored by a procrastinating director to a finished film that won seven Academy Awards, including Best Film. As Poldek predicted, “You’ll get an Oscar for Oskar!” (p.181)

Bits of the story will already be familiar to many, but they are worth hearing again, especially the meeting with Poldek, the research trips to Poland and elsewhere, Poldek ever at his side, the writing of the book. It is all effortlessly told by Keneally, who knows a good yarn when he hears one. Schindler may be the original hero, but Poldek is the new one; without him, Schindler would have remained a largely undiscovered footnote of history.

Strangely, though, Keneally wanders off-track at times to include personal family history and his trips to Eritrea (the subject of Keneally’s later novel Towards Asmara [1989]). No matter the connections Keneally sees between Schindler and Eritrea, let alone his family situation, he certainly doesn’t convince this reader that any of that material has a place in a book called Searching for Schindler.

Fortunately, the memoir revives with the entrance of Steven Spielberg, though once Spielberg obtains the screen rights to Keneally’s book he seems to do very little for a very long time. Keneally is peeved that the film took so long to get made, and he doesn’t play fair by Spielberg by fully describing all the director’s other work commitments and life pressures. Each film Keneally announces Spielberg is doing is made to feel like a betrayal of the Schindler project. Still, Spielberg can’t have been too offended, because the dust jacket carries his ringing endorsement: “Had I read Searching for Schindler before making the film, I may have made it an hour longer. I owe you so much. The world owes you more.”

Once filming starts, Spielberg emerges in Keneally’s account as a hero, even if he didn’t use the script he had commissioned from Keneally. On what remains a tender issue, Keneally is commendably even-handed.

There is little insight of the “making-of” kind, largely because Keneally only visited the Schindler set occasionally. But for those less familiar with the minutiae of film production, this section will prove an engaging, if brief, encounter with a major director at work.

Searching for Schindler is a light, pleasing read, full of fascinating detail (especially in the harrowing Krakow sections), but sometimes feeling just a little too casually penned. Keneally certainly misses the chance to come home with a wallop, completely underwriting his ending. Still, as Australian film memoirs go, it is unquestionably one of the best.

It is extraordinary to think that a largely unknown (in world terms) Sydney Catholic should take what Poldek told him in Beverly Hills and turn a Holocaust anecdote into a film and book that had – and has – a profound impact on the world’s understanding of how easily people can be persecuted, of how one deeply flawed individual can do so much for so many.