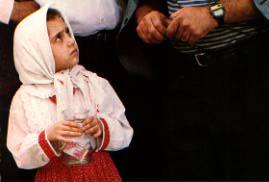 A seven year-old girl, Razieh (played by non-professional Aida Mohammadkhani with adorable courage and a perfect pout) desperately wants a new goldfish for the New Year, despite the fact that her home has a pond that’s already full of them. Looking down on the water, all Razieh sees are skinny little fish, but the ones at the store are chubby! At home in the courtyard, her older brother Ali (Mohsen Kalifi) somehow convinces their mother (Fereshteh Sadr Orfani) to let Razieh take the last 500 toman note out of her wallet and into the streets to buy the prized fish. As if in a fable, Razieh loses the bill along the way and the rest of the film consists, simply, of her desperate wanderings as she tries to find the money and buy the fish before the shops close.

The White Balloon shows us the world through Razieh’s wide eyes. Critic Adrian Martin describes the adults – as seen by Razieh and her brother, who comes to find her – as “fuzzy, fascinating creatures; they’re frightening strangers one moment, tender angels the next.” (1) For instance, a soldier in the street filmed in long shot initially appears devious as he ducks behind a car, but later in medium shot as he sits by Razieh, he’s revealed to be a slightly homesick young man eager to speak to someone who reminds him of his sister. In another instance, a shop owner looms over the children huddled over a grate that the money has blown into. Ali’s initial dread at this tall, curious figure dissolves when the owner cracks a joke and shoots a smile at Razieh, clearly indicating his intention to help them.

In keeping with this, when speaking about his most recent film, The Circle (2000), Panahi stated that “In all my films, you never see an evil character, male or female. I believe everyone is a good person.” It takes exploration and discovery to focus the fuzziness that Martin mentions. Panahi’s equally pertinent comment that everyone lives in some kind of circle of varying size – “either due to economic, political, cultural, or family problems and traditions” – and that his goal in making films is “to make them try to expand the size of the radius” illuminates his primary stylistic trait of a long shot that passes from the path of one character to the path of another without cutting. (2)

Like The Circle, The White Balloon literalizes Panahi’s philosophy in the formal choices of its opening. The film begins as a three-minute-long ‘survey’ in which, within the tight radius of a frenzied neighborhood bazaar as sellers do last-minute business an hour and a half before the arrival of the New Year, we see almost all of the characters that Razieh will subsequently come across in her winding path.

The camera passes from two street performers who will weave in and out of the film to a man exiting a barbershop that Razieh will encounter in a launderer’s shop in a later scene. Sliding off his path, the camera picks up on an army jeep that drops off the soldier Razieh will meet toward the end of the film. As the soldier walks down an alley, a teenage Afghan balloon seller enters the frame and Panahi’s camera follows him as he makes a sale. And then a middle-aged woman appears, looking confused, and Panahi zeroes in on her for a while. Before the film cuts, she asks the balloon seller directions (humorously, he points both ways) and we follow her for about 30 seconds into the next shot. We soon learn that this character is Razieh’s mother, who is trying to weave her way through the crowded bazaar to find her lost daughter.

These explorations through the crowded streets that open up an infinite number of other paths, stories, and interconnected routes of encounter suggest the presence of so many important people or sounds remaining outside of the frame, and intimate the levels of the world beyond that which Razieh encounters. Razieh’s father, for instance, never appears onscreen, but we hear him yelling dictatorially from his underground shower. Also, objects like the radio that gives us real time updates on the countdown to the approaching New Year are never seen, and dialogue such as that which Ali whispers into his mother’s ear, finally convincing her to allow Razieh to take the money, is never heard (and according to the logic of a child intent on buying a fish, is never even speculated upon). On top of all this, Razieh is shown tearing down a street when she stops to avoid crashing into another passing girl, also about seven years old, perhaps out on her own adventure, winding her own path, and expanding her own ‘circle.’

At the end of the film Razieh and Ali are no longer the point of the camera’s focus. (3) They run in and out of the camera’s gaze, which has now passed its attention onto the Afghan balloon seller. How does his circle expand? The year is over – the circle of the earth around the sun has passed (Persian New Year is at the Spring Equinox) and Panahi freezes the frame, not ending the film, merely pausing it. Another film can pick up the Afghan teen’s journey from unknowingly meeting Razieh’s mother in the opening frame, to where ever he goes after the New Year begins.