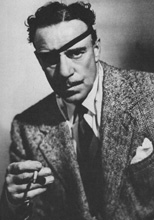 “Here’s to girls and gunpowder!”

When Peter Bogdanovich was interviewing Raoul Walsh and mentioned Miriam Cooper, with whom Walsh had made 18 movies, Walsh replied:

“I was married to Miriam Cooper. Don’t put it down, turn [the tape recorder] off: it’s a nice sunny day. Now the clouds will come and the wind is roaring when you mention [her] name.” (1)

Walsh was 86. Forty years had passed since his split with Cooper. Yet the past he could not support still launched him into Irish images, taking us with him. Welcome to Walsh’s cinema, to love and adventure in the first person.

Living is adventure in Walsh’s movies, and usually begins as escape — from shame, crime, or life. Walsh left home at 15 when his mother died, unable to support the house without her, and for years propelled himself on an odyssey to nowhere — Cuba, Texas, Mexico, Montana, punching cattle, toughening himself, taking blows, forming callouses so thick he felt ashamed to shake hands. By accident he landed in show business, because he could ride a horse. Then D.W. Griffith decided to turn him into a moviemaker. And he met Miriam Cooper.

And so for 50 years Walsh made movies of his Irish fantasies. Like him, his heroes, and women too, have neither book learning nor ancestry, only themselves, youth, and infinite bravado. There are few families or children to get in the way, and scarcely a mother. Whether in soaring epics like The World in His Arms or hardscrabble tragedies like The Roaring Twenties (1939), Walsh’s heroes incarnate the dreams and miseries of first-generation Irish-Americans like himself, parvenus, with something to escape from.

Women are for loving. Walsh’s never cry. They like watching their guy being beat up, knocked down, given comeuppance — and coming up off the canvas to win. For their world is full of outrageous injustice, mutilated bodies, innocent lives destroyed. “You gotta fight,” says John Wayne in The Big Trail (1930). “That’s life. And when you stop fightin’, that’s death.”

Walsh is famous for action. And it’s difficult to think of vaster vistas in the whole of cinema than some of those in The Big Trail and The Tall Men (1955). But most everything in his movies happens on faces. As in Griffith. Griffith invented the face in cinema, insofar as he made an art of it, as he did with parallel montage. But perhaps it is not Griffith but Griffith’s pupil who invented the face gazing into the lens, the point-of-view shot and the geometry of Hollywood editing, and cinema in the first person.

For example, in The Birth of a Nation (on which Walsh had served as Griffith’s assistant and played Booth, 1915), Griffith shows us shots of

But we do not see the squirrel from Marsh’s perspective, nor her from the soldier’s; Griffith’s camera stays in the orchestra.

Whereas in Walsh’s first feature, Regeneration, made in 1915 a few months after Birth, Walsh cuts from

and not only do we see the boys from Nilsson’s perspective, but we see her eyes beckoning straight into the lens, directly at us; Walsh’s camera is part of the action, part of the character, and makes us part of them as well. Regeneration, astounding for 1915, marks the start of a new cinema.

Walsh’s cinema is not presentational like Griffith’s, or self-reflexive like Godard’s. It is interactive. In half a dozen movies, characters actually turn and speak to us, the audience, and in The Strawberry Blonde (1941) there are sing-along song boards. Far from liberating us from naive faith in movies’ storybook realism, Walsh makes us complicit. These adventures become almost vicariously our own. For Walsh’s heroes and heroines, while searching the four corners of the world for they-don’t-know-what, search the corners of the lens as well, gazing not just past it, as in many movies, but flirting on its edges, as they flirt with each other — and with me. Suddenly her eyes pierce the lens’s center, baring her soul, interrupting my safe distance from her. I sense the frail creature inside the flamboyant exterior. And when she says “We are lovers and the world is ours,” she will be gazing into my eyes steadily. 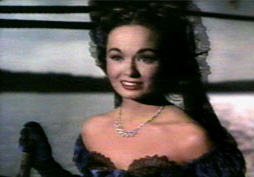 This emotion from the actors, and between them, is not something they themselves create in Walsh — even actors as empathetic as Olivia de Haviland and James Cagney in their reunion scene in The Strawberry Blonde (the one mise en scène Walsh pats himself on the back for in his autobiography). The emotions are created by Walsh’s flirting angles. The effect is a bit like in Ozu, people gazing at us as though we share the same space (and like Ozu Walsh is often willing to violate the axis to get the gaze), but in Walsh there is flirtation. 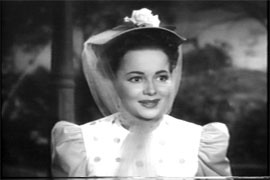 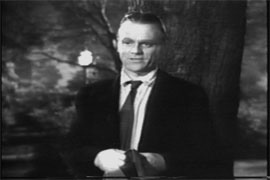 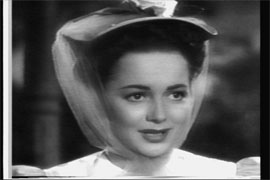 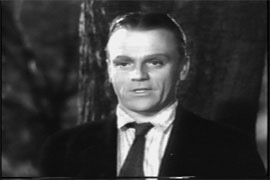 All the feverish action of Walsh’s characters, all their energetic diagonals across Walsh’s frames, mount kinetically (not in a natural flow but in heightened fragments) toward rhyming reverse-angles of eyes — eyes well lighted by Walsh and charged with motion, life itself, our inner self, never still.

Not surprisingly, people do not notice Walsh’s technique at such moments. In contrast, Clark Gable’s love scenes are boring in the CinemaScope Tall Men but wild in Band of Angels (1957), not because Jane Russell is boring and Yvonne De Carlo wild, but because Tall Men’s CinemaScope camera is so distant that eyes are not seen (or lighted). Close-ups are not needed with a BIG screen, it was assumed in the first years of CinemaScope — as in 1930 with the 70mm Big Trail, when John Wayne failed to achieve stardom because no one could see him. In contrast to later scope films (Esther and the King [1960] and A Distant Trumpet [1964]), The Big Trail and The Tall Men, glorious in their outdoor poetry, lack the intense intimacy around which everything must turn.

Eyes are important for truth; whereas public identities are constructed for commerce and fantasy. “People only envy a successful man. They envy a failure nothing,” says Robert Ryan in The Tall Men. So Walsh’s people bluster, all of them. Every Walsh character dreams of being a “big shot.” Infamous burlesques on the inflated images they project for public consumption occur in The Bowery (1933), Gentleman Jim (1942), White Heat (1949), etc.

In Captain Horatio Hornblower (1951), the tawdry pretensions of a South American dictator called “El Supremo” and a British admiral called “Mucho Pomposo” are set in obvious contrast to the modest and authentic heroism of Hornblower (Gregory Peck). But one reason Walsh is a great moviemaker is his all-but-tacit outrage at the similarities of the three men. Hornblower bears a name no less unmodest, wears a uniform too big for him, and licenses his fame to a pub, “The Hornblower Arms.” Like El Supremo, he bows to his own image and casually slaughters those who stand in his way. He has a man publicly flogged, “cutting his back to pieces” not for punishment but to uphold authority even when wrong, and yet disapproves when El Supremo displays victims for the same purpose.

There is something missing in Hornblower. Love is not what his adventure resolves around, it would seem, and yet the emotional center of Hornblower, perhaps of all Walsh, comes as the hero reads the letter left by his dead wife. While the camera’s gaze wanders over the room she lived in, and her things, we hear her voice, stern and courageous, like him. “Do not forget me completely, Horatio, when I’m gone. Though we’ve been married for 15 years, in all that time we were together for only 15 months.”

Walsh typically elides Hornblower’s grief and guilt. There is only a passing reference to two weeks in the dark, before a fresh summons to war rescues him. The loneliness of command is a frequent Walsh theme, but it is not merely duty that sustains Hornblower. There is often a lack in Walsh’s heroes which they trust glory will fill — in vain.

But eyes show the link between reality and image. Veritable melodramas of eyeballs mark Errol Flynn’s decisions to sacrifice his life in They Died with Their Boots On (1941) and Uncertain Glory (1944). And in The Bowery, a world so hammy that it seems normal for George Raft to strut like a bouncing penis, the characters keep spying the edge of the lens, so that performances often seem realities captured right now by the camera.

This wisp of cinéma vérité adds spice to the rollicking deeds of improbable heroes like Troy Donahue, Rock Hudson, and the spunky starlettes who trudge the wilderness perpetually bare-chested. Walsh is unconcerned with historical accuracy, specific places and times, or context. There are few communities in all his movies. The men who follow the hero are rarely individuated (Objective, Burma! [1945] is just Errol Flynn, in effect), nor do subplots clutter the single thrust of the action. Walsh plays to our voyeurism, and the fact that we know our triumphs are fantasy adds to their poignancy, for Walsh’s boisterousness is in truth a mask for melancholy, as when he speaks of Miriam Cooper. Often heroes fail; often love is painful; massive stone mountains portend doom in many title sequences; we lead those who trust us to their deaths; crosscuts become murderous phallic thrusts in Pursued‘s (1947) obsessional compositions. We must not wish for too much happiness. It is not the deeds heroes do that count, but who they are, what they feel, the passions that propel them and overwhelm them, the regeneration they attain, somewhere between image and reality. “Honor!” exclaims Walsh’s last hero, in A Distant Trumpet, “I probably want that more than anything in the world.” At the end of The Tall Men Robert Ryan says of Clark Gable: “He’s what every boy thinks he’s going to be when he grows up and wishes he had been when he’s an old man.”

If we find ourselves almost believing that we are flying over Bagdad, or bounding the main (bare-chested) with the world in our arms, it’s because in this intensely first-person cinema Walsh makes us want to believe. Maybe it’s Walsh who invented Hollywood. 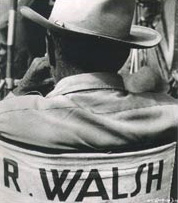 Titles I do not know to survive are preceded by an †.

† The Outlaw’s Revenge / In the Dawn of the New Republic (1915) Mutual. Extracts from Life of Villa. Co-director: William Christy Cabane. Superv: Griffith. 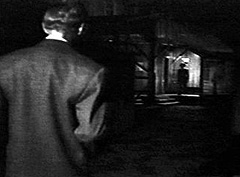 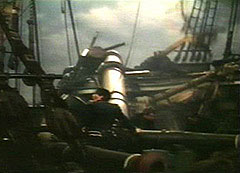 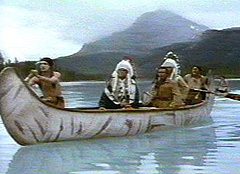 “Raoul Walsh,” episode in Richard Schickel, Men Who Made the Movies, PBS 1973.

The Films of Raoul Walsh
Informative and in-depth analyses of key aspects of the man and his work.

They Died With Their Boots On
Very little text but what a great poster!

Click here to search for Raoul Walsh DVDs, videos and books at