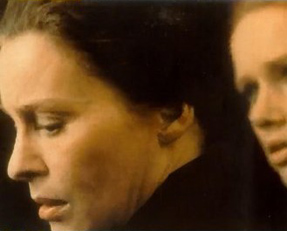 All my films can be thought in terms of black and white, except for Cries and Whispers. In the screenplay, I say that I have thought of the color red as the interior of the soul. When I was a child, I saw the soul as a shadowy dragon, blue as smoke, hovering like an enormous winged creature, half bird, half fish. But inside the dragon, everything was red.

Ingmar Bergman is a director with a visually and thematically consistent body of work aimed at exploring the nature of the human condition. (2) The majority of his films deal with the rather bleak subjects of suffering, loneliness, solitude, sterility, somberness and the anguish of the soul. However, in spite of such grim subject matter, and thanks to a close collaboration with acclaimed cinematographer Sven Nykvist, Bergman’s films capture dramatic, eye-catching images of immense beauty. Bergman’s Cries and Whispers is a quintessential entry in the director’s oeuvre. This is a visually stunning film deeply concerned with the emotional and physical pain of its protagonists. Even more, Cries and Whispers is a highly praised and much admired film, which could possibly be the most accomplished cinematographical work of Bergman’s multi-faceted career. (3)

Cries and Whispers takes place at an old English manor and revolves around four women, Agnes (Harriet Andersson), Maria (Liv Ullmann), Karin (Ingrid Thulin) and Anna (Kari Sylwan). Agnes, the owner of the manor, is a young, virginal woman terminally ill with womb cancer. Agnes’ sisters, Maria and Karin, are unhappily married and have traveled to the manor to help take care of their dying sister. Anna is Agnes’ faithful and reliable maid, who goes to great lengths to make her as comfortable as possible. The film depicts Agnes’ last two days of life in terrible agony, her death, and in a sense, even her resurrection and legacy. Cries and Whispers offers a glimpse into the lives of these characters, the terrible effects of the emotional and physical pain they are afflicted with and the different ways they cope with their suffering.

Undeniably, Cries and Whispers is a film about the world of women, and is very open in terms of the gender and sexual politics that it portrays. (4) Males, as represented by the doctor and the Chaplain, are completely useless in providing any comfort to Agnes. Also, Karin and Maria’s husbands utterly fail to understand the emotional needs of their wives. Women are not presented in a much better light. Except for Anna, all the women metaphorically epitomize monsters. Agnes’s terrifying disease, in a truly Cronenbergian fashion, is a biological horror clearly related to her sexual anatomy. Maria’s infidelities drive her husband to attempt suicide. And most shockingly, Karin performs an act of self-mutilation on her sexual organs to disturb and drive away her husband. On the other hand, Anna allegorically represents the maternal figure. But then again, Anna as a mother proves to be a disappointing failure as both children under her care, her biological daughter and Agnes, end up dead.

The character and personality of each of the four women portrayed in Cries and Whispers are uniquely delineated not only by their distinctive dresses and other garments, but also by the way they are seen through Bergman’s camera. Consider, for example, how close-ups often fragment Agnes’s body. This camera technique serves as a metaphor for the terrible sickness that is literally consuming Agnes’ body. Also, it is important to note that Cries and Whispers has a non-linear, fluid and associative narrative that is further enhanced by the use of vignettes, dream associations, and somnambulistic movements. (5) For each of the four characters, Bergman presents subjective flashbacks in order for the viewer to further understand the character’s feelings and motivations. These flashbacks have an oneiric quality, and at times it is impossible to determine if their content is a faithful depiction of reality, or mere illusion depicting the character’s intimate dreams and fantasies. However, part of Bergman’s brilliance is the way the film never questions the veracity of these episodes. In a sense, Bergman seems to be embracing the psychoanalytical posture that states that fantasies and dreams are just as important for the human psyche as real experiences are.

Although all the characters in Cries and Whispers have different and very well delineated personalities, they all share a profound agony. In a sense, Cries and Whispers is a film about pain, either emotional or physical. Agnes’ bodily pain is at the core of the narrative, and the scene showcasing her overwhelming suffering just before death is one of the most dramatic and terrifying depictions of pain in cinema history. Maria and Karin, on the other hand, undergo a frustrating life of repression and emotional horrors, as excruciating as the physical misery endured by Agnes. Consider, for example, the harrowing scene in Karin’s flashback, where she self-mutilates her sexual organs in order to avoid intimate intercourse with her much older and harsh husband. It is important to observe that Cries and Whispers offers a bleak and depressing portrayal of pain, as all the characters are unable to find any relief from the pain through either medicine or religion. This does not come as a complete surprise. After all, religion’s failure to comfort a tormented soul is a theme that dominates Bergman’s oeuvre.

Needless to say, Cries and Whispers carries a strong and multifaceted religious subtext. Organized religion, as personified by the unconfident Chaplain who administers last rites to Agnes, seems to be in a decadent state. The Chaplain’s unusual prayer is important to the film narrative not only because he confesses his own lack of faith, but also because it highlights a parallel between Agnes and Jesus Christ. As a matter of fact, the metaphorical portrayal of Agnes as a martyr is established early on in the film. Agnes’ death and agony are the catalysts that at least momentarily bring together the three alienated sisters, and allow them to open up emotionally towards each other. (6) The crucifixion motif is also present in Cries and Whispers with a high angle shot of Agnes’ dead body, and most dramatically, with the unmistakable evocation of Michelangelo’s Pieta in a scene where Anna holds the body. Frank Gado suggests that Anna “personifies both the womb and death as a merciful release from the pain of being” in this last, remarkably beautiful scene. (7)

Nevertheless, the most distinctive feature of Cries and Whispers is its striking color palette made almost exclusively from shades of red, black and white. These colors have a definite metaphorical connotation for Bergman and are used throughout the film to support the narrative. In Cries and Whispers, the colors, and the images that they form, seem to be more important than the dialogue, and the entire film gives the impression of portraying a cinematic space belonging to Lacan’s pre-symbolic, pre-linguistic realm. (8) The color red dominates almost every single scene that takes place inside the manor, and as the quote that opens this essay suggests, it represents the interior of the soul, and most probably, is also used as an allegory for the interior of the womb. (9) White is a color often linked to the virginal Agnes, and stands symbolically for sexual repression. Finally, black is a color that Bergman has consistently associated with priests and Christianity in his films. It is important to note that these colors mostly appear in two combinations, either red and white, or red and black, creating an arresting visual and thematic dichotomy. Therefore, Bergman seems to suggest how seemingly opposite forces affect the human condition, the nature of the soul on one side, and socio-cultural repressions on the other.

The unique visual dichotomy of Cries and Whispers can be considered as part of a much greater structure of oppositional forces that permeates the film. Consider for instance the title of the film – Cries and Whispers – which seems to be borrowed from a description of the Mozart’s 21st Piano Concerto given by Swedish music critic Yngve Flycht. Without doubt, this is a title that clearly conveys oppositions. Within the context of the narrative cries are related to emotional conditions such as pain, anguish, impotency, loneliness, guilt and suffocation. In contrast, whispers are associated with feelings of tenderness, tolerance, love and compassion. All the characters in Cries and Whispers appear to be trapped in a complex web of emotions, unsure if they want to cry or to whisper at any given time, as if they were being torn apart by their conflicting feelings. However, even with Agnes’ ultimate sacrifice, this film does not provide any closure or resolution to these antagonisms. Instead, Cries and Whispers is a beautiful film that invites the viewer to think about the nature of the human condition. For some viewers, the ambivalent end of the film places Agnes in a heavenly paradise, where she is absolved of her painful martyrdom. For others, it merely suggests the futility of her sacrifice. Nevertheless, as with many other works directed by Bergman, the film’s conclusion is not as important as the unforgettable process of self-discovery endured by characters and viewers alike.