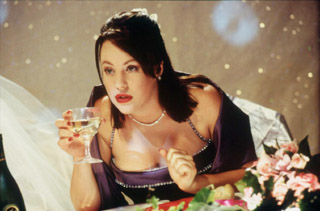 Now that he’s directed two feature films of his own, as well as contributing to the scripts of two directed by Emma-Kate Croghan (1), it should be possible to infer a few things about Stavros Kazantzidis (formerly known as Stavros Andonis Efthymiou) as an auteur. To start with, he’s a romantic: all four of these movies are about finding and hanging onto an ideal of true love. But he’s also a postmodern ironist who can’t quite believe in this ideal: his sketchy films take up and discard their ‘serious’ themes at will, leaving large blank spaces to be filled by faux-Nouvelle-Vague doodling and jokey pastiche.

Harvey (Hugo Weaving), the central character in Kazantzidis’ new film Russian Doll (2000), which he co-wrote with Allanah Zitserman, is a fortyish sadsack whose implausible job as a private detective is basically a dramatic metaphor for a passive, voyeuristic existence. While his best friends Ethan (David Wenham) and Miriam (Rebecca Frith) appear to be a happily married couple, Ethan’s private life is just as unsteady as Harvey’s: he’s in the throes of an affair with a Russian woman, Katia (Natalia Novikova), who arrived in Australia some months earlier. The plot is set in motion by a classic romantic comedy device: Ethan begs Harvey to enter into a marriage of convenience with Katia, who will otherwise have to return home when her visa expires.

Can you guess what happens next? If Harvey is a miserable old fart, Katia is a full-bodied cartoon of over-the-top femininity. From her first appearance decked out in fur coat, leopard-print dress, boofy hair and sunglasses, her specific identity as a Russian is less important than her status as a one-woman parade of vibrant folk culture and exotic sex-appeal – a persona so exaggerated it has a drag queen aspect (it’s not for nothing Russian Doll kicks off its retro kitsch music selections with a Carmen Miranda number). You know there’s going to be trouble as soon as this bombshell totters on her high heels into Harvey’s neatly kept, tastefully furnished Bondi apartment.

In multiplying these clashes between two stereotypical characters, Russian Doll understands the logic of romantic comedy better than the last Australian attempt at the genre, Better Than Sex (Jonathan Teplitsky, 2000). The format also sits well with the standard short-cut to ‘significance’ in the Kazantzidis/Croghan oeuvre, which is to have characters sit round and wryly discuss their relationships in terms of conflicting theories about fate, God, or the universe. Here, by linking these high-flown philosophies to concrete questions of identity – gender, ethnicity, religion – Kazantzidis brings them down to earth and provides Russian Doll with its most substantial themes.

Bill Mousoulis has described the work of Kazantzidis as “totally about displacement” (2). I think it’s about a few other things as well, but Kazanzidis’ films do seem to turn on themes of migration to (and within) Australia. There are a couple of neat reversals here. For example, the point is made that Katia, who’s been in Sydney a few months, is already fully integrated into the Russian expatriate community, while Harvey, ethnically unmarked and presumably a lifelong resident, is far more isolated. Indeed, apart from Ethan and Miriam he doesn’t seem to have any friends at all.

A more surprising twist on the theme of identity is the treatment of Ethan and Miriam, two ordinary middle-class Australians who are also orthodox religious Jews. The against-type casting of David Wenham may be meant as a joke in itself, but Wenham’s typically deadpan performance is effective in a sly, gradual way: alongside Weaving’s angst-ridden loser, Ethan comes across as a morally mediocre success story who’s bland and soothing enough to get away with anything. More generally, the film suggests that Ethan and Miriam’s slightly smug contentment derives from a lifestyle and set of values comfortably grounded in an established religious tradition (and social network). Still, this doesn’t mean that either Judaism or a morally relaxed worldview are under attack. Indeed, by presenting Katia as a life-force who will thaw out the repressed Harvey, the film ostensibly endorses her cheerful religious pragmatism – her belief that since God is merciful he will forgive, and hence (as she says) “if you’re going to do something wrong, at least enjoy it.”

However, Kazantzidis’ real interest is less in Katia’s vitality than in the niggling, maudlin depiction of soul-searching male loneliness by Hugo Weaving – a longtime associate of the director who was also a producer of the film. Despite some initial cross-cutting between the two leads, the narrative mainly unfolds from Harvey/Weaving’s perspective, and attention is focused throughout on this actor’s peculiar mannerisms. Before anything else, there’s that handsome carved-in-stone face, the sensitive petulance and preserved boyishness, the stammering and fidgeting that expresses an ongoing internal struggle – kneading his clasped hands, looking at the ground, scratching his ear.

This striking mixture of awkwardness and urbanity makes Weaving plausible as a would-be writer, but there are other ways of reading his performance too. If Katia sometimes suggests a drag queen, Harvey’s recoil as she smashes his china or sucks up tea through a Tim-Tam is not too far from old-style gay misogyny – a distaste for the gross physical reality of women, viewed as disrupting his fastidious routines. While this might help explain why the chemistry between Weaving and Novikova never gets off the ground, sadly the camp elements in this mild film are never cranked up to a point where they’re either openly avowed or entertaining as neurosis.

Still more than the acting, Kazantzidis’ mise en scène could best be described as eclectic. Like an eternal film student, he has a willingness to keep trying new things – which given the shoestring budget is probably also a necessary ingenuity in papering over gaps in the usable footage. These scattered tricks include jump cuts, scraps from videos shot by the characters, fast motion, and scenes of Harvey talking to camera as if to an offscreen psychologist (an especially hackneyed device). Without always being effective, a few of the visual choices suggest greater thought. Even in scenes where Harvey is absent, we’re reminded of a detective’s professional habit of distanced, fly-on-the-wall observation: one repeated set-up has two people talking in long shot, often framed by an open doorway, as the camera slowly zooms in or out.

Ultimately the film disperses its energy. There are too many distractions and useless bits of patterning: we keep seeing Harvey hammering away on his novel, but we never learn much about its content. There’s a sense that the ‘romantic comedy’ label is being used mainly as an excuse to shoot a film (and get it funded), meaning that Russian Doll often seems alienated from its own narrative mechanisms to no larger purpose. In particular, the perfunctory scenes that wrap up the story seem designed to draw attention to their own artifice (then again, reports indicate this accelerated finish was partly the result of running out of money).

One measure of what Russian Doll fails to achieve is the scene that gives the film its title. Upon her arrival at his flat, Katia presents Harvey with a set of wooden matrioshka dolls, one nestled inside another. “They’re like people,” she tells him. “Inside each layer is another story!”

The irony of this becomes clear when the always terrific Sacha Horler turns up for a couple of scenes as Katia’s voluptuous friend Liza, who takes an immediate shine to Harvey (“he’s got me purring like a pussy”). Initially Liza is even more of a cartoon than Katia, and Horler plays the man-eating vamp stereotype to the hilt. Later, however, there’s a brief, uncomfortable scene where Liza goes on a date with Harvey and he rejects her sexual advances. Kazantzidis cuts to a close-up of Horler, and it’s a jolt, as if a couple of layers of her make-up had been scrubbed off: we suddenly see the vulnerable woman – angry, sweaty, confused – beneath all the schtick. But despite Kazantzidis’ and Novikova’s best efforts, there’s no equivalent moment for Katia herself. Whether she’s reminiscing about her past in Russia or flinging herself on the couch in a crying jag, she remains essentially the original ditzy cartoon. She’s a doll, all right, but barely a human being – and so the film never manages to remove its outer shell and show us the ‘other story’ supposedly nestling beneath.