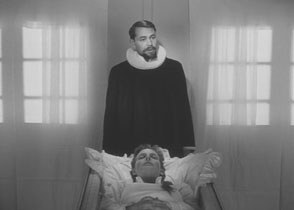 You better pay attention
Or this world we love so much might just kill you.

– Randy Newman, “It’s a Jungle Out There” (theme from the TV series Monk)

Between the features Two People (Två människor, 1945) and Ordet, Carl Theodor Dreyer made a series of state-commissioned shorts with an instructive (1) or informational purpose (an earlier short, Good Mothers [Mødrehjælpen], was released in 1942). These are rarely given the same critical weight as the features, and it may be the leap of a fanciful auteurist critic to see a connection between, say, Storstrømsbroen (1950), a dialogue-free travelogue about a bridge connecting the islands of Masnedø and Falster, and Ordet, where two families isolated by class and religion meet by passing over a symbolically loaded landscape.

If these shorts have a value – and some of them are masterpieces of the form – it is in the picture they offer of modern Denmark and contemporary concerns (modernisation, transport, welfare systems, health) not directly addressed in Dreyer’s usually period-set features. I would like to mention two I feel have some bearing on the feature that succeeded them, Ordet.

Thorvaldsen (1949) is a crib on a nationally-prized sculptor, but is also Dreyer’s most explicit statement on the role of the artist, and a key to reading his late films. Day of Wrath (Vredens Dag, 1943), Two People, Ordet and Gertrud (1964) are sometimes labelled “talkative”, “oppressive”, “slow”, “stilted”, or “theatrical” (2). But like Douglas Sirk, Robert Bresson and Jean-Pierre Melville at around the same time, Dreyer in his later work was instituting a new methodology of watching films, mentally preparing the viewer to see anew, see more.

In describing Thorvaldsen’s Venus with the Apple, he suggests the sculptor “expresses emotion through the rhythm and line of his figures… it is in the fine lines of the body which reveal her love, not her facial expression”. Dreyer displaces emotion in the late works away from its usual carrier in film – the face – which he had pushed to its limits of expression in the close-ups of La Passion de Jeanne d’Arc (1928), onto: the rhythms, gestures, movements and line-delivery of his actors; camera movement and sequence shots (3) as complex as a baroque fugue or Gothic architecture (4), and as simple; manipulations of sound and silence, movement and stasis, décor, space and planes of action, and especially, shade and light; and the mirroring effects, correspondences and ironies of the narrative structure. Combined, these reveal an emotional undercurrent so repressed that its release is enough to raise the dead. That the emotion derives from the intensely private Dreyer’s own feelings is suggested by his speculation that the profound sadness of Thorvaldsen’s Achilles with the Dying Amazon Penthesilea is “the sorrow experienced by the artist himself”.

Thorvaldsen’s statues also feature mother figures, both of them positive (the “tender” Caritas; and Night, an allegorical figure clasping her children Sleep and Death). Dreyer’s female characters are ambiguous presences – and absences – in his work. Most of them undergo great emotional, spiritual and/or physical suffering, usually at the hands of patriarchal representatives: husbands, clerics, scholars, judges. In Day of Wrath, one old woman is tortured by a gang of prurient pastors; Joan of Arc is threatened with torture, and humiliated by her jailors in a manner still familiar today; and both are burned alive. But this very suffering is a spectacle that the viewer is obliged to watch, and dwell on; s/he is placed in the same situation as the torturers. There is probably a moral intention behind such viewer positioning, but it is significant that, while her pregnancy has an anxious onscreen audience, Inger (Birgitte Federspiel)’s dying occurs mostly off-screen in Ordet, and by “natural” causes. Perhaps Dreyer intuited that he had shown too much in Day of Wrath; the next female to die in his films was in The Fight Against Cancer (Kampen mod Kraeft, 1947), treated in an almost comic echo of the early cinema skit Mary Jane’s Mishap (George Albert Smith, 1903).

It could be argued that Ordet is a reversal of the “usual” Dreyer scenario: here the woman’s suffering spiritually redeems the patriarchies that surround her; the “seduction scene” that traps so many women in Dreyer’s work (the most famous is Nicolas Loyseleur’s attempt to extract a confession from Joan in La Passion de Jeanne d’Arc [1928]), is made positive and cross-gendered, as Inger tries to persuade an unyielding Morten (Henrik Malberg) to marry his son Anders (Cay Kristiansen) into a theologically unsuitable family. The ignored prophet is in Ordet capable of raising the dead and restoring social harmony, whereas Joan’s death unleashes a social cataclysm.

The second short that serves as a sketch for, or synopsis of, the method of Ordet is They Caught the Ferry (De Nåede Færgen, 1948). Its un-Ordet-like motorbike action, full location shooting and fast cutting might make this a preposterous statement, but it is the film’s unified treatment of the natural and the supernatural I want to focus on. From the opening scene of this short, the “real” – actual footage of the Danish sea- and landscape, modern transportation, a couple representative of contemporary youth – co-exist with the allegorical and supernatural, in the shape of a jalopy decorated with the frame of a skeleton. The car weaves in and out of the very tangible countryside until the climax, when the driver is revealed to be Death, and causes the speeding pair to crash into a tree. The final sequence affirms this co-existence of the material and supernatural: a bell ringing for the present-day ferry is also a funeral bell tolling for the couple’s coffins, being ferried by a Danish Charon to the underworld.

This co-existence of two ontological realms continues in Ordet, with the shadow cast by car headlights on a wall doubling as the departing of a soul; and the final famous resurrection embedded within museum-meticulous interiors. Neither realm undermines the other; for example, the miracle isn’t announced as a special intervention by flashing lights or choral music. Dreyer is one of the few directors for whom Tzvetan Todorov’s definition of the “fantastic” applies; in films like The Parson’s Widow (Prästänkan, 1920), Vampyr (1932), Day of Wrath and Ordet, there is a “hesitation between natural and supernatural explanations of apparently supernatural events [that is] sustained to the end” (5).

In fact, as in all of Dreyer’s work, this resurrection, this ultimate spiritual manifestation, privileges the physical, the erotic. For example, Inger gnaws on the cheek of a husband she continues to regard as a lover – after all, this is the resurrection of a body (6). Although Dreyer may have been “a deeply religious man” and “a good Christian” (7), and in spite of his characters’ rhetoric, the resurrection in Ordet need not be read as religious. The story of a woman who is put into a death-like sleep at midnight, suspending time, as well as the intervention of a wandering saviour, belong as much to fairy-tales (e.g. Snow White or Sleeping Beauty) and folklore as Christian narrative. To find out, however, what it might be like for a dead woman to rejoin the real world, we have to wait for the harrowing sixth season of Buffy the Vampire Slayer (Joss Whedon et al, 2001-2002).

Both Vampyr and, in a sense, The President (Præsidenten, 1919) feature resurrections of dead women, but the real companion piece to Ordet is the comedy The Master of the House (Du Skal aere din Hust, 1925) – its contemporary setting rare in Dreyer’s work. In both, a housewife has too many demands made on her in the film’s first half, and disappears from most of its second, until she “rises” again. Both are ultimately about marriage; in Ordet, Anders has to choose between two types of marriage, both given due weight in the film: the hierarchical, loveless arrangement of convenience of the older characters, and the relatively equal, love match of Inger and Mikkel (Emil Hass Christensen). And in both, the re-animation of a stopped clock indicates the moral and spiritual regeneration of morally and spiritually inert men.