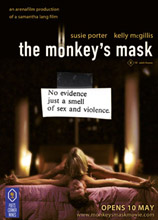 Samantha Lang’s new film The Monkey’s Mask (2001) opens with an extreme close up on the freckled face of investigator Jill Fitzpatrick (Susie Porter). The position of the camera cuts her in half – we see only part of her face, her countenance bisected by the edge of the frame, and what fills the remainder of the screen is a cold, expansive emptiness. This strategy of segmenting the face of our protagonist recurs throughout The Monkey’s Mask as we progress through the ‘chapters’ of the tale, the story taken from Dorothy Porter’s verse novel of the same name. The vast emptiness of the frame, contrasted with the almost microscopic intimacy of the disconnected freckled visage of Jill inadvertently exemplifies the problems that plague the film itself. Like this recurrent motif, there is the desire for great intensity in this film, a need for a direct, piercing gaze directed at the characters and their motivations and secrets. Yet in the end, they really only exist in halves, in attitudes that make them seem alien and removed from their surroundings and the situations which envelop them. Unfortunately, once you look beyond these incomplete characters, all that is left is a wide yawning expanse of nothingness that never seems to be filled, no matter how Lang tries to fill the space with movement and colour. The Monkey’s Mask suffers from the same plague which struck Lang’s earlier work, The Well (1997). Apart from some clear similarities in theme and character, the two films also share the same desperate coldness, the flat characterisation, the persistent numbness in emotion, the same self-conscious style. Nor does The Monkey’s Mask succeed in conjuring up the noir-inspired grittiness that it seems to be aiming for; good noir has bite, but The Monkey’s Mask just appears all gums, mouthing the phrases, producing the sounds, but never capturing the essence of what it strives so hard to achieve.

Tackling a source such as Porter’s verse novel was never going to be an easy task. It is curious that in literature, Australia is currently producing an impressive repertoire of detective fiction: writers like Peter Corris, Chris Nist and Marele Day have achieved some success with the form, staying within generic boundaries and exploring their confines with some success. Yet the crossover from literature to film has stumbled and stalled, with the visual embodiment of this genre somehow sitting uneasily with us; The Empty Beach (Chris Thomson, 1985) being one of the few attempts at exploring the knowing, fatalistic world of the detective film. In The Monkey’s Mask Lang takes another crack at it, and it comes complete with all the generic traits we have come to expect: a voiceover tainted in retrospect by bitter experience, a doomed attraction between the investigator and a potential suspect, and an innocent victim who proves to be not all that she seems. Adherence to such conventions within this genre is not necessarily such a problem – in fact, it’s frequently quite welcome – but Lang’s slavish and uninspired adherence to them is. Rather than being a reanalysis of convention, or respectful homage, or an attempt to reinvigorate something old into something if not exactly new, at least divergent or challenging, The Monkey’s Mask just blindly trots everything out as expected. Under such direction, convention becomes cliché, the narrative becomes a mere cakewalk and invention gets lost somewhere in Lang’s desire to replicate classic signposts and markers of the genre. Part of the problem lies in the adaptation by screenwriter Anne Kennedy (who also co-wrote 1992’s Crush with director Alison Maclean). Lifting lines directly from the original source, the voiceover carries the self-conscious weight of verse, a rhythmic, yet overblown expressiveness that seems less a reflection of Jill as she traverses the well-trod terrain of investigation, and more like an abbreviation of the senses which loses resonance through its brevity. It simply never truly gains anything through the precision and exactitude of language to which such poetic forms aspire. Lang never quite succeeds in translating this desire for compactness in poetry into the more expansive world of the cinema, and the persistent sense of incompleteness – in pretty much all elements of the film – leave The Monkey’s Mask as coolly distant as the disembodied observations of Jill Fitzpatrick which shape each ‘chapter’.

Set in contemporary Sydney, Jill Fitzpatrick is called upon to investigate the disappearance of Mickey Norris (Abbie Cornish), a young poet whose life comprises a mixture of university studies and bad poetry readings in dingy pubs. Jill’s progress through the various clues and suspects lead her to the statuesque Diana (Kelly McGillis), a university lecturer of the missing girl. Diana, like her mythological namesake, is a hunter, someone who seems intent on trapping and enjoying those who take her fancy, and it’s not long before Diana and Jill are rolling and cavorting around in any available space in fits of Sapphic ecstasy. Such sexual frankness is familiar territory for Porter, who lately on screen never seems to remain this side of vertical for too long, but much of the intimacy in The Monkey’s Mask seems a bit too reminiscent of the ill-fated fusion of voice-over and image that destroyed Jonathan Teplitsky’s recent Better Than Sex (2000). Like Teplitsky’s film, The Monkey’s Mask seeks frankness through ill-conceived images and fairly inane sex talk, all of which just renders these sequences sexless and without passion. You get the feeling that Diana could just consume Jill whole if she so desired, she seems so predatory, but Jill’s gee-whiz commentary during these exchanges manages to kill all the potential in the possibility that such a startling turn of events could indeed be on the cards.

The perfunctory progress through the case is made all the more irritating by the director’s apparent lack of interest in the very people posed to the audience as potential suspects. In fact, the screen time of pretty much everyone except for McGillis and Porter is so negligible that they hardly seem to register. In between bouts of grunting and wincing with Diana, Jill Fitzpatrick manages to cram in none-too-meaningful exchanges with a range of characters whose presence is rendered largely irrelevant. Deborah Mailman’s character Lou manages a scene of tai-chi and an awkward kiss in a bookstore before she’s sent packing, Caroline Gillmer drops a few terse words about Mickey Norris before she vanishes and Jill’s alcoholic father (Chris Haywood), who seems to be about to play an important role in his daughter’s investigation just walks pointlessly across screen, takes a drink, and then he too simply disappears from the film. These sequences involve people we are asked by convention to integrate into the wider picture, and we must evaluate them as potential lynchpins in the death of Mickey Norris. Yet these secondary characters are universally dealt with in such a flip manner that they almost don’t exist in the scheme of things at all. This really is where the detective film must make its mark, in the parade of suspects, and the intriguing process of weaving together the various strands posed by the secondary characters to cement the fabric of the case. In other films of this ilk – like some of the Sam Spade films, for example, the cast of supporting players (Peter Lorre, Sydney Greenstreet) were vital in developing not just exposition, but the tone of the film, the world for the central characters to explore and inhabit. But in The Monkey’s Mask all they get is a quick burst of dialogue, maybe even a morsel of information if they’re really lucky, adding little to the tension or the intrigue. The Monkey’s Mask is like the great black hole of supporting characters, where one by one they vanish into the vortex before any of them actually get the opportunity to do anything or make any kind of contribution to the tableaux Lang lays before us.

Lang’s control of these elements which make a decent detective thriller lapse consistently throughout The Monkey’s Mask. The revelations when they come aren’t revelations at all. It takes Jill most of the film before she decides to watch a vital piece of video evidence all the way to the end – she just does it in instalments, apparently, to keep herself on her toes. The denouement, when it finally comes, just sort of plops into your lap like an ill-balanced bowl of porridge; it’s unpleasant, heavy handed, and occurs out of nowhere, without any warning or sense of momentum. Lang’s style insistently keeps us at arms length – even when Jill and Diana say something interesting, which isn’t that often, we only get to view them from behind other objects, bits of coloured glass, walls and windows. The camera just pans and pans across, and although the bright reds and oranges are all very attractive, they sure don’t put us in a position where we can connect with the conversation going on in the background. The self-consciousness of the script and the direction leave The Monkey’s Mask a hollow exercise, a more significantly isolated and cold effort than Lang’s The Well, which at least offered a little unspoken intrigue in the central relationship. But what you do eventually discover about The Monkey’s Mask only truly becomes apparent some time after you have seen it. During the screening you wade through the events, switching between irritation to boredom, wondering what it all means. But after it’s over, when distance becomes the ultimate and most accurate test, you soon discover what lies behind The Monkey’s Mask is actually, incredibly, nothing at all.