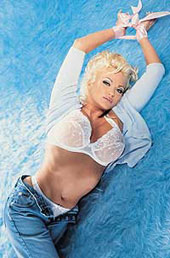 Stacy Baker was a plain housewife with no skills or aspirations of her own, married to an oppressive husband whose fantasy was to see pictures of her naked in magazines in order to impress his mates. Encouraged by his fantasy, Stacy posed for some amateur adult magazines, winning awards and becoming the pin-up girl for Hustler and others. Soon she accepted offers to perform in X-rated films, which changed her life forever.

Sex liberates rather than subjugates, as Stacy appears in control during every minute on the screen. It appears in this manner at the beginning when she leaves her husband and sleepy Oklahoma to follow her dream and succeed in LA. Along the way there are some heavy costs to be paid which are so blatantly on view for the audience.

Behind all the cameras, we are drawn into the candid, fresh and intimate moments of both Stacys: Stacy Baker the blonde next door, stripped off, without make up and glamour, who doesn’t trust anyone except her cat: “I don’t get lonely at all. When I want sex, I go to work and when I want affection, I have my cat.” It doesn’t seem like she needs much to make her happy. However wise, cold and down to earth Ms Baker appears, her insecurities push her to become Stacy Valentine, the glamorous, ambitious, porn queen constantly on the trail to improve her body and stay in shape by not eating and plastic surgery. What men want her to be and how they perceive her on the screen is her main preoccupation. She is desperate to be their fantasy and look real during her steamy sex acts, while murmuring out loud fake orgasms and cleaning the ants off the set.

Fugate’s camera does not hold back at any moment and it even follows Stacy inside the plastic surgery clinic where we see her have her breasts augmented, her thighs and flanks liposuctioned and her lips injected with fat taken from her hips. We watch her heal and become the blown-up sex doll she dreams of becoming.

Stacy wants us to see her tribulations as they come and go and the documentary achieves this through the tight and daring relationship between her and the documentary director, Fugate. This girl is not hiding anything from the world, no feelings, no flesh; she even performs live sex shows on the Internet for the world to enjoy her on every medium. We are drawn into her life with such ease that every emotion she experiences affects us. We want her to complete her dream and when she doesn’t, we feel her pain and disappointment as if it was our own.

The Girl Next Door follows Stacy’s quick transformation and rise to fame with all its magic and hurdles along the way. We see her hard at work taking her films very seriously and promoting their value at sex fairs where she teases guys with her enormous breasts but won’t let them touch the merchandise. Her boobs, personality and saucy films attract even housewives, joining their husbands to pose for photos while panting and dreaming of having her “assets”. Fugate’s camera shows us everything about Stacy, her insecurities, failures, delusions and the horrific surgery scenes. They are tragic enough to make anyone keep their natural assets and not let some doctor strip them down in such a barbaric manner. Without many words and sorrows, but rather candid and organic, The Girl Next Door draws us into this woman’s life and elicits from us the unconditional love she deserves. Fugate doesn’t want to shock but rather to open our eyes to the courage and determination Stacy carries in becoming every man’s fantasy, as well as her own. Although unskilled in many other areas, Stacy is a realist and doesn’t want to remain Stacy Valentine for the rest of her life. Giving herself in this industry two years, by working hard and making as many films as it is physically possible for her, she earns respect and financial security, adoring fans, while looking for love amidst it all. Julian gives her his heart but cannot cope with her porn persona and her ambitions. We witness their break up, and feel their pain and tense moments. The audience wants them to get back together and for Stacy to find her real love.

Fugate does a great job in engaging the audience’s emotions in this reality soap opera. Stacy’s experience as a porn star empowers her sense of reality as she is aware that money buys her independence but not happiness. When she finally achieves her goal and receives recognition as “Best American Starlet” in Cannes, she is quickly snapped up by VCA, a powerhouse adult films studio, to an exclusive deal. This prestigious title of “contract girl” is given to no more than five women out of hundreds of aspiring actresses. Her new crown makes it all worth it and leaves us with a sense of pride despite the slim reputation her industry injects in us.

The frankness and intimacy displayed by the camera made this documentary about Stacy’s story so compelling and worth watching. Seeing this character with large boobs, plastic lips and bimbo looks split into two people each with their own substance gave this film its charm. I laughed at absurd situations and felt emotions when needed. For eighty minutes, I became involved in some bimbo’s life yet did not get bored with the trivial moments of her existence. My limited prejudices about blondes with no layers beyond looks and make-up were broken and my respect for Stacy raced through me from the bottom of my belly to the top of my heart. Like all intense, daring and hide nothing behind the camera or taboos documentaries, The Girl Next Door affected me in this manner.