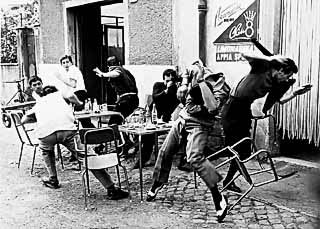 Despite having entertained secret hopes of studying at the Centro sperimentale di cinematografia as an adolescent, Pasolini only came to the cinema relatively late in his career. By the time he came to direct Accattone as his first film in 1960, with an aspiring young poet by the name of Bernardo Bertolucci as his assistant, Pasolini had already established himself as one of the leading poets, novelists and intellectuals of his generation. And in some ways Accattone and all of Pasolini’s subsequent involvement with the cinema – he would produce another 15 films in as many years before being brutally murdered in 1975 – was to a large extent predicated on the literary and intellectual position that he had already managed to occupy by this point. In the wake of the furore created by his first novel, Ragazzzi di vita (1955), which was set in the Roman borgate or shanty towns and which portrayed the harsh conditions of precarious lives eked out at the margins of the then accelerating Italian “economic miracle”, Pasolini had come to be keenly sought after by established directors to work as scriptwriter on a number of films depicting the seedier side of life in the Italian capital. As a result, Pasolini had collaborated on more than a dozen films, among them several of Mauro Bolognini’s early works and, most notably, Fellini’s La dolce vita (1960), before deciding to take on the director’s role himself with Accattone.

Ironically, it was Fellini who first offered to sponsor Pasolini’s directorial debut via his newly-formed production company, Federiz, but Fellini ended up being singularly unimpressed by the first two sequences that Pasolini had filmed and promptly withdrew his support. Eventually, through the favourable intervention of Mauro Bolognini, the project was picked up by Alfredo Bini who would then produce all of Pasolini’s films up to and including Edipo Re (Oedipus Rex, 1967).

Although filmed from original screenplays, both Accattone and Mamma Roma, which followed close behind in 1962, were cinematic renditions of the world of the borgate which Pasolini had presented in his earlier novels, Ragazzi di vita and Una vita violenta (A Violent Life, 1959). Having lived close to one of the borgate when he first arrived in Rome in the early 1950s, Pasolini had become fascinated with a world which he saw as pre-industrial and almost primordial, a world still enveloped in an epic-mythical dimension, a world marginalised and left behind by history and progress but thus one of the few environments still resistant to the blandishments of the neo-capitalist consumer culture which Pasolini sensed was rapidly bringing about a complete “anthropological transformation” of Italy through a destruction of its traditional peasant-based culture. Accattone is thus, first and foremost, a celebration of this world which, for all its material poverty and its atavistic violence, its misery and apparent amorality – or perhaps precisely because of them – is nevertheless one of the few remaining sites of resistance to the spread of secular bourgeois morality and its concomitant religion of affluence and consumerism.

When the film was first shown at the Venice Film Festival in 1961, it fiercely divided the critics and in a bizarre move, comprehensible only with reference to the prevailing atmosphere of moral panic in Italy during those conservative years, the government censors would only release the film with the equivalent of an “R” rating.

For their part, many of the film’s supporters thought they could detect a reprise of neo-realism’s ethical and social commitment in the film’s story and setting. And yet, seen today, it’s clear that in spite of superficial similarities with classic neo-realism – lower-class subjects, external “real” locations, the use of non-professional actors, a gritty documentaristic “feel” – the film is lyrical and expressionistic rather than neo-realistic and, moreover, is an already-mature statement of what Pasolini would later theorise as his “cinema of poetry”. For, in fact, while the film may implicitly acknowledge the historical heritage of neo-realism, it clearly shares none of its ethos or its social concerns. As Pasolini’s biographer, Enzo Siciliano, notes: “Accattone is not a film of political protest. Rather it is religious and existential. […] Accattone gazing at the Tiber, and the angel behind him like a kind of divine minister, evoke a sacred mystery and offer a meditation on the ever unrequited risk of life” (1). For indeed, unlike so many other young iconoclastic directors at this time, Pasolini is not intent on de-mythifying and de-sacralising but rather on “re-sacralising” human existence even if this means a re-evocation of the primordial links between violence and the sacred, the dark root of all sacrificial religions as well as the basis of the Greek idea of tragedy.

Pasolini’s strategy in this attempt at re-sacralisation, first employed here but thereafter becoming a hallmark of his style, is the practice of a violent contamination of registers, of high and low, of Christian and pagan, of love and hate, of sacred and profane. Witness, for example, the plaintive and noble strains of Bach’s Saint Matthew’s Passion which swell as the prostitute, Maddalena, is savagely beaten by the gang of Neapolitan toughs; or again the same deeply pious music as Vittorio-Accattone and his brother-in-law attack each other with such mutual hatred that they become interlocked in the coils of a mortal embrace, unable to be separated, writhing together in the dust like a pair of savage copulating snakes. Accattone himself, a low-life scrounger and pimp clearly marked for death from the very beginning of the film, is repeatedly presented, as Peter Bondanella has pointed out, as a sort of inverted Christ-figure, an identification explicitly confirmed when he gives up the spirit between two thieves, both of whom, significantly, make an inverted sign of the Cross over his body (2).

The complexity of the moral vision that is engendered in these wilful juxtapositions, reaching far beyond the relative simplicity of the left-wing humanist ethics that underpinned classic neo-realism, is matched in the film by an apparently austere but, in effect, remarkably-layered, and almost-mannerist, visual style. Despite superficial appearances to the contrary, all of Pasolini’s shots in the film are carefully composed and meticulously edited. As, again, Bondanella notes:

He [Pasolini] treats the individual shot as an autonomous unit, the cinematic equivalent of the poetic image, rather than as an integral aspect of a larger narrative design. This autonomy of the individual image is so pronounced in Accattone that some critics first assumed it arose from his technical incompetence in a new artistic medium. (3)

Although Pasolini himself would later often joke about his relative lack of technical knowledge at the time he made Accattone, it’s nevertheless not an ignorance of the possibilities of the camera but rather a different model of visual representation which determines the film’s singular iconographic visual style. For even if Pasolini himself would often talk about Dreyer, Mizoguchi and Chaplin as strong cinematic influences, the real influence on the visual style of Accattone is undoubtedly the memory of the masters of Italian Quattrocento painting whose works Pasolini had studied in his university days at Bologna under the eminent art historian, Roberto Longhi. This pictorial influence is evident in the insistent “frontal” positioning of the subjects and perhaps most notable in sequences like the line-up of the young toughs at police-headquarters when the camera moves slowly in medium close-up contemplating face after face like an eye moving across the Masaccio fresco “sequences” in the Brancacci Chapel. Several times during the film when Accattone is lying on his back exhausted, and in particular when we see him in bed dreaming of his own funeral, he is meticulously framed so as to bring to mind Mantegna’s moving painting of The Dead Christ. And yet this is no mere indulgence in aesthetic pictorialism for surely what is at work here, visually, is again Pasolini’s technique of contamination, a strategy that here succeeds in “re-sacralising” human existence by imagistically associating even the impending and senseless death of a low-life scrounger like Vittorio-Accattone with the willed and epochal sacrifice of Christ.

Thus, in spite of the spiritual myopia which led the government censors at the time to judge the film as sacrilegious, Accattone is, in fact, a profoundly religious and highly moral film. And confounding those who wanted to read it as a reprise of neo-realism and as gesture of political protest, the film is a lyrical and expressive paean to life at the margins rather than a plea for more material well-being and integration into mass culture.

So perhaps, with the benefit of hindsight, it was a boon that Pasolini should have come so late to filmmaking for, in spite of its apparent “primitivism” and, one might say its “poverty” – but here one thinks of Grotowski’s richly-poetic “poor theatre” – Accattone is a work of remarkable artistic and intellectual maturity. For indeed there can be few other directorial debuts in the history of cinema that have yielded such a powerful, moving and stridently-poetic work as this apparently-loose series of vignettes presenting moments in the life and death of a poor loser who renounced his “proper” name of Vittorio in order to glory in his nickname of “Scrounger”.