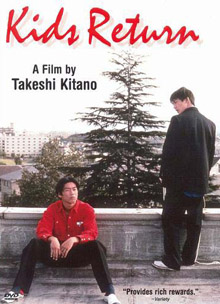 Takeshi Kitano’s sixth film, Kids Return, is a cinematic tale about Shinji (Masanobu Ando) and Masaru (Ken Kaneko), two high-school dropouts, growing up in a Tokyo suburb. Shinji and Masaru are playful, self-centred and irresponsible. They wag school, ridicule their teachers and bully other students, and spend most of their time at the local coffee house and noodle shop. Shinji pursues an amateur boxing career, but does not have the strength or determination to succeed amidst the cutthroat competition. Masaru joins a yakuza gang, quickly rising in the ranks of the local mob, but due to his lack of discipline, he too soon loses his position. Three years later, Shinji and Masaru meet again and return to their old school.

Kids Return follows the success of Violent Cop (1989), Boiling Point (1990) and Sonatine (1993), and continues to explore the themes across most of Kitano’s films: male friendship and moral dilemmas. A bleak picture of growing up in Japanese suburbia, Kids Return focuses on the life of two outsiders, those who reject the mediocre norms that rule the Japanese society and deliberately choose the path of ‘losers.’ Situated in the school grounds, the local coffee house, noodle shop and boxing gym, the film maps the tough Tokyo neighbourhood in grim colours. Shinji and Masaru are growing up bereft of teenage idealism, a sense of belonging or direction. Kitano continually emphasises that his heroes are striving to be excellent, but the society has left them with few appealing options. Their high school offers limited chances for ‘success’ and those who do not make the best of their scarce possibilities are branded ‘idiots.’ The teachers observe their pranks with a sense of indifference, shrugging their shoulders and leaving them unpunished, while the two boys wonder around local shops, cheap restaurants and cinemas, looking for excitement and a sense of purpose. Shinji’s and Masaru’s friendship seems to be the only lasting legacy of their teenage years. When they finally decide to part, the only regret about moving on is that they lose each other’s company.

Kitano’s compassionate view of the two high school dropouts evokes numerous correspondences with the works of Vigo, Melville (whose films profoundly affected Kitano’s gangster milieu) and Truffaut. However, his serio-comic style simultaneously reveals a ferocious critique of the profoundly Japanese stereotypes of success: “I wanted to show how mediocrity will always succeed in Japanese society. If you don’t go against the rules, if you go with the flow, you will achieve a certain level of success, an easy living.” (1) Defying social stereotypes, Kitano’s heroes ironically become entrenched in equally constricting codes of behaviour, ruling the boxing arena and the criminal underworld. Shinji is shown how to elbow and head-butt the opponents in the ring and decides to ignore his coaches’ demands for a healthy life style. Masaru quickly learns about the shallowness and cowardice of the wise guys. When he finally decides to speak up against his bosses, he receives a severe beating and is promptly expelled from the gang.

However, not everything seems bleak in Kitano’s film. The director combines the scenes from his characters’ lives with the stand-up routine of a pair of their fellow students, hoping to make it big in the future. The narrative follows their gradual progression in the world of show business, as their audiences grow bigger and the reactions to their jokes become louder. Jovial and rebellious, Shinji and Masaru are also seen as destined for new opportunities in life, yet Kitano implies that their path is definitely more uncertain. Riding through the old school yard, at the end of the film, Shinji asks Masaru whether he thinks they are finished. Masaru responds: “Stupid. We haven’t started yet.”

Taking on the roles of director, scriptwriter and editor, with style and precision, Kitano again exercises total control of his film. His poetic storytelling, economic dialogue, rich cinematic material and meticulously detailed editing, demonstrate a highly idiosyncratic narrative style. Kitano interweaves different narrative levels combining flash backs with snippets of the past and present and placing high demands on the audience. Structured as a reminiscence of high-school days, Kids Return demands almost theatrical detachment from the performers in the leading roles. Ando and Kaneko perform their roles with a strong sense of restraint. This is best seen in the dialogues between the two protagonists. Framed in long, static shots in which, similar to other Kitano’s films, his protagonists do not pronounce their lines to but at each other. Ando and Kaneko make most of their puzzling and captivating conversations, using pauses to accentuate a strong sense of withdrawal and enhance the dramatic moments in the story.

Katsumi Yanagishima’s photography captures the claustrophobia, monotony and drabness of Japanese suburbia with a meticulous sense of detail. The cold apartment blocks, school grounds, classrooms and small neighbourhood shops convey a sense of urban melancholy in the environment where conformity is everything. Joe Hisaishi’s expressive, dream-like musical phrases, on the other hand, place emphasis on the unvoiced emotions of Kitano’s characters, their poignant reminiscences of the end of childhood and their sudden and intense emergence in the world of adults. Kids Return once again demonstrates Kitano’s uncompromising ethical stance, one that gained him international recognition. It simultaneously follows the exploration of major themes in his work that will powerfully resonate in his most recent films, Hana-Bi (1997) and Kikujiro (1999), manifesting the sheer depth of his talent and his meticulous control of the filmmaking process.