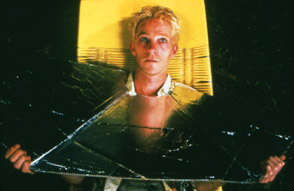 One way of investigating contemporary Australian cinema’s interest in ‘alternative’ lifestyles might be through a kind of phenomenology of the share house. Of course, living with your friends hardly makes you a bohemian rebel – but with its potential to generate open-ended encounters between very different social types, the share house can be an extremely powerful engine for drama (just ask the producers of “Big Brother”). As a narrative site, it’s also interesting because it can be understood in several ways. On the one hand, modern share housing descends partly from the collective, communal ideals of the ’70s. But then there’s the flip side of the countercultural dream: the individualistic fantasy of escaping from all permanent ties, drifting footloose and fancy-free from one address to another. Of course, it’s arguable that actual share houses are nothing like either ideal, and are more likely to be swamps of poverty, bickering, and squalor. Yet in the imagination, even the misery of quotidian existence can somehow take on a perverse glamour (or ‘anti-glamour’), especially when linked to apocalyptic extremes of madness and death.

Audio-visual media like film and TV seem especially well equipped to explore these competing notions of share housing, and relate them to concrete experiences of life in a particular place. In Australian cinema, Richard Lowenstein’s Dogs In Space (1986) is a notable example of a film grounded more by its share house location than its fragmentary narrative and barely developed characters. For most of its running time, Dogs In Space remains inside this (actual) house in suburban Melbourne, depicting a series of anarchic parties in congested yet mobile widescreen compositions. The camera weaves its way through a motley crew of punk and ‘new wave’ types as they carouse, brawl, and struggle to assert themselves over the noise and chaos. There’s not much holding it all together, yet by allowing the characters to mingle freely in a circumscribed space, Lowenstein invites us to see their milieu (and by extension, the film) as a single cosmos, a system that retains some coherence even as it falls apart.

Lowenstein has had a career in the film industry for around twenty years, but like nearly all directors in this country, he’s been able to make only very few features. Recently he’s returned with another film about share house life: the comedy He Died With A Felafel In His Hand (2001) adapted from John Birmingham’s 1994 non-fiction bestseller. Faced with the task of shaping Birmingham’s rambling collection of anecdotes into a screenplay, Lowenstein’s solution was to invent a new central character: Danny (Noah Taylor), a posturing would-be writer in his late twenties. Over the course of the film, we follow Danny from Brisbane to Melbourne to Sydney as he flees from loopy housemates, traumatic love affairs, and rent collectors.

As in Dogs In Space, the backdrop for this film is almost exclusively domestic. Everything happens in and around the three houses Danny successively inhabits, which serve as economical ways of evoking their respective, otherwise invisible cities. In Brisbane, Danny’s home is a sunbaked ‘Queenslander’; in Melbourne, a suburban terrace with political posters tacked to the distressed walls; in Sydney, a trendy white-on-white apartment with harbor views. The bulk of the film’s humour derives from the picturesque quirks of Danny’s housemates, who range from a shrill bimbo played by Sophie Lee to a couch potato nicknamed Jabba the Hutt (an affectionately rendered type not unlike the comic-book retailer on “The Simpsons”).

While much of this incidental material is directly from the book, two key ongoing plot threads are entirely Lowenstein’s. Firstly, there are Danny’s vacillating relationships with the two women in his life: his down-to-earth best friend Sam (Emily Hamilton) and the enigmatic, bisexual Anya (Romaine Bohringer). Secondly, we follow Danny’s quest to succeed as a writer and thus (presumably) escape from the purgatory of share house existence.

So in a sense Felafel is two films in one, as if Lowenstein were trying both to cater for Birmingham’s fans and to tell a less broadly comic story of his own. As he struggles to reconcile these incompatible tasks, he isn’t helped by his infuriatingly feeble hero. Surrounded by crazy antics, Danny is meant to be the eye of the storm, but he’s more like a floppy zombie who drains life from every scene. Australian cinema has long been overburdened with indulgent portraits of daggy but lovable youths, and Taylor’s mannered acting – the stiff passivity, the halting childish voice – conveys a self-pity that quickly becomes unbearable.

In constant retreat from whatever’s happening around him, Danny does little to explore his surroundings or advance the narrative, in line with the idea current among many male filmmakers that it’s progressive to show men as dithering jerks and women as empowered babes who love them anyway. It’s hard to believe that someone who had really lived in forty-seven share houses (Taylor certainly looks ravaged enough to suggest he’s seen just about everything) would be this gormless. It’s still harder to believe that Danny would have much romantic success with either Sam or Anya without exercising a certain persistence and rat-like cunning – rather than just hanging around waiting for them to put him out of his misery.

In this and other ways, Felafel feels oddly conservative and melancholy for a supposed youth comedy, particularly compared with the brash gross-out humour of Birmingham’s book. But then, Lowenstein is hardly trying to seem cutting-edge, or even to recreate a specific subcultural milieu (as he was in Dogs In Space). The joke about Danny is that the bohemianism he aspires to is at least forty years out of date. Wishing he were Jean-Pierre Leaud, he smokes French cigarettes and tries to produce stream-of-consciousness prose on an Underwood typewriter. Again, none of this relates much to Birmingham, a cheerfully swaggering writer who likes to appear as a hardnosed journalist with no time for arty wank.

Though Danny’s pretensions are ludicrous, it’s not always clear whether Lowenstein is mocking the character or sympathising with his plight. These are tough times for aspiring writers: you may be Hemingway in your own mind, but objectively you’re just one more freak in the freak show, no more or less authentic than the guy who uses cane toads as golf balls or the political militant who wets his pants when the police arrive. Transcendence seems impossible, or as Anya the postmodern intellectual says: ‘Nothing is new any more. Everything is rehashed.’ An implausible blend of super-sophisticated vamp and PC feminist, Anya is viewed by the film with a mix of distrust and awe, as if Lowenstein suspects that what she represents will sooner or later triumph over the existential moonings of Danny and his kind.

Indeed, if the subtext here is the struggle between Danny’s literary angst and Anya’s chic post-humanism, Anya wins hands down. Just about all the characters in Felafel (major and minor) are limited comic stereotypes who barely expand or evolve, while the romantic triangle between Danny, Sam and Anya is more a plot device than a believable psychological situation. The most genuinely heartfelt relationship on display is the homosocial bond between Danny and Flip (Brett Stewart) a dimwitted junkie who’s not afraid to tell his male friends he loves them. But even this trace of apparently sincere emotion is finally disavowed and parodied, as Flip becomes the human punch line to the gag that frames the film (and provides its title).

Ultimately it’s a disappointingly flat, limited film, in a couple of senses. Anya prides herself on her lack of feeling, but her sexual fluidity makes her the character most open to the outside world, able to intervene in situations in surprising ways. Otherwise, you’d think that the interaction between Felafel‘s varied eccentrics would spark off any number of unforeseen possibilities, but apart from the matey rituals of the bong in the Brisbane segment, most of them have nothing to say to each other. In the lounge room of the Sydney apartment, the desultory conversation suggests the housemates might as well be on different planets. On the couch Sophie Lee’s bimbo character is whining as usual: ‘Nobody cares how I feel, do they? Nobody cares that I was raped by my uncle when I was fourteen.’ Meanwhile the German guy just behind her can’t help marvelling at the soapie actors on TV: ‘They’re very fit, aren’t they? Very, very fit.’

That kind of non sequitur is Lowenstein’s favourite comic device; usually such fruitless remarks are surrounded by pauses, left to hang in the air. Gone is the overlapping dialogue that gave a sense of collective urgency to the flux of Dogs In Space. Also gone are the same film’s extended tracking shots, for similar reasons: people here seem too jaded to throw wild parties, or even walk from one room to another more often than they need to. Instead Lowenstein prefers to arrange the actors in static, frontal tableaux. Danny tends to occupy the foreground – strumming ‘California Dreaming’ on his guitar, or just slumped in the middle of the screen looking gaunt and woebegone, staring past the camera like Kermit the Frog. As a kind of spatial equivalent to the disjointed dialogue, Danny’s close-up brooding is typically counterpointed in the shot by some unrelated incident or gag in the middle distance. As in cheaply-made cartoons, each level of action seems to be placed on a separate, depthless plane: slices of life.

Felafel‘s longest, most formally ambitious sequence marks the only point where Lowenstein makes an effort to recapture the crazed energy of Dogs In Space (it also has the film’s only real party). Taking place just before Danny leaves Brisbane for Melbourne, this sequence is again constructed around multiple planes of action, this time going beyond the confines of a single room or shot. In the backyard, Anya and her goth girlfriends are holding a ‘full moon’ ceremony that will culminate in a mock human sacrifice. Meanwhile in the lounge room, Sam and Danny are keeping a sceptical eye on proceedings. Eventually Sam is coaxed into joining the ceremony while Danny retreats up the hallway to the front veranda. Here, he finds Flip ‘moon-tanning’ in a deckchair and looking out at the street in front of him, where one of the neighbours is reportedly having sex with a rugby player.

Already four separate scenes have been implicitly superimposed on top of each other, and from here things get more complicated still. Once again the escalating frenzy aims at conjuring up a mock apocalypse, with the house as a microcosm of a world in collapse. But while a number of weird events may be going on in different parts of the house and its environs, even at their height they never quite transform their shared venue into a unified space. Most often our awareness of several things happening at once is aural rather than visual, with continuing, overlapping sounds that eventually range from Nazis carolling show-tunes to whirring power tools threatening to tear the place apart.

With the walls finally tumbling down (in a partial reprise of a memorable Dogs In Space scene) there’s a possibility that the flattened lives of the characters may be either destroyed or transformed. However, the latter has already happened for Sam and Anya; they’re oblivious to everything around them, having entered an intimate space of their own. Hovering in the lounge room, Danny looks out to the backyard and sees the two women locked in a kiss. So what does our hero do, when faced with what might be, for him, a somewhat awkward situation? More or less what he does all the way through the film: he grabs his guitar and overnight bag, nervously checks to see if anyone’s watching, and slips out the front door.