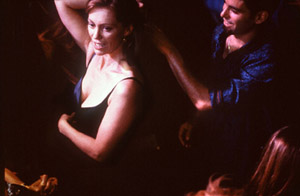 It seems only fair to declare my prejudices right from the start. I possess a great fondness for the multi-strand narrative structure in film: that delicate interweaving of plotlines and characters to form a larger scale mosaic rather than the classical form which pins its hopes on two or three main characters and relegates all else to support. I find something oddly comforting about this organisational style. The very inter-connectedness between the lives of the characters offers some sort of reassurance, much like the concept exploited in Fred Schepisi’s Six Degrees of Separation (1993) which suggests we are all bound to everyone on the planet by a maximum of six removes. This mosaic structure, employed to good effect by directors like Robert Altman, is characterised by its diffusion of narrative impetus over a series of smaller strands that intersect and cross at various stages of the film. It is a process that seems to offer a rounder, more comprehensive social view when in the hands of someone who can effectively juggle the numerous strands this form demands. Altman’s Nashville (1975), for example, uses this structure to paint a wider, more inclusive portrait of this heartland of Country & Western music and, by a small leap, America itself. Similarly, Michael Winterbottom’s recent paean to contemporary London, Wonderland (1999), balances the distinct lives of three sisters to paint a broader canvas of the city and its people than could be achieved by relying solely on the Gina McKee character, for instance. It is this balance of experience spread over a range of characters which draws me into these webs; the sense that this is not one particular person’s experience and therefore removed from my own. It is instead a community’s experience and seems, at least to me, more inclusive in its scope and ultimately more comforting.

Ray Lawrence’s Lantana (2001) offers us this same mosaic-like, community-based structure. The apparent randomness of the tales presented to us gradually takes on a sense of place and of family as we spin further and further into the connections that exist between strangers. There is a sense, common in these films, of moving from a position of isolation to a position of connection and understanding as the links between mother, father, colleague, neighbour, therapist, and friend take shape. But for me, Lantana works because it also succeeds in taking these linkages to their uncomfortable extreme. Connections that initially seem benevolent and comforting soon develop into an intense claustrophobia. Lawrence’s film twists the structure into a binding morass of responsibilities, duties and motivations, where coincidental encounters are more likely to lead to betrayal than an intimate synchronicity. So whilst Lantana adheres to a structural sense of connectedness it also manages to stifle and restrain through such connections. The community simply doesn’t seem large enough to escape the ties that link people to those they meet, even briefly. And whilst it’s fair to say the structure is not always successful, and some strands certainly work better than others, Lantana on the whole does succeed in juggling these linkages, balancing out characters, incidents and connections with style and with sometimes an almost perfect grace.

The origin of the narrative and the character that remains at the centre of the film is police officer Leon Zat (Anthony LaPaglia), a man fending off middle-age despite his body’s warnings, a man seeking something new in an affair with the desolate Jane (Rachael Blake). Leon’s wife Sonja (Kerry Armstrong) feels the dissatisfaction in Leon and seeks assurance through a therapist, Valerie (Barbara Hershey), who is struggling with her own problems, not least of which is the recent death of her child, and her marriage to the dour John (Geoffrey Rush). From this platform we spin further into the web of characters that includes Jane’s neighbours Nik (Vince Colosimo) and Paula (Daniela Farinacci), her estranged husband Pete (Glenn Robbins), another of Valerie’s patients Patrick (Peter Phelps), and Leon’s colleague Claudia (Leah Purcell). This raft of characters, each one with their own story, comes into sharper focus once one of them disappears and Leon and Claudia become involved in the subsequent investigation. It’s in these early stages before the disappearance that Lantana struggles a bit to find its feet, trying too hard in its earnest approach, with the script by Andrew Bovell teetering between insight and cliché.

Suffering most of all is perhaps the strand you’d expect least problems with considering the cast, but the Hershey/Rush marriage is the hardest of the strands to swallow. The bitterness and rancour that exists between them as they both struggle to come to terms with the death of their daughter (she goes public and writes a book, he withdraws and disappears for long stretches) is forced and sometimes facile; Valerie’s bland aphorisms and Oprah-psychology sit as uncomfortably as John’s grimaces and snarls. It pushes the film a little askew, since the other threads have a comfortable naturalism such as Nik and Paula’s suburban marriage and Sonja’s interactions with her children, Leon, and her dance class. Although John and Valerie’s marriage, and to a lesser extent Valerie’s sessions with her intimidating patient Patrick, come across as stilted and awkward, there is also much in these early stages to enjoy. Leon’s abrupt encounter with a jogger (Russell Dykstra) has a great physicality and twists neatly into the unexpected. Jane’s tentative attempts to break her isolation both with Leon and with Nik have a raw poignancy that works. But the true force of Lantana only really kicks in once the investigation gets under way when the characters, all encumbered by their own weaknesses, are each tested and judged by their ability to meet the demands circumstance and happenstance throw their way.

Lawrence sets up the intersection of strands quite beautifully in the second half of the film and his control of the actual storytelling process becomes one of its greatest strengths. If his early treatment of Valerie and John is a bit clumsy and heavy handed, he more than compensates for this later on. He not only manages to weave the strands to both dramatic and comic effect but also manages to offer weight and balance to each encounter. His approach is to create scenes that appear to suggest one perspective or one primary goal, only to spin that expectation around in the closing seconds of the scene. Lawrence utilises this tactic time and again and it doesn’t seem to become repetitive; it’s more the fact that he can consistently fox the audience by leading them to believe one thing and then unexpectedly exposing another. So whilst Nik and Paula’s reunion towards the end of the film seems to be a conclusion to their story, and a demonstration of their commitment and belief in one another, with one subtle camera move we come to see that this episode has really only served to comment upon Leon’s marriage. It is Leon who is truly at the centre of this scene. Similarly, a moment in a Latin dance club appears to be about to instigate a greater intimacy between Leon and Sonja but in the closing seconds the wedge is driven in deeper between them by a cutting remark from Leon and our expectation of the scene is overturned.

The success of this, the delicate balancing of the power in each scene, and the final subversion of that expectation is what makes Lantana such an enjoyable and worthy film. Lawrence leads you towards things that seem obvious and then skilfully snatches them away at the last moment, redirecting you down another path. But what also works with this structure is the increasing sense of Lawrence as the story-teller, doling out information bit by bit, cutting away at key points to leave you dangling, offering morsels of information to keep you tantalised. It’s done with such artistry that you are aware of the power of deliverance where he deliberately withholds specific moments, connections and discussions, until the time is dramatically right. The power of much of this film comes from the direct manipulation of what we witness and when we are permitted to witness it. Despite the fact that the film is by no means flawless, the strong script and good performances give a sense of texture, weight and structure to the film and lead to a grander payoff for the audience.

Added to this awareness of Lantana as an exercise in structure and storytelling are some fine performances from the ensemble cast that capitalise on these shifts in perspective. Kerry Armstrong and Rachael Blake in particular make Sonja and Jane endlessly watchable. Armstrong moves Sonja confidently out into wider spaces (she always seems to be moving somewhere else, dancing, fidgeting, walking out of doors) while Blake spends most of her time as Jane watching the world pass by her window, peeping through curtains, seeking something else, something better, but in an increasingly destructive, almost masochistic fashion. LaPaglia, Colosimo and Farinacci are also strong, with the relationship between Nik, Paula and Jane one of the most effectively executed strands in the film. With Lantana‘s narrative traversing most of Sydney, Lawrence’s film succeeds in creating a breadth of locale for this community. Mandy Walker’s cinematography and Paul Kelly’s score add to this distinct sense of place in terms of character and environment. It’s true that in the final moments, with the mystery solved and the uneasy task of tying up loose ends, that the film loses its sense of balance. Robert Altman has relied on the catastrophe to tie several of his multi-strand films together (assassination in Nashville, and an earthquake in Short Cuts [1993] and P.T. Anderson tried raining frogs in the bombastic Magnolia [1999]). Lantana wraps up with the resolution of an investigation but there’s a sense that Lawrence felt that this was not enough to conclude the film. His decision to give each character a sort of coda fumbles quite badly, even stooping to grant Patrick, the churlish, possessive homosexual, a ridiculous Stella Dallas-inspired moment in the rain. Even granting this misjudgement, what has come before offers such grace and humanity that it’s easy to forgive the occasional clumsiness in its resolution. There are some films that give pleasure despite their flaws and this is one of them. Although it’s been fifteen years since Ray Lawrence’s previous film, the remarkable adaptation of Peter Carey’s novel Bliss (1985), Lantana ably lives up to its predecessor. It’s not hard to see why it was voted most popular film at the recent Melbourne International Film Festival. Lantana pleases simply because it understands how to tell a story, demonstrates an ability to mess with expectation, and offers a vision of contemporary Australian society that rings perfectly and brilliantly true.