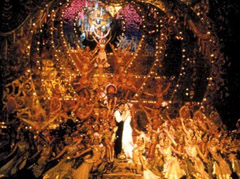 When Baz Luhrmann’s latest Red Curtain movie opened the Official Selection at Cannes last month, the critics had already made up their minds. As far as most were concerned this was film as disco, or even Karaoke: “une comedie musicale americaine (sic) gorgee de kitsch pop” (1) is a fair sample of gratuitous (in this case, the leftish road) withholding of praise on anti-Ronald Macdonald grounds.

But (as Luhrmann himself has always pointed out), the punters love it. So what can you say about a film that is so theatrical in conception yet so technically cinematic in execution? Perhaps nothing except the great line from The Magnificent Seven (John Sturges, 1959):

Q: If he is fastest with knife and gun then who does he compete against?

Nevertheless it was the minimalist comic Nanni Moretti who carried off the (always a little problematic) Palme d’Or the next week for his latest wistful and uncharacteristically sombre La Stanza del Figlio (The Son’s Room, 2000). Clearly the jury this year were looking beyond the conventions and artifice of theatre’s red curtained fourth wall.

Moulin Rouge (2001) takes as its setting the myths of Bohemian Paris and the myriad texts of La Vie Boheme that accrete around whatever may have been the ‘real’ Moulin Rouge. But even in Montmartre itself, the locals feel such a dream world never really existed except as some kind of artistic theme park. Just watch the hundreds of sketch artists swarming around each day – everyone a taller Toulouse-Lautrec – swarming to trap (and sketch) the tourists and you will see the power of the Artistic Fallacy.

In fin-de-siecle France (the cliché itself is a loaded gun), Luhrmann is set free – as has been everyone else, delighted to cash in on the Bohemian Rhapsody – and in this instance, to play games with the equally serviceable Greek legend of Orpheus. In this Luhrmann is by no means first to drink at the well. After all Marcel Camus slept on the beaches of Rio to make Black Orpheus in 1957 and that movie certainly shifted the tragic story of Eurydice and Orpheus into the glitter and sham of Carnivale along with superimposing that old legend onto the New World of the Bossa Nova. If Baz never saw Black Orpheus someone must have whispered it into his ear as a baby.

For Moulin Rouge is the reincarnation of that gutsy and tinfoil piece: a colonial appropriation of the newer myths of ‘black’ and forbidden sensuality. Just think of Josephine Baker, for in many ways Nicole Kidman’s Satine is a ‘white’ (fashionably kitted out with Camille’s trademark illness) version of her onto the de Sadian index cards of Parisian literary and popular memory. Add a dash of Cornel Wilde hawking blood onto the piano keys as Chopin in A Song to Remember (Charles Vidor, 1945) and we are in the presence of more fables about Romantic Love and Death than Fox Studios’ press kit ever imagined.

In Orfeo Negro (Black Orpheus), the Orpheus myth is transplanted onto the soil of Rio de Janeiro during Carnival – the one time of the year that calls for unrestrained celebration, music, dance, and costumes. In order to save Euridyce, Orpheus must travel into the Underworld and bring her back to the world of the living. In Luhrmann’s Moulin Rouge, Christian never gets the chance – instead he’ll write (a novel? For Mills and Boon?) about it all.

Baz has never let a good precedent stand in the way of his storytelling. Why should he? Great tales bear retelling and so it is with Orpheus – and also with the so often silly fantasies of Parisian decadence as a sort of Ur-Naughtiness. After all, here again another director has been down this road for different reasons – but with the same focus on the impish force of Toulouse-Lautrec (‘un gentil nain priapique’) who recurs in such works, be they poems novels, movies or plays as a kind of Jiminy Cricket.

John Huston’s Moulin Rouge (1952) is based on the life of Henri de Toulouse-Lautrec, the 19th century Parisian artist whose growth was stunted by a childhood accident. Huston’s film presents, through Lautrec’s ‘distorted’ vision, an imaginary Montmartre and its bohemian characters. Again the music is memorable – in this case the theme song by Georges Auric.

Music haunts Montmartre, invades and is the centre of the Moulin Rouge myth. But it is kitsch – naked and celebratory – that invades Luhrmann’s movie.

Here’s the socialist newspaper Libération again under the header: “FRENCH CON CON” (that’s better left untranslated but you get the idea!); “un film grandiloquent…en rubanne comme une arbre de Noel…” (…glittering like a Xmas Tree…) (2) For Luhrmann, the joint (for Moulin Rouge was above all that) is the centre of a force field: here David Bowie and Sting can play with Auric, Jobim and the others who have dreamed or half-remembered the legends and myths of that greatest gin palace of them all.

On the night before the Australian premiere of the movie, Luhrmann and Nicole Kidman appeared on the ‘7.30 Report’ ( ABC TV 21 May, 17.50 EST) with the hard man, Kerry O’Brien. But instead of a studio lit brightly for ‘truth’, the setting and the set-up had the Luhrmann Touch (though no one at the ABC is talking). Shots of Nicole were backed with masses of flowers, the cutaways of O’Brien were dramatically lit with what appeared to be coloured gels on the fill light. Even the ABC, it seemed, was preparing a pitch for some spin.

The notion of an all-controlling Luhrmann (pace Lubitsch) Touch is not unexpected: after all, the publicity materials from Twentieth Century Fox quote Baz enthusiastically demanding of his audience that they “get” (“decode” according to Luhrman in the press kit) the references to movies of a half century before – Gilda (Charles Vidor, 1946), for example, or the Dietrich of Blue Angel (Joseph von Sternberg, 1930) amongst so many hints and ‘intertextual’ references to other movies and ‘icons’ for film students and semioticians to decode for Film Theory 101. Well Luhrmann is on record (appropriately, not least in the May issue of The Australian Way [the Qantas in-flight magazine] as saying “A Bollywood flick in an audience participation ceremony. Who needs thematic thoroughness when everyone’s comfortable with high comedy, song dance and tragedy all in one? It’s the sort of cinematic style I’ve always been on about” (3)

Fair enough. But what drove Strictly Ballroom (Luhrmann, 1992) was a satiric anchoring in suburban verities. What powered the many-layered Romeo+Juliet (Luhrmann, 1996) was a magnificent text to support the whizzbang visuals, not to mention a great rock track.

Moulin Rouge has neither grounding, nor a solid or eloquent enough ‘book’ to anchor it. Instead a deliberately simplistic (anti-naturalist and that’s fine) plot that is necessarily familiar. Christian (Ewan McGregor), the young writer, will fall in love with the Moulin’s Star Satine (Nicole Kidman) who of course has, as noted, Camille’s tragic malady (Consumption should you be unaware) as well as a malevolent Duke (Richard Roxburgh) in pursuit. Tragic ending guaranteed.

All of this might matter more if the fabric of the music in Moulin Rouge was not so determinedly Middle of the Road (Eden Ahbez’s ‘Nature Boy’, indeed as the valorising musical text along with a decidedly unironic ‘Diamonds are a Girl’s Best Friend’?). The most cinematic parts of the movie are thus not the endless staged numbers (all crane shots, skycam, swooping dollies and all) but the few book ending scenes (yes, naturalistic) in which Christian looks back on his lost love as he pounds the Underwood in the classic starving poet’s Montmartre garret. This also allows lots of that layering of text and image that worked so well in Romeo+Juliet.

But despite some brave performances: John Leguizamo is terrific as Toulouse-Lautrec, and so is Jim Broadbent (yes, that old Mike Leigh favorite) as Zidler, the Moulin Rouge Impresario. These performances are muted by both the general dullness of the music and the gorgeous but ultimately distancing staging and costumes. Sure, the CGIs and modelled Paris are imaginative delights but they are there like the Red Curtain of the opening and closing scenes only to remind the (hardly unconscious?) audience that this is not a naturalistic project. All this in a Paris skyline that most resembles Baci packaging.

But really the rot sets in from the moment the Green Fairy (Kylie Minogue) flies off the label of an absinthe bottle and inspires the little group of Romantic Bohemian Revolutionaries (including an unamusing caricature of Erik Satie by Matthew Whittet – not his fault) who form the Greek Chorus to all the goings-on. Indeed this amusing enough moment of fantasy simply serves to remind one of the similarity of the character of Satine as presented here and the Singing Budgie herself at her most Micro-Diva-esque.

As the rodomontade of over staged set pieces continues, circling the tragic dynamics of the minimal plot endlessly, one’s eyes are drawn to other things, a scarf here, a streetlight there, all visual delights but signifying little beyond their craft. Indeed the highest pleasure of the movie at times seems to be that all those excellent Aussie film workers got to work on a big budget production for almost a year. But that’s not enough of a guilty pleasure. Nor is this movie.

Luhrmann’s repeated (career long) quashing of any adverse critical comments along with his assertion of the gut appeal of his work – when the most desired demographic is women 16 to 39 – puts him in strange company. The audience for Titanic (James Cameron, 1997), as it were. That said this movie is sure to make at least a quarter billion in US dollars by year’s end. But that’s another argument!

Such appeals to a mass audience ‘out there’ also seem problematic (though who can deny the selfsame box office figures for Romeo+Juliet?). But when the verbal and visual punning and playfulness and the interplay of action and written text of Romeo +Juliet is compared to that of Moulin Rouge the resistance of the Shakespearian text to subversion is palpable. For in Moulin Rouge the song lyrics (‘Silly Love Songs’ for example) are treated too literally for their weight. In the end the soundtrack medleys all too concretely recall those old ‘bouncing-ball’ sing-along movies.

In such a case, the music, the staging and the mise en scène had better be up to more than an evocation of an outmoded theatricality. In Moulin Rouge they are not. By far the most powerful musical number, acting as a metaphor for impending tragedy is the chilling tango ‘Roxanne’ (Sting) featuring bellowed vocals from the Unconscious Argentinian (a fine performance from Polish actor Jacek Koman) and Nini Legs-in-the-Air (Caroline O’Connor). For this sequence at least we are gripped by a powerful fusion of music and narrative with a genuinely mythic resonance.

But in the end Moulin Rouge does some disservice to so many myths, not least those of all the actual and fictional artists and their dreams that still hover and swarm around the real or imagined Montmartre itself. In abandoning the realist power and naturalist tendencies of cinema Baz Luhrmann has also, ironically, ignored much of cinema’s potential for magic as well as its essential difference from theatre. In that case the post credit assertion that this film is about …Truth, Liberty, Freedom and above all Love comes to seem a rather careless act of hubris.