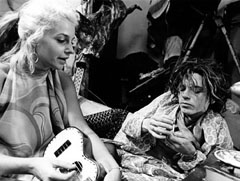 The release of Richard Lowenstein’s latest film, He Died with a Felafel in His Hand (Australia, 2001), an adaptation of John Birmingham’s comic novel about house-sharing, provides an opportunity to revisit his second feature, Dogs in Space. Dogs in Space is also set in a shared house. While often humorous, it is ultimately a cautionary tale about those usual suspects, sex, drugs, and rock ‘n’ roll (although this did not prevent the film from receiving an ‘R’ rating when first released).

It is 1978: the era of punk, Countdown, the Fraser government and Skylab. A disparate group occupies a chaotic, filthy two-storey house in the inner Melbourne suburb of Richmond. Drugs are as common as people crashing on the floor after a big night. The household nominally comprises Sam (Michael Hutchence), a man-child and front man for the band Dogs in Space, his lover Anna (Saskia Post), Tim (Nique Needles), Luchio (Tony Helou) an earnest engineering student, Grant (Adam Briscomb) a stud, and hippies Tony (Peter Walsh) and Jenny (Caroline Lee). Assorted hangers-on include the adolescent runaway, the Girl (Deanna Bond), and Leanne (Sharon Jessop), a pregnant Westie trying to snare Luchio, and there are occasional visitors such as a socialist to whom nobody listens, a land rights activist (Gary Foley, more or less playing himself) and Chainsaw Man, a bloke obsessed with his equipment (Chris Haywood, in a marvellous cameo).

Dogs in Space has an episodic narrative, covering a flow of parties, gigs, bed hopping and the obligatory road trip spread over several months. The film moves gradually towards its inevitable tragic conclusion, yet it has little dramatic tension. Nor are the characters developed in depth. Rather, they exist on the surface Lowenstein creates, constantly moving, as if trying to avoid sustained interaction with other people. Indeed, serious conversations are rare, brief and truncated, and the awkwardness of these moments is reinforced by some inconsistent acting.

However, this loose, even shallow, structure is a deliberate strategy. These caricatures and their experiences are meant to be emblematic. This house and the way it is inhabited represent a certain subculture, specifically the punk/new wave music scene in Melbourne in the late 1970s. In this respect, the central theme of Dogs in Space is nostalgia. Notably, the film commences with footage of the first Russian space missions in the late 1950s. (In one of these a dog is launched into orbit, hence the title.) It concludes with Sam, now marked as successful, performing a song entitled “Rooms for the Memory”, which is intercut with shots of a funeral and the group’s eviction. The story draws on the experiences of Lowenstein and Sam Sejavka, then lead singer of Beargarden and lately a playwright (and not Nick Cave as is sometimes thought). A diegetic voiceover at the beginning mentions that only the names have been changed, and Dogs in Space is dedicated to the real victim of the climactic heroin overdose. The film is even shot in the same Richmond house shared by Lowenstein and Sejavka (and which was still there the last time I passed by). However, rather than meticulously recreating a pristine past, the film evokes a previous era, already lost by the time of its release. The anecdotal framework, overlapping dialogue, temporal confusion and the use of Skylab footage as inserts are more suggestive of the eccentric paths of memory or what Freud called the dream-work than a coherent historical account.

The film’s visual style also contributes to this impression of reality. Lowenstein and his usual collaborator, cinematographer Andrew de Groot, make constant use of tracking shots and bold colours. This is clearly influenced by their previous music video work (see the seminal clip for Hunters and Collectors’ “Talking to a Stranger”). Indeed, the ending is a Michael Hutchence film clip. However, although the camera movement is sometimes frustrating (Lowenstein is no Robert Altman when it comes to managing multiple conversations), it has the effect of anchoring the film’s characters in their milieu. It traces, as André Bazin might have said, their banal, comic or sad trajectories.

It is questionable how relevant Dogs in Space is today. The soundtrack will certainly interest some viewers. In addition to three songs by Hutchence, it contains material by Ollie Olsen, Iggy Pop, John Murphy and Marie Hoy. Nick Cave fans will appreciate a snippet of The Boys Next Door’s version of their classic “Shivers” (but pine for the rest of the clip, especially when Hoy performs the song at a gig). There is also the curious casting of Michael Hutchence, a figure not normally associated with the subculture portrayed in the film. Hutchence, who resembles Lowenstein at the time of shooting even though his character is based on Sejavka, does not so much act as crawl around, often hidden beneath the security of a blanket.

However, Dogs in Space is not as daring as was thought in 1986. Indeed, its depiction of women, for example, is quite conventional. Nor does it compare well with other films. Pure S (Bert Deling, 1976) and Going Down (Haydn Keenan, 1982) are arguably more significant examples of Australian films about inner city life. Sid and Nancy’s (Alex Cox, 1986) portrait of the desperation of two people caught in rock ‘n’ roll hell is more memorable (albeit that film had Sid Vicious as source material). Trainspotting (Danny Boyle, 1996) has superior energy and wit. Perhaps the importance of the film for contemporary audiences lies in our recollections. Many of us have lived in shared houses. As this part of our lives recedes, we often enjoy regaling our friends, particularly when fortified by wine, with details of the parties, drugs, squalor, poverty, and insane housemates we endured. Dogs in Space permits us to linger dreamily with the legend of our youth for a while. The facts are another matter, as the all too human circumstances of Michael Hutchence’s death testify.