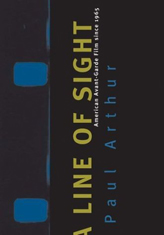 If reporters write the first draft of history, critics write the second. And like reporters, critics have one signal advantage over historians and theorists: they see the entire field, rather than what gets preserved. They aren’t necessarily any more accurate as a result. But their version of what happened is often rich in the details most scholars can’t provide.

After 30 years as an avant-garde film critic, Paul Arthur’s knowledge of the genre is encyclopedic. And unlike most academics, he was an eyewitness to the films and events he chronicles, good and bad. A Line of Sight: American Avant-Garde Film Since 1965 collects nine of Arthur’s essays, spanning two decades. The essays address a wide variety of themes, but the book isn’t a history, and doesn’t purport to be one. Rather, it’s an overview of what Arthur saw, bracketed by his attempt to make sense of it all.

His model is Visionary Film, P. Adams Sitney’s canonical history of avant-garde cinema, first published in 1974 (1). Unfortunately, unlike Sitney, Arthur can’t rely on style. He’s got a mild case of thesaurus syndrome, and can be tough going at times. It’s a shame, because it obscures his real insights into the history and future of avant-garde filmmaking. Sitney established a taxonomy of avant-garde film: lyrical, mythopoeic, structural, and so on. Most of Arthur’s essays effectively propose new categories: the film portrait, the urban pastoral, the TV collage film, and so on. Some are more convincing than others. But the real wonder is that Sitney’s approach finally seems uncontroversial.

Until recently, Visionary Film was a target, not a model. By the mid-’70s, ideology had hijacked avant-garde film, replacing Sitney’s polite criticism with propaganda. Avant-garde film wasn’t considered an art form, but a kind of pathological condition, itching to infect commercial cinema – or “bourgeois culture” as a whole – and transform it from the inside out. Read Arthur’s essays in chronological order, and watch the pathology go into remission. Earlier essays, like “The Resurgence of History”, mouth its lingo, even as they question its premises. But later essays just pretend like it never existed.

Arthur is at his strongest when defining and analysing new aesthetic categories. But some are more robust than others. In general, the categories seem most convincing when linked to a particular historical moment or aesthetic shift. In particular, Arthur’s suggestion in “The Last of the Last Machine?” that the ubiquity of television affected the aesthetic choices of many younger filmmakers is provocative and insightful.

By contrast, his analysis of avant-garde film portraiture in “Identity and/as Moving Image” is unconvincing. Linking the Lumière brothers to Andy Warhol to Stan Brakhage to Shirley Clarke as practitioners of the film portrait just negates the descriptive power of the category. It’s not enough to highlight similarities among various films and styles. Those similarities are only interesting if they mean something. And here, I can only see commonalities if I choose to ignore far more fundamental differences. I remain unconvinced that making films about people is a feature of the avant-garde, rather than of movies in general.

“Springing Tired Chains”, Arthur’s stab at defining African-American avant-garde cinema, is even less convincing. The usual film theoretical bromides – “critical contestation” of “bourgeois ideology” and “urgent dialogue” with “televisual images” – abound. But these tired generalities needlessly obscure the fact that Arthur simply wants to call attention to some first rate filmmakers, like Marlon Riggs, Lawrence Andrews, and William Greaves. Who are indeed excellent. Even Arthur admits, “it is far too early to consolidate black experimentalism under the rubric of a movement.” Maybe there’s no reason to think there’s a “movement” at all. And that’s fine.

Thankfully, Arthur is a critic first and a theorist second. In other words, he focuses on describing and understanding actual movies, rather than ideas about movies. In keeping with that, he defines avant-garde film forensically: if a movie is “financed, completed, exhibited, and promoted” like an avant-garde film, then it is one. There’s plenty of merit to that approach. Not because avant-garde movies are uniquely amenable to facile Marxian categories, but because they’re aimed at a very different market than commercial films. Filmmakers choose how to make and sell their movies, and they do so based on their estimation of who’s buying. That they’re sometimes mistaken only proves that the market ultimately defines the merchandise.

Oddly, Arthur dwells on the “anachronism” of avant-garde filmmakers personally presenting their films. His claim that “the avant-garde in its essential outlines still conforms to cinematic modalities put in place at the time of Lumière and Méliès” is just obviously false. Lumière and Méliès were essentially a franchise, and sold a commodity. Sure, they were great artists. But they didn’t sell to the art world. Avant-garde filmmakers do. While avant-garde film is certainly “anachronistic” in some sense – defections from film to video are the rule, not the exception – in-person screenings just reflect market demand. It’s high time for artists to realise that you can decide what to make, but not what people will buy.

If Hollywood is the dream factory, the avant-garde often seems to manufacture delusions. Sometimes they’re inspired, other times they’re just absurd. The New Narrative movement was among the more egregious examples of the latter. An early ’80s brainstorm fueled by a combination of minimalism and radical chic, New Narrative hoped to sell revolution to the masses via avant-garde feature films like Lizzie Borden’s Born in Flames (1983), Bette Gordon’s Variety (1984), and Yvonne Rainer’s Journeys From Berlin/1971 (1980), betting that commercial distribution would “create a crossover model for avant-garde reception.” In other words, it assumed that the public demanded longer avant-garde films: a counter-intuitive proposition, to put it mildly. In “The Last of the Last Machine?” Arthur notes – argument is hardly necessary – that the facially absurd premises of New Narrative doomed it to economic failure.

But Arthur also considers New Narrative an aesthetic failure. It planned to hijack Hollywood realism, figuring that “conventions and their ideological subtexts can be simultaneously invoked and reformulated or unmasked.” Or rather, it hoped to use commercial style to sell avant-garde radicalism. That certainly didn’t work out as planned. If anything, the tedious puerility of the New Narrative films made the avant-garde less appealing.

And yet, the New Narrative films really suffered from incompetence, not ideological error. Arthur tacitly assumes that avant-garde means politically radical, and that the business of the avant-garde is to “unmask” ideology. But unless you think art reduces to politics, that’s a pretty unsatisfying explanation. Frankly, Arthur doesn’t really seem to buy it himself. It’s pretty clear that he objects to New Narrative because it crowded out the shorter, more lyrical films he prefers, not because it’s ideologically unsound.

Still, he does his best to mask his distaste. And that’s too bad, because New Narrative deserves a healthy does of contempt. The bully of the avant-garde, it aggrandised itself by mau-mauing a marginal genre of filmmaking, and delivering a near-toxic dose of academic Marxist nonsense, identity politics, and bogus theorising. It took avant-garde film more than 20 years to fully recover. It’s a wonder it ever did.

Like many avant-garde friendly critics, Arthur seems to have internalised the implicit avant-garde honour code: if you don’t have anything nice to say, say something non-committal. As a result, much of what passes for avant-garde film criticism has devolved into banality, the journalistic equivalent of small-talk at a gallery opening. That kind of solidarity is understandable, after the shoe-on-podium tactics of the New Narrative crowd. But it’s no longer necessary, if it ever really was. As it stands, Arthur’s book is a first rate, first hand account of the films that contributed to shaping avant-garde film over the last 40 years. Next time, he should let us know which films made a contribution worth celebrating, and which didn’t.

A Line of Sight: American Avant-Garde Film Since 1965, by Paul Arthur, University of Minnesota Press, Minneapolis, 2005.