According to legend, a mermaid once surfaced in the Vistula river and was captured by a traveling merchant. When she sang out in distress, a group of Polish fishermen fell in love with her and came to her aid, rescuing her from the merchant’s cage and returning her to the river. In return for saving her, the beautiful mermaid promised to return to Warsaw and fight as their warrior if ever the city was in need of protection. Some modern myth-makers claim the Warsaw mermaid had a sister who swam to Denmark and became the little mermaid immortalized in Hans Christian Andersen’s fairytale. Either way, the tale of the Syrenka Warszawska (Mermaid of Warsaw) most likely originated in the myth of the Polish Wiła, water nymphs said to live in the Vistula river, with voices so beautiful they make their listeners lose cognisance of basic human needs. While not necessarily malicious, the Wiła maintain the ability to take human life.1 Today, the Mermaid of Warsaw adorns the walls, squares and streets of Poland’s capital, reminding citizens and visitors of the powerful female defenders lying in wait. 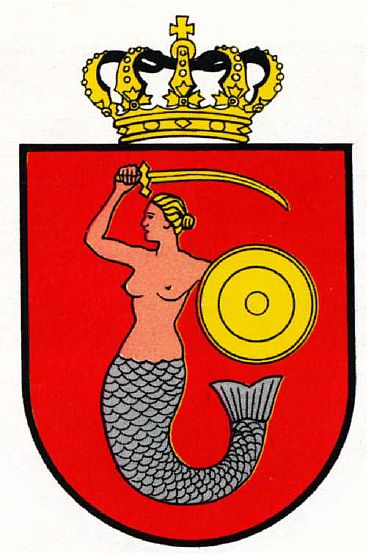 The Coat of arms of Warsaw

Regardless of the socio-political, historical, or national context, mermaid mythology revolves around a border-crossing being that exists somewhere between male and female, public and private, known and unknown. Agnieszka Smoczyńska adds to the canon with her feature length debut, Córki dancingu (The Lure). Smoczyńska’s mermaids are not “inferior to humankind.”2 The powerful sea creatures inhabit a human torso with long phallic tails, a liminal realm “in between” binary modes of identification. Set against the backdrop of a Warsaw nightclub, The Adria, The Lure sets fireworks to film genre and revels in its “acts of border crossing.”3 Part musical, part fairy tale, part romance, part horror, The Lure reimagines the Mermaid of Warsaw to scrutinise Polish gendered hierarchies under communism.

The film takes place in the early ‘80s, siren sisters Silver (Marta Mazurek) and Golden (Michalina Olszańska) emerge from the Vistula river and join a cabaret electro-pop band who regularly perform at The Adria. Originally conceived as a biopic of the Wrońska sisters, musical duo and composers of The Lure, the film morphs into a coming of age (and legs) drama as the siblings sing and dance through their first drink, first smoke, first kiss, all the firsts. Smoczyńska describes the “firsts” that propel the film forwards as “moments of passage from one world to another …an initiation, crossing a certain border.”4 This dynamic is echoed by the temporal and geographic setting. Poland in 1980 saw the formation of Solidarność (Solidarity), a labour union movement that used civil resistance to advance workers’ rights and ultimately played a major role in ending communist rule in Poland. The Polish United Workers’ Party’s (PZPR) attempted to throttle the movement by instigating martial law from 1981 to 1983, pushing Solidarity underground. Government crackdowns, coupled with clandestine resistance, meant that this was a nebulous and ephemeral society that couldn’t be fully inhabited by its citizens. By placing The Lure in this epoch, under the weight of history and before the dissolution of the Eastern Bloc, the mermaids’ coming of age narrative mimics the awkward and dysfunctional process of establishing a new national identity.

Before communism, Matka Polka (Mother Poland) was the “master narrative of womanhood” in Poland. Coined by poet Adam Mickiewicz, this “patriotic, conservative construct” spoke to the virtues of passive, quiet women working domestically to instill a sense of patriotism in their children while their husbands occupied themselves with the public domain of work and civil life.5 Mother Poland does not pertain to motherland, as the Polish language only accommodates ojczyzna (fatherland). Further, “no ‘feminine’ principle ever determined [the Polish] social order.”6 The logic that gave rise to Mother Poland was a form of social conservatism, mobilised as a coping mechanism in uncertain times.7 Traditional gender identities were, “a cultural resource for survival and resistance…in the context of ‘alien’ institutions of the state.”8 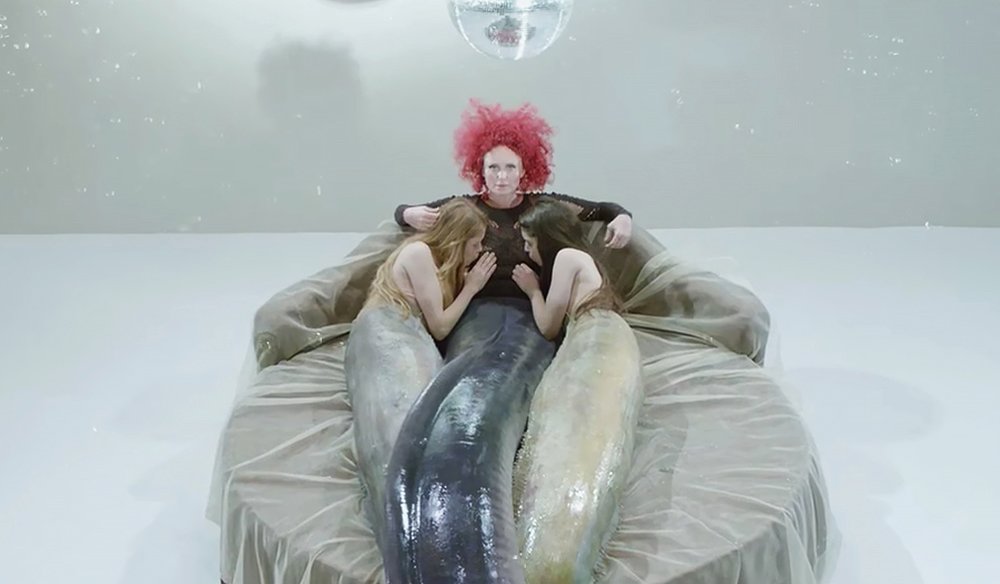 Under communism, all genders of the proletariat were expected to join the workforce.9 Consequently, the 1952 Constitution of the Polish People’s Republic legislated the equality of the sexes.10 However, wage labour often hinges on the unpaid labour of women, especially in regards to rearing the next generation of workers.11 For the next 37 years, Polish women were “emancipated,”—or, as one scholar puts it, “manipulated as an additional labor force”—leading to “women’s theoretically assigned and legislatively enshrined dual role” as both mother and worker.12 Polish women oscillated between traditional gender roles at home and modern working life in public, not unlike the liminal space of the mermaid’s habitat, existing in different worlds above and below sea level. 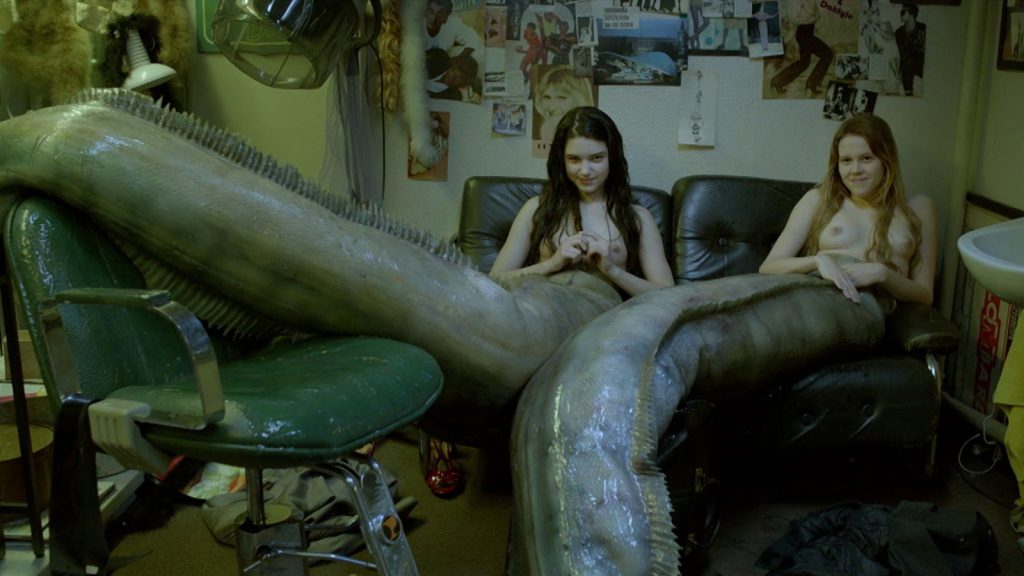 Before martial law was declared, women made up approximately half of the Solidarity movement. Indeed, it was Anna Walentynowicz who initiated the strike that would paralyze the Baltic coast and materialise Solidarity.13While the private sphere was wrapped in orthodox social mores, it also provided sanctuary from the “the long arm of the socialist state.”14 After being “an incubator of patriotism” since the inception of Mother Poland in the 1800s, the home morphed into a place of “deliberation, action, and articulation for women” where they could continue working for Solidarity and enjoy a sense of personal agency.15 Polish women mobilised the private sphere against the public stronghold of the State, a transformation akin to a mermaid growing legs.

Their opponent was the State, not the patriarchy. While Western sociology often frames women’s political activism as feminist, women on the other side of the Iron Curtain were suspicious of the utopian proclamations of the women’s liberation movement and saw it as being in close proximity to the socialist principles they were trying to overthrow.16 Polish ambivalence towards (Western) feminist discourse was compounded by the idea that it “produces [the male trait of] aggression,” while locally many women believed that the “real transformation of the world requires silence and calmness.17 The siren sisters embody this duality in The Lure, as the demure Silver is offset by the violent and outspoken Golden. 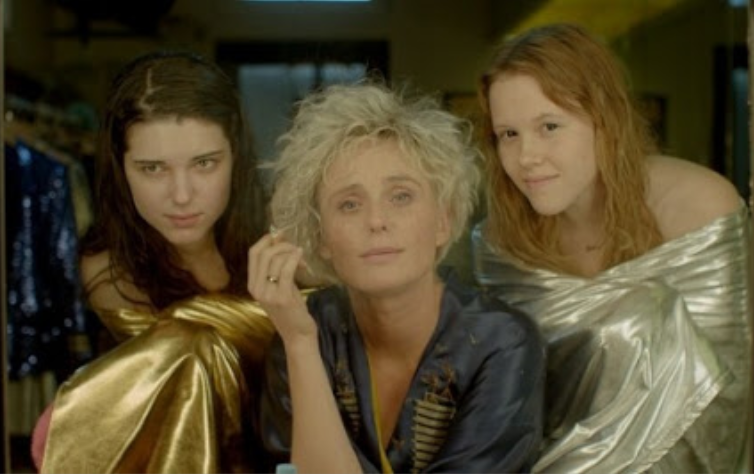 Much like Hans Christian Andersen’s Little Mermaid, Silver yearns for the human world. She’s willing to trade her tail for legs and lose her voice in order to gain a man’s love, which in this instance is the bassist Mietek (Jakub Gierszał) who can’t see past her scales. Mietek’s rejection doesn’t stop Silver from trying to make herself more agreeable, more beautiful, more human for him. In a visceral climax, Silver lies on a long metal surgical table and harmonizes with her sister in their final duet as her tail is cut off and another girl’s legs are sewn onto her waist. Silver is adverse to singing solo, only sings in duets with her sister or Mietek, and by the end of the film is literally voiceless. While silence is often synonymous with submission in the West, Agnieszka Kościańska argues that many Polish women view silence as an alternative rhetoric with transformative potential.18 Once silence has become “the center of [her] personhood and agency,” Silver demonstrates the power of silent protest.19 At the tail end of the film, Silver must choose to either eat Mietek and save herself, or let the sunrise dissolve her into sea foam. Retracting her sharp teeth, Silver lays her head on Mietek’s chest and sways with him as if singing a soft duet. Her silent refusal to kill the human is her protest against her own species, against her life as a mermaid. Just like Andersen’s Little Mermaid, Silver would “rather wither and die than rage.”20 Golden, however, cannot hold back the tide of her own fury and kills the young man covered in sea foam before disappearing into the Vistula river. Silver finds peace in performing her silent act, leaving the final act of vicious aggression to Golden. 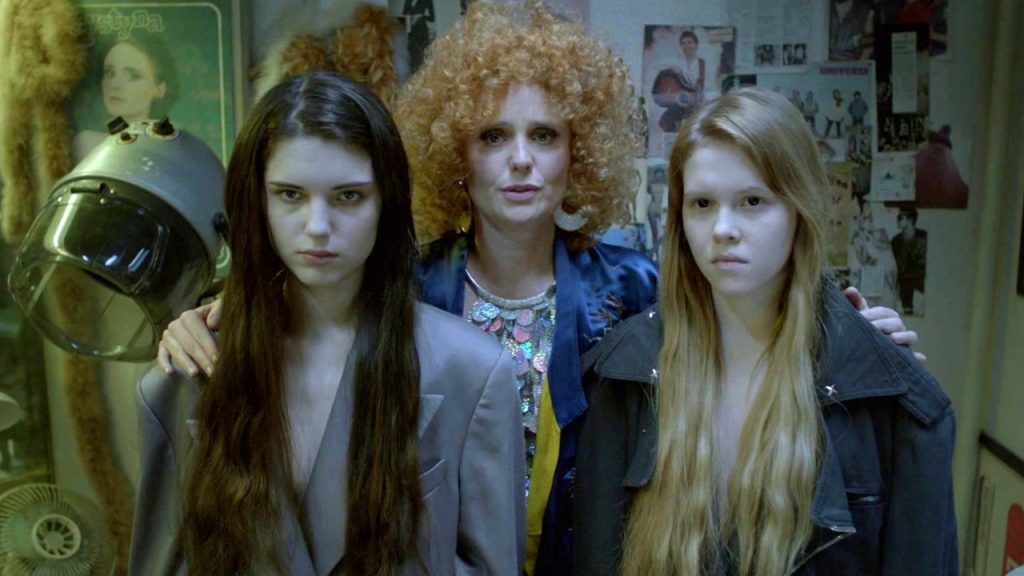 Shana Penn argues that the “the enemy inside” historical Polish literature is “a woman transgressing the boundaries of her gender role and taking over male competences.” The punishment for such “gender treason” is either death or oblivion,21 dramatised here by Silver’s demise and Golden’s self-imposed exile after murdering her sister’s former suitor. Silver’s transgression was her wish to become human in spite of her inherent inhumanity. Her inevitable doom couldn’t be avoided, even by replacing her tail with another woman’s legs.

Unlike Silver, Golden takes pleasure in being a mermaid. Both like and unlike man, woman, and creature; she embraces her gender-bending selfhood and accepts her powerful un-human body as her true being. Uninterested in men, other than as a meal, Golden turns to women for sexual and romantic fulfillment. Same-sex love in literature and film has often been seen as a “decentering abjection [and] a call to arms” to those who would feel threatened by such an “abjection”—in this instance, heterosexual men.22 Yet the mutual attraction between Golden and the Militia Lieutenant (Katarzyna Herman) is neither decentered nor abject. On the contrary, their sex scene is intimate and framed in multiple close-ups, interlacing feminine and phallic imagery as the Lieutenant cocks her gun and pours water over Golden’s hardened tail. Golden’s transgression of traditional femininity keeps her alive, but ultimately sends her back to the depths of the sea as she’s consumed by rage at the human world that destroyed her sister.Silver refuses to abide by subaquatic lore, while Golden ignores human laws. This means that the mermaids are framed as horror film anti-heroes who threaten human life and order. They each exhibit this threat in different ways. Silver yearns for a tradition she can never be a part of, thus breaking the seal of a world she cannot enter. Golden literally eats patriarchs, her sexual tension among men is not a desire of them but for them. The film places the abject—that which “does not respect borders, positions, rules…and disturbs identity, system, order”—in the spotlight, forcing us to examine it.23 In a typical horror film, this “confrontation with the abject (…the monstrous-feminine)” works to “eject the abject.”24 However, The Lure is not a typical horror film. It is a genre-smashing, border-crossing mermaid movie that allows itself to transgress its historical framework and reimagine the feminist agency within women living and working in communist Poland. 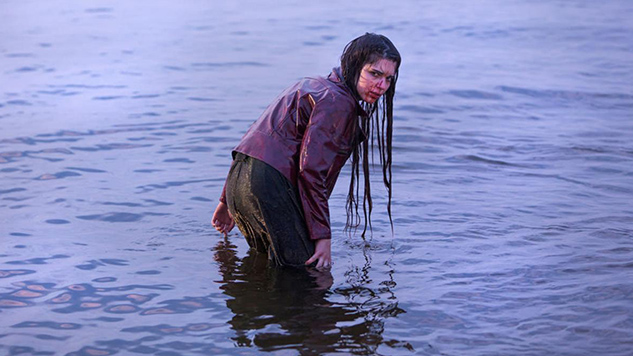 Another sea-creature inhabiting The Lure, who’s worthy of discussion, is the punk-rock-merman Triton. His band occasionally performs at the Adria. Angela Lovell describes him as, “another sea immigrant eager to alter himself in order to assimilate,” having severed his horns to pass more easily as human.25 However, Triton can transition into the world of punk rock with greater ease than the mermaid’s passage through cabaret electro-pop. This signals how rock music delineated a liminal space between the people and the State in ‘80s Poland. While bands couldn’t operate outside of socialism, they could “set up alternative spaces within it.”26 Concerts opened an alternative realm of opposition to the State and a continuation of the cultural openness of Solidarity. Rock music offered young Poles “the right to free musical self-expression…positive mental liberation and psychic intensity…[and] an alternative public sphere,”27 everything young Poles ached for under the oppression of communism and everything our sea creatures aim to find on land.

Smoczyńska’s sirens (and ‘80s Poland more broadly) explore precedent and possibility. The dichotomy between the familiar and the unknown creates a space that invites creating thinking, “wherein paradigms can be reimagined and rethought.”28 The mermaids “trespass on male territories and narratives of the male hero,”29 a historical trajectory that the women in Solidarity reflected. The Lure raises historical contradictions between passive and active, male and female, without trying to resolve them. Even the mermaids’ “externally incoherent” bodies—“disturbing hybrids”—resist inclusion “in any systematic structuration.”30 The mermaids’ incompatibility with pre-existing social constructs, above and below sea level, compels them to carve out new territory in a reconceptualisation of female agency in communist Poland. 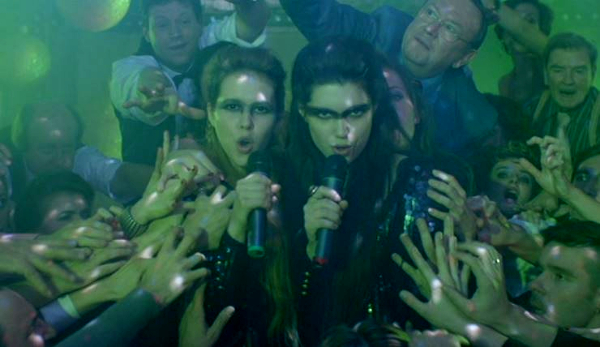