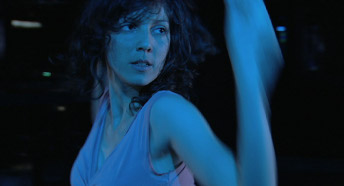 To iron out language difficulties has been one essential issue when watching Austrian productions, a problem eliminated now by English subtitling. The festival management was right to assume not every professional visitor masters the German language. This is a step in the right direction and a clear statement of self-confidence: no wailing anymore when it comes to the perception of the Austrian film industry abroad.

And so I have built a clever transition to my first film, a feature called März (March, 2008) by director Händl Klaus. Ostensible a story about the joint suicide of three friends that shocks a small community in Tyrol, it is also a beautiful story about the loss of dialect in Austrian youth culture. What happens to your movements and words when pressed by an unbearable event? Parents and friends act like they are catapulted out of their easy structured life into another world they have not been prepared for. The film editing and the storytelling get enriched by the rhythm of the dialect. The actors’ performances get forced to an unusual speed by their slow dialogue and unfamiliar accentuation. The spoken words fill up the locations and the non-spoken words have just been missed being said. The director gives no solutions, but he made an audience member smile by asking: “Why do you know my family that well?” 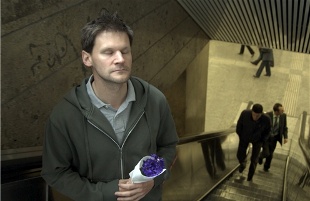 Schottentor is the name of a central underground station in Vienna and also the name of the latest film (2008) by Caspar Pfaundler (Lost and Found, 2001). Pfaundler starts his film about six characters living their daydreams with a staggering shot: surrounded by deafening subway noise, the director heads directly to the camera and explains how he originally wanted to shoot his film, but financially difficulties came in his way. He talks and gesticulates, points to a young lady and her story begins. With this opening, the film stays an unreleased dream and this gives an abstract and disturbing feeling to all of the stories bound together in Schottentor. It has great ensemble acting, with the amazing Gerti Drassl leading the way.

The documentary PianoMania by Lilian Franck and Robert Cibis is a good brainteaser when it comes to the artistic work of photography. The film is nothing but a television production and seeing the first few minutes on the big screen make you want to scream: “Get me out of here!” But there is no time for getting really angry, because the subject of their film is amazing and I felt almost trapped by wishing it would go on and on. The story focuses on the relationship between Pierre-Laurent Aimard and the German piano tuner Stephan Knüpfer. Knüpfer is a piano maniac, an artist himself when he is producing the proper tools for world-famous piano players. He screws, stretches, rasps and listens; he talks, winks and smirks. He is restless for the art of music. His work is meant to lift the real artist into sound heaven, and he brings you under his spell with the help of his stories and his accurate perfectionism. He spares no efforts to produce the almost perfect note. The film leaves you with nothing in your head what you have seen (yes, it was only television on the big screen), but with the sentences you have heard and that screwing, stretching, rasping and listening. So here is my question: Why make a film when a radio play would do and fit much more?

If you want something to look at and to remember, just go and watch the latest work by Mara Mattuschka: her Burning Palace (2009) blew my eyes away. As is usual in her co-operations with choreographer Chris Haring, she gives us five dancers strolling through the labyrinthine corridors of the Burning Palace hotel, putting emotions into wonderful movements, sounds and the climax of grimacing. Erotic is still not easy to define, whether in a person’s speech or movements, and Matuschka brings them all together and leaves the audience with that cheerful desire to move every inch of your body because you have something to say! The Diagonale dedicated a “Personale” (solo exhibition) to her work and I have to admit that I thought her work mostly unbearable, but now, together with Haring (he shares the director credit), she achieves something strong and timeless, beautiful, almost perfect, and full of humour and wisdom.

Josef Dabernig (Lancia Thema, 2005) put another essential question in his Hotel Roccalba: Is it an old people’s home, a sanatorium or just a hotel? He is not trying to answer that in his tableaus shot in black and white. Twelve characters in this group continue doing something and you get seduced into thinking about something intentional in this ballet of reading newspapers, fixing bikes and knitting socks. The question could also be: How can 12 characters manage being together in a small place without communicating but making it look like they are?

If you look at something, it is all about expectations. You want to be prepared for the next step, the next thing that happens. It is life experience that taught us the things we see and the things we expect during watching. In Laws of Physics Michael Palm gives an almost humorous lecture where these expectations will lead us: nowhere. In an amazingly balanced architecture-like shot, he shows us a corridor with a gully. A 15-minute zoom keeps our eyes there and our brains busy: when is water going to come and swallow up that little gully? A nerve-racking tension is built up while we watch people walking around the gully or a little spider scuttling along the edge of the screen. And, finally, the world is a place we are used to again and water is swirling, almost a salvation. 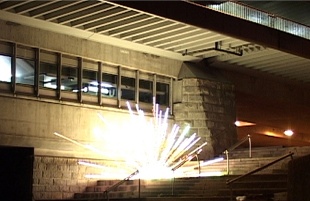 Also playing around with expectations in a knife-sharp, intelligent way is 12 Explosionen (12 Explosions, 2008) by Johann Lurf. He shot 12 locations where something is going to happen: right, there will be some explosion! But before the big bang occurs, we need to be patient, watch the night scenes in Vienna and then bang! But Lurf is playing around with the audience: if you have the chance to see it twice, you will find something interesting mentioned: are there really twelve of them? Is every explosion we see accompanied by the corresponding sound? And if we hear a sound, do we really see an explosion? Emotions get confused during these six minutes (yes, really six minutes) and, if you ever wanted to find yourself giggling while watching a blasting bridge, this is your chance.

On the basis of the work of the Austrian scriptwriter Anna Gmeyner (1902-1991), a special programme gave the opportunity to dive into Austrian film history again. Emigration of Austrian filmmakers was thematicised, taking something with them on a long journey – or, better to say, on a long escape – where there is no suitcase to fit all their memories and hopes. Among others, they screened The Passing of the Third Floor Back (1935) by Berthold Viertel, starring René Ray, Frank Cellier, the amazing Beatrix Lehmann and Conrad Veidt as a Christ-like stranger who shows up one day in a small guesthouse in London. The lodgers all deal with their private problems and let the housemaid pray for “one decent person in the world”, and her prayer gets answered. “I am a stranger to you and because of that I am able to see you a little more clearly than you see yourselves”, the strange man says in the end, when all the little stories don’t find their real happy endings but at least the characters have been watching and listening to themselves, wherever this will take them in their lives.

Clear messages are also found in Thunder Rock (1942), where Michael Redgrave gives the part of a disillusioned journalist holed up in a lighthouse in 1939. It needs the ghosts of the past to bring him back to something that he calls “his responsibility”. Based on the play by Robert Ardey, Gmeyner puts the message much more to the point: there are always different ways to look at someone. But there is only one solution if you want to change something. Don’t hide yourself, but go outside and make yourself heard and fight for your conviction. It is interesting to see how this world picture looks naïve in these days – the idealistic journalist who is fighting to get heard in his media, the newspaper. In days of the word wide web, where it is no big effort anymore to be heard and read, it sounds almost sarcastic. But films like that remind us that the need of human nature will never change – the need for freedom and impartiality, in private and at large.