In the years since the Emergency Diagonale and the festival’s defence at the hands of Austria’s filmmaking community against a coup attempt by the government, the country’s second-most important annual event in cinema had been unable to find its way back into track. Truth be told, the Diagonale had been in a state close to chaos: absurdly over-programmed with nary a unifying idea anywhere in sight, plus managerial problems galore and obvious even to those not in any (semi-)official loop – one quick glance at the staff told you. For many, the early spring trip to Graz developed ever more into a nuisance endured for social reasons – and – hey! – contracts do run out and are not renewed and, it was felt, with a different director the festival could again become the beloved fest it once was…

Right upon arrival this year one knew that things indeed had changed with Barbara Pichler, the Diagonale’s new director. For the first time in about a demi-decade, the staff looked relaxed, self-assured, and in all the right ways in control of things. Then, a study of the program made it pretty clear that Pichler had definitely understood what went wrong the previous years and changed things accordingly: less films (about one venue worth of works, mainly shorts); a further stress on the historical programs, featuring ao. a well-researched six-part retrospective of Austrian animation, a four program-homage to maestra Mara Mattuschka occasioned by her stunning new work, a danced paean to pleasure and perversion, Burning Palace (2008), and a tribute to screenwriter Anna Gmeyner (ao. Du haut en bas, Georg Wilhelm Pabst, 1933; Thunder Rock, Roy Boulting, 1942) which worked as well as a sequel to last Diagonale’s celebration of Gerbert Rappaport as it did as a teaser to this May/June’s program at the Austrian Film Museum on the history of Central European film emigration to Britain from the late ‘20s till the early ‘50s; and last but not least a return to the idea of the Special Guest, celebrating this time Stefan Krohmer, chronicler of the FRG’s unease with itself (Sommer ’04 an der Schlei / Summer 04, 2006; Mitte 30, TV-2007) and its recent history (Sie haben Knut!, 2003; Dutschke, TV-2009). The latter, one has to say, might still need a bit of development: in earlier editions, the Special Guest programs provided the festival with a backbone – while now, they’re just one Special among several others, which, it’s true, has a lot to do with the increase in historical programs; but that’s a detail, nothing more. And if Pichler will really go back to the festival’s original stretch of seven days instead of six, something she’s at least contemplating, problems like these will probably solve themselves in the process.

All of which made for a remarkable change of atmosphere which again made for kinder-hearted watching. Which again doesn’t mean that Marco Antoniazzi’s Diagonale opener Kleine Fische (2009), Händl Klaus’ März (March, 2008), Peter Jaitz’s Rimini (2008) and Caspar Pfaundler’s Schottentor (2009) suddenly looked like good films but rather one was at least more (than) willing to get involved with all that is promising, interesting or surprising in them: Antoniazzi’s unhurried patience and Händl’s brusk tenderness with their respective characters; Jaitz’s will to go weird; Pfaundler’s serious cum stubborn inwardness; all something for the credit side of things, not the debit. Ditto the two most recent works of Andreas Prochaska, In 3 Tagen bist du tot 2 (Dead in 3 Days 2, 2008) and Der erste Tag (2008): The former is a sequel to his mighty successful Upper Austria-slice’n’dice-fest In drei Tagen bist du tot (Dead in 3 Days, 2006), set in Tyrolia this time and played more in the key of early Hooper than Cunningham eternal; the latter is a made-for-TV atomic apocalypse scenario with deft Science Fiction-touches. Both films, it’s true, do have their fair share of hiccups: In drei Tagen bist du tot 2 is a tad too convoluted and in too many scenes lacking in spatial orientation (an all too common short-coming these days in action and horror movies, it’s true…) while Der erste Tag might have fared better with a bit more realism and a little less genre. That said, genre is the key-word here – Prochaska definitely has a knack for it, and in the old-school way at that; above all, he’s developing an ever finer sense of how to make his highly Hollywoody stories work in a regional setting. Which is a good thing to have around for every smaller film culture: someone who can make the international work locally in a way that’s interesting to watch for the rest of the world. 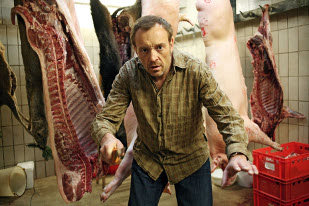 A director who knows how to deliver in that particular field is Wolfgang Murnberger, one of Austrian cinema’s somewhat more awkward cases. In the early ‘90s, he was the next big thing to happen, yet after Ich gelobe (I Promise, 1994), he somewhat lost his way – well, okay, not quite: he has a family with by now something like half a dozen kids, a state of things that makes a man make movies he’s not really interested in, usually for TV (and, man, did he do a few things he really should be ashamed of…). Anyway, in 2000 Murnberger hit pay-dirt with Komm, süßer Tod (Come Sweet Death), his first of by now three off-beat crime movies based on novels by Wolf Haas featuring an ex-cop called Brenner, always played with balls ’n brio by mighty Josef Hader. The latest, Der Knochenmann (The Bone Man, 2008), was among the Diagonale’s highlights. Brenner is now in the repo business, reluctantly. When his best friend and boss asks him to get a car somewhere in the boondocks, he stumbles into… something strange involving: Russian and Serbian men of respect and sometimes bizarre ways of getting to the heart of the matter; a jolly Bavarian bastard and hotel owner with a bone-crunching machine in the cellar and a weak spot for a charming hooker in Slovakia; said man’s sad case of a son who’s a wanker, and a pitiful one at that; said son’s wife who’s way too full of life for him but seems like just the right kind of gal for under-loved and -fucked Brenner; and, finally, a transsexual Brenner’s mate find himself in love with, suddenly, at the end; okay, let’s also add the disco owner who’s in only two scenes but is played by opaque beauty (and über-underachiever as a director) Kathrin Resetarits in her very own inimitable fashion, adding yet another facet of star genius to an already stunning cast featuring fearless Birgit Minichmayr, ever adventurous Pia Hierzegger, and a once again monumental Josef Bierbichler. And Murnberger certainly knows how to do right by his extraordinary actors and their idiosyncracies – just wonder at Bierbichler and Hader’s duel of wits played out as a clash of cultures of cool, Bavarian vs. Austrian; same way he knows how to make a plot work where romantic melodrama meets self-consciously trashy horror-pastiche while the frivolous and the funny and the whacky and the zany become ever less distinguishable from one another the more things progress. Call it a crime movie as Austrian as it’ll ever get.

And there was still more bounty to be had in Graz, much more. Let’s just mention in passing: Michael Pilz’s sensual excursion in the borderlands of light, Yemen Travelogue. Days at Shibam and Seiyun (2008/9); Bernhard Braunstein and David Gross’ head-long plunge into a world of hurt apart, Pharao Bipolar (2009), an uncompromising portrait of Werner Ludvig Buchmayer, an artist living with bipolar disorder; Constantin Wulff’s splendid portrait of a maternity clinic, In die Welt (Into the World, 2008), done in the style of Frederick Wiseman; Gustav Deutsch’s disillusioned essay on emancipation and all the ways it was and is still failed by society, FILM IST. a girl & a gun (2009), a film drama in five parts depicting the battle of the sexes, made with appropriated footage from four and a half decades of film history, all set to the lines of Hesiod, Sappho and Platon; Josef Dabernig’s moving still life Hotel Roccalba (2008), which is as much a genuine family portrait as a wryly ironic meditation on holiday rituals; ever underrated Thomas Steiner’s Cervinara (2008), an accidental companion piece to the former in the way it deconstructs the self-same italianità Dabernig’s work is haunted by; and finally Nikolaus Geyrhalter’s 7915 Km (2008), a lesser work for him, it’s true, but still a fascinating attempt to create a vision of the lives and landscapes both real and spiritual the Ralley Paris-Dakar passes by.

And yes, there were even a few masterpieces. One by Harun Farocki who after years of working with video had finally made something in 16mm again: Zum Vergleich (By Comparison, 2009) – 61 minutes of education and enlightenment. Moving from continent to continent and culture to culture, Farocki re-creates the history of the brick, and its development. First there’s one brick, then there are two bricks in one mould (simplification of the work process), then there’s the slicing of bricks from a preformed chunk of clay (speedification of the process), etc. About halfway through, when the brick has reached its for now most advanced form, the film starts to consider alternatives to the classical way of building houses ie. the use of bricks. It all ends in an art cum research project: a robot translates pixels into a brick wall. All that without any voiceover – beautifully sparse inter-titles only say what needs to be said, putting occasionally an unexpected edge or twist to things. 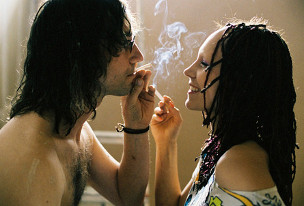 Two more masterpieces, works of sheer genius so far above the rest it hurts, and simply the finest films the festival had to offer, came courtesy of Michael Glawogger: Contact High (2008) and Das Vaterspiel (Kill Daddy Goodnight, 2009) – a philosophical head-trip fusing Louis de Funès with Hunter S. Thompson and Cheech & Chong with Kurt Vonnegut, and a coolly detached meditation-in-motion on guilt, individual as well as collective, by way of a variation on the myth of Edipus. Das Vaterspiel became a triumph – Contact High left many dumb-founded, flabber-gasted, clueless. Few, it seems, noticed that both films essentially ask the same question: what is the reality I’m in? True enough, asking that is like kicking away the clay feet on which rests too much of contemporary film culture, obsessed as it with somewhat crude ideas of “authenticity” and “realness”… How reassuring and easy to pigeonhole Das Vaterspiel looked with its Nazi-plotline, politically disturbing and aesthetically experimental as it is – but how do you react to something like Contact High, a work like little else in film history, best described as a kind-hearted and generous avant-garde entertainment done in the reefer vision-variety of magic realism? Seems that it’s easier to live with a reality made of fear and loathing than one of brotherly love and the realisation of all our desires. And hark!, that both are but the same with faces painted differently, Michael Glawogger’s next film, Whores’ Glory, will surely show… Come next Diagonale, or the one after.