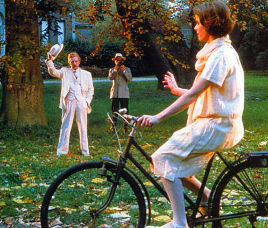 It isn’t life, but its shadow, it isn’t movement, but its silent ghost.… This, too, is a train of shadows.

José Luis Guerín’s fourth feature-length film, Tren de sombras, is, like so much of the Spanish director’s work, a challenging and mesmerising hybrid – part genre piece, part structuralist experiment, part city symphony. The film is built on a provocative premise: Seventy years after the unexplained death of Gérard Fleury, a Parisian attorney, family man, and amateur filmmaker, several reels of his home movies have been unearthed, and someone, the unnamed author of the film we are watching, sets out to restore and recreate them, thereby embarking on an investigation into this long-forgotten mystery. That synopsis, however, paints a misleading portrait of Tren de Sombras, which is more concerned with the texture of images and the fickle nature of memory than with gumshoe detecting or intrigue. To borrow from late-20th century critical parlance, this is art about art, a film about film. Much to his credit, Guerín, as he’s proven throughout his career, is among the handful of directors today who possess the wit, poetry, intellectual rigour, and technical command of the medium necessary to transcend cliché and reinvigorate discussions about the relationship between image-making and meaning-making in our post-Matrix, pop philosophy discourse.

Tren de sombras begs comparisons with Michelangelo Antonioni’s Blow Up (1966) and also, I suppose, with all the other narrative films that followed suit by revolving their plots around some formal aspect of the cinema (mise en scène, editing, sound design, etc.), thus foregrounding it in a self-reflexive, self-critical, and, one might cautiously add, postmodern way. Films like Blow Up, The Conversation (Francis Ford Coppola, 1974), Blow Out (Brian De Palma, 1981) and, more recently, the work of Michael Haneke (Code inconnu [2000] and Caché [2005], transform filmic materials into forensic artefacts, physical evidence to be meticulously examined and deconstructed. Attention to form is the hallmark of Guerín’s cinema, as demonstrated clearly in his latest films, the companion pieces Unas fotos en la ciudad de Sylvia and En la ciudad de Sylvia/In the City of Sylvia (both 2007). The former is a silent, autobiographical, essay film constructed mostly of still, black-and-white, documentary photographs that harkens back not so much to Chris Marker, who famously used a similar technique in La Jetée (1962), but to Eadweard Muybridge and other 19th century innovators of the “moving image”. In Unas fotos, Guerín wanders the streets of Strasbourg, chasing the ghost of a woman he met there more than twenty years earlier. Each photograph reconstructs and, in a sense, supplants a particular memory, transforming it, like one of Muybridge’s horses, into a single, extended frame in Guerín’s slow-moving picture. En la ciudad de Sylvia is a more traditional narrative film, shot in colour 16mm and blown up to 35mm, but it’s no less concerned with form. Here, Guerín again re-enacts his search for lost love in the streets of Strasbourg. However, the act is now made multivalent – curious, humane, nostalgic, voyeuristic – not unlike cinematic spectatorship in general.

Likewise, the very subject of Tren de sombras allows Guerín to explore, both literally and metaphorically, the meaning of images. In Fleury’s footage, we see his extended family at their large home near the village of Le Thuit in Normandy, relaxing as if on holiday. They hike to a site overlooking a lake and picnic there. The children ride bicycles, play with dogs, and perform magic tricks. On several occasions the family poses for portraits. It’s only in the second half of Tren de sombras, after the author of the film begins to re-sequence shots, blow-up images in order to reveal lost details, and freeze particular frames, that we begin to detect something amiss among the Fleury clan. As in Antonioni’s film, there’s a fetishistic thrill to watching the clues become revealed through real, mechanical processes. Gérard Fleury rarely steps out from behind his hand-held camera, so nearly all that we witness in the old footage is from his first-person point-of-view (it’s similar to Unas fotos in that respect). The “author” first becomes fascinated by and suspicious of Fleury’s sister-in-law and pays particular attention to two shots of her, one on a swing, the other in a passing car. The author rewinds those shots, slows them to half speed, juxtaposes them in a split-screen, enlarges her face, and freezes the frames in which her eyes make direct contact with the camera (and by analogy with Fleury). What shared secrets are revealed in that glance? The mystery appears to be on the verge of revelation.

Guerín, however, pushes the experiment even further than Antonioni, veering out of narrative filmmaking altogether and toward the truly avant-garde. To say that Guerín is fascinated by the texture of film is a literal truth. Near the end of Tren de sombras, the author’s use of Fleury’s footage becomes more playful, the pace of the jump-cuts more frantic, and the relationship between images more unpredictable and fractured. In a word, everything begins to disintegrate – the Fleury family relationships (or our tentative understanding of them, at least), the satisfying order the author had briefly conjured with his editing, and the literal, physical record of what we are studying – that is, the film itself. In Tren de sombras’ most compelling sequence, Guerín moves into pure abstraction, finding a Stan Brakhage-like beauty in the scratched and disintegrated material of the found footage. It’s a fascinating modernist turn for Guerín, a kind of escape from chaos into the aesthetic realm. In this sense, Tren de sombras would be at home programmed alongside the work of contemporary avant-garde filmmakers such as Jennifer Reeves, Martin Arnold, Peter Tscherkassky, and David Gatten.

Like Guerín’s return to Strasbourg decades after his first encounter with Sylvia, Tren de sombras is also structured around a return to the scene of the crime: the village of Le Thuit and the estate where Fleury’s footage was shot. The author brings with him actors in period costumes and recreates scenes from the decayed home movies. He reverses angles, finding new clues and new shared glances. But even more interesting are the contemporary shots that seem totally unmotivated by the through-line of the plot. Again with one foot in the avant-garde, Guerín devotes considerable screen time to images of abstract beauty found among the prosaic. Several shots from a long sequence that takes place in the old home at night during a rainstorm would not be out of place in a Nathaniel Dorsky or Jim Jennings film. And one image in particular, the light cast by a passing car moving slowly along an interior wall, not only returns multiple times in Tren de sombres but also in the opening moments of En la ciudad de Sylvia, evidence that Guerín is still haunted by a train of shadows.