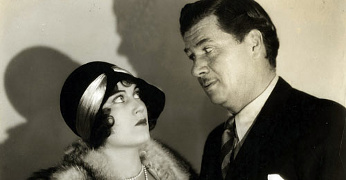 Claire Johnston began her 1970 review of the British 16mm release of Thunderbolt with a sentence still relevant today:

Josef von Sternberg has suffered perhaps more than any other director from the vagaries of film criticism; on the one hand he has been seen as a mannered, self-indulgent stylist with a trivial and dehumanized vision of the world, and on the other as a cult figure largely associated with the mystique of Marlene Dietrich, with whom he made seven films, beginning in The Blue Angel in 1930 and ending with The Devil is a Woman in 1935. (1)

Writing a few months after the director’s death, she praises Andrew Sarris for re-evaluating the non-Dietrich films but added that further reassessment suffers from the vagaries of distribution especially concerning access to the director’s first sound film then released on 16mm. Despite Gaylyn Studlar’s examination of the von Sternberg-Dietrich collaboration, few detailed explorations exist of the director’s other films (2). Good copies of Thunderbolt can be found only in the U.C.L.A. and M.O.M.A archives, while poor quality bootleg copies circulate on DVD and VHS. The silent version, made for general release in cinemas not equipped for sound, is unobtainable (3).

Thunderbolt is a sound film displaying creative use of a form that would later find its artistic culmination in The Saga of Anatahan (1953). It is meant to be both seen and heard, with two key components of the cinematic apparatus operating in a deliberately composed complementary and contrapuntal juxtaposition. Thunderbolt appeared at a time when directors worried about how the introduction of sound would affect developments in visual technique. Several believed that this new technology could be used innovatively. Although Eisenstein, Hitchcock, von Sternberg and Vertov may not have known of each other’s particular concerns, they all wished to avoid oppressive forms of theatrically-influenced dialogue in film. All took different routes to solve this problem (4). Thunderbolt is caught within this contemporary cultural dilemma, a technological and aesthetic shift that instigated various solutions and innovations across international cinema including Hitchcock’s sound version of Blackmail (1929) and Vertov’s Enthusiasm (1930). As a von Sternberg film, Thunderbolt engages in its own type of solution in a highly creative manner.

Von Sternberg regarded the arrival of sound technology as challenging. He also saw it as another way to stimulate audience imagination: “To be correctly and effectively used, sound had to bring to the image a quality other than what the lens included, a quality out of the range of the image. Sound had to counterpoint or compensate the image, add to it – not subtract from it.” (5) His attempt to put sound in its appropriate relationship to the image remained unnoticed except by his fellow director Ludwig Berger who congratulated von Sternberg on making “the first rounded out and artistically elaborated sound film” (6). Thunderbolt does have its share of stilted dialogue and problems associated with the new technology. But these minor flaws should not prevent modern viewers from appreciating the innovative nature of the creative solutions von Sternberg used for this new form (7).

Ron Mottram has noted Thunderbolt’s use of asynchronous sound (8). But the film also employs a distinctive combination of sound and vision, engaging in ironic commentary during certain sequences, This combination not only foreshadows what will occur in the second part of the film on Death Row but also implicitly satirises the generic concept of the noble gangster George Bancroft personified in his earlier role as Bull Weed in Underworld (1927). The Harlem Black Cat nightclub sequence follows a romantic meeting between Ritzy (Fay Wray) and Bob (Richard Arlen) on a park bench that is introduced by the camera following the path of a black cat that evokes memories of the feline in Underworld. When later questioned by a police inspector, Ritzy sits on an elevated chair reminiscent of a witness stand surrounded by cops acting as judge, jury and executioners eager to railroad Bob and foreshadowing what they and Thunderbolt will later do to him. The black cat operates as a predetermined symbol of foreboding.

As Thunderbolt and Ritzy enter the Black Cat, an 80-second long take begins by framing them both in a diagonally tilted spider frame above the orchestra paralleling the similarly slanted nightclub sign outside that has an ominous shadow of tree branches in the background. Thunderbolt pauses briefly in the centre of the web before descending the stairs. As the waiter greets him, we hear the music of the black orchestra in the background. But it is not reduced so that we can hear the dialogue as in a later Hollywood film. It acts in unity with the dialogue. A waiter and Ritzy walk towards the camera and exit screen left. The camera tracks back as Thunderbolt walks to his table passing others on his right. As he does so, off-screen voices comment on his presence. They expect trouble. Usually such voices would come from the tables he passes. But they do not. Instead, as Thunderbolt joins Ritzy at their table placed before a black female chorus line, the scene cuts to two black customers looking on seated in an area whose actual location is indeterminate. A mixture of sounds occurs involving the band, raucous off-screen laughter, and off-screen dialogue that operates in very much the manner of a chorus. Dialogue, movement, and mise en scène occur in complementary and contrapuntal ways violating future rules of the Classical Hollywood studio system. After the chorus line finishes, the image cuts again to the two black customers. One of them now speaks and we readily identify him as the source of the previous off-screen remarks.

Following a violent incident leading to the cessation of the music, entertainment resumes with a black torch singer singing a blues song, “Daddy Won’t You Please Come Home”, the lines articulating later feelings of romantic despair Thunderbolt and Ritzy will later experience. The nightclub sequence ends with the police raiding the club armed with Tommy-guns, appearing little different from the gangsters they seek. As the lights go off, the police appear in the entrance lit in German Expressionist/pre-film noir lighting. But Thunderbolt escapes off-screen. The off-screen sound techniques used in the Black Cat nightclub scenes anticipate those later used in the Death Row sequence.

Thunderbolt also uses sound expressionistically whether it originates from the sewing machine of a mother (Eugenie Besserer), worried about a son fired from his bank job due to police pressure, or the sinister squeaking sounds from a dog’s cat ball toy that Thunderbolt squeezes in his last hours on Death Row as he considers his revenge on Bob. When Thunderbolt hits someone in The Black Cat, a drum roll accompanies their slide to the floor. A crashing cymbal instantly synchronises with the final fall as the victim reaches the floor. Although Part Two naturally lacks the impressive camera mobility of Part One’s nightclub sequence, the limitation of space does not prevent the appearance of innovative sound techniques complementing those heard earlier. Both Parts complement and counterpoint each other.

Thunderbolt has suffered neglect in comparison to Underworld. Both films share common features such as the noble gangster dying for his friends and due to his kindness to animals: Bull Weed gives milk to a kitten while Thunderbolt befriends a dog that leads to his capture. But Thunderbolt undermines superficial sentimentalities derived from the earlier film by emphasising comic undertones such as the eponymous character playing doggy games before he attempts to murder Bob. Death Row is really a vaudeville venue with Thunderbolt teaching his pet dog to “play dead” before his execution (9). But sentimentality may actually conceal deep masochistic desires. This will not be the last occasion von Sternberg subverts genre conventions, utilising a particular type of masochistic performance technique he also mentions in his autobiography (10).

Before Thunderbolt’s arrival on Death Row, a black inmate plays the piano, singing “Roll Jordan Roll”, ironically evoking The Black Cat nightclub entertainment we have seen in front of a bored prison guard. Tully Marshall’s Warden operates more like a stand-up comedian than a sober official of the law. He compares Death Row to the Ritz and urges his temporary residents to take care of themselves and not catch pneumonia! Although he wishes that the off-screen barbershop quartet serenading his guests would disappear, as soon as a tenor goes to execution another vocalist takes his place. Thunderbolt sits on a chair in his cell that ominously creaks under his weight. Irish comic humour occurs intermittently and a quartet sings “Rock a Bye Baby” after Thunderbolt slugs an uncooperative prisoner, while “Take Me Out to the Ball Game” ominously foreshadows the last mile. An unseen group sings the melodramatic “Broken-Hearted”, whose lines involving an “old pal” getting a friend’s “old gal” counterpoint not only the sentimental overtones of the film’s romantic triangle but also The Black Cat entertainer who mournfully sings about romantic abandonment. Such scenes show von Sternberg enjoying his own version of Fun in a Chinese Laundry and subverting those sentimental motifs associated with Underworld, his autobiography’s title significantly deriving from a forgotten Edison film. Thunderbolt reveals von Sternberg having fun with new techniques of sound cinema in a serious and subversive manner creatively different from the type of cinematic fun enjoyed by Howard Hawks.