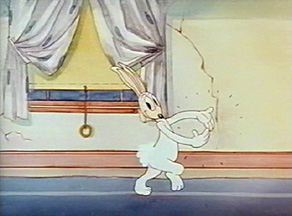 Language is not something we think much about when we consider Walt Disney’s animated films, but it is one of the most active and interesting aspects of the work produced by Warner Brothers animators (including Tex Avery and Bob Clampett after they left Warners), each of the director/unit leaders specialising in different linguistic angles – syntax, vocabulary, puns, dialogue, contradictions, delivery, dialect, unreliability and irrationality, character construction and differentiation, and physicality and plasticity of words. Chuck Jones is second to none of his colleagues in language virtuosity, but alone among them he frequently made films with no dialogue, most famously his Road Runner and Coyote series (these films are not silent, of course: they have music, sound effects, and often the written word). The absence of dialogue lets Jones concentrate on taking characterisation as far as he can with drawing, movement, rhythm and pace, action, and reaction. Caveman Inki and Prest-O Change-O are good examples of this part of Jones’ work.

The two films also fall between series and one-off cartoons. There are two types of one-offs in Jones’ work. The first are built so tightly around a central idea (One Froggy Evening, Much Ado About Nutting, Duck Amuck, What’s Opera, Doc?) that the film exhausts it, leaving no room or reason for sequel or series. The second sort of one-off are auditions for potential series characters. Prest-O Change-O is the second in a 1939 Jones mini-series about a pair of dogs who have adventures in strange places (the first, Dog Gone Modern, is set in a super-modern home full of gadgets; the last, Curious Puppy, in a disused amusement park). In 1943, the dog protagonists would mutate into the two gabby mice Hubie and Bertie in The Aristo Cat; they would become occasional players for the next several years. Inki, the boy caveman/black jungle dweller debuted in 1939 – The Little Lion Hunter – and returned as Inki and the Lion (1941), Inki and the Mynah Bird (1943), and Inki at the Circus (1947). After Caveman Inki, political correctness set in. Both Prest-O Change-O and Caveman Inki stand as reminders of the wealth of occasional supporting characters Jones spun off behind and in addition to the studio’s star franchises (Bugs, Daffy, Porky, Sylvester, etc).

Finally, both films involve characters with magical powers – an interesting challenge to Jones and his logical, syllogistic approach to his cartoon worlds.

Prest-O Change-O begins with a familiar set-up, but a bit of a red herring: the Dog Catcher is chasing a pair of dogs who take refuge in the house of Sham-Fu the Magician. The house is full of booby traps and tricks from the start. The two dogs are separated from the outset: the older, bigger dog is paired off against a very slippery magician’s rabbit; the younger pup is beset by a Hindu rope trick rope with a mind of its own – the situation provides the ideas for the mechanism of the sequence of gags, based on the illusions of a stage magician: things appear, disappear, transform, and substitute for each other in unexpected and inexplicable ways.

The rabbit who afflicts the big dog is another of many proto-Bugs Bunny studies – mute, strutting and twitting, a troublemaker (in this same year, Bugs Bunny would formally be named in a cartoon: Ben ‘Bugs’ Hardaway and Cal Dalton’s Hare-um Scare-um). In this case, the rabbit is able to do all manner of magic tricks, disappearing into itself and other objects, and more. The Hindu rope and the pup are a bit better matched, able to startle each other from time to time. Finally, the dogs reverse the situation and the film ends with a strange image of the rabbit serving as both a pole lamp and goldfish bowl toy.

Jones’ lifelong interest in observing and portraying the behaviour, movement, and actions of different sorts of animals is strongly displayed in his rendering of the dogs’ responses to events. Also worth noting is the 1930s rounded, tubular, oval, soft and bouncy figure drawing – quite a contrast to the style of Caveman Inki. 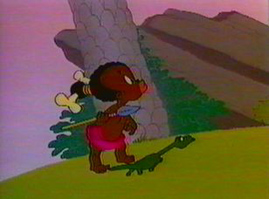 By 1950, Caveman Inki clearly shows shifts in drawing, graphic, and colour ideas from 1939’s flat backgrounds and simplified presentation. The film opens with Phil DeGuard’s busy, very stylised backgrounds in splashy, expressionist fields of colour and texture and a dramatic presentation of prehistoric predators Fantasia-style, a world red in tooth and claw. Inki, a small boy with a desire to be a hunter with a spear and a small dinosaur as a pointer dog disturbs the peace of the animals around him (but doesn’t harm them). He attracts the attention of a lion cub (oddly drawn and animated as a pup-dog) who stalks him, and a real lion who threatens him. Suddenly, in the most spectacular scene in the film, a mountain trembles, spasms, begins to tear apart, and splits down the middle: out walks the proximate cause, a small, dour toucan-like bird: the Mynah. The Mynah is the film’s meneur de jeu: although he is oblivious to them, the other characters in the film seem compelled to follow him in a game of follow-the-leader mixed with the old “walk this way” gag: the Mynah’s music is a snatch from Mendelssohn’s Fingal’s Cave overture, with a hitch/hop every sixth step: this is contagious for the followers.

The Mynah is the magical character, the one whose powers are different from the other characters. Some of this has to do with Jones’ use of off-screen space to build to a joke climax (a huge dinosaur pursues the Mynah behind a hill; all we can see is dust, vibration, crashing sounds, then silence. Beat. Beat. The Mynah bird walks into frame impassive as always; cut to a shot behind the hill showing the brontosaurus tied with its arms and legs into a knot a sailor would be proud of), or to set precise rhythms (the pans isolating first the Mynah, then each of the characters following him, in their own frames). Also worth noting are the mountain side chases and snare trap gimmick which lead into the Road Runner series, just starting in 1950.

Bibliographic note: Chuck Jones was known among his colleagues as an intellectual, not because he read Freud and Sartre but because he articulated things about animation that other animators knew intuitively; and because he spent a lot of time and energy trying to figure out how and why things worked in animation (like all the American studio animators I met, Jones had a comprehensive knowledge of the history of animated film). These qualities suffuse his two books: Chuck Amuck: The Life and Times of an Animated Cartoonist (Farrar Straus Giroux, New York, 1989) and Chuck Redux: Drawing from the Fun Side of Life (Warner Books, New York, 1996). The long interview “Chuck Jones” in Film Comment 11.1 (January-February 1975) pp. 21 – 38, is also very instructive.