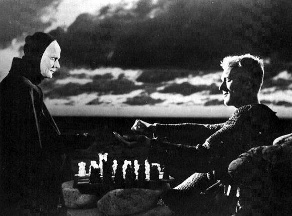 Jöns: “Do they really expect modern people to take that drivel seriously?”

– from The Seventh Seal

The truth is I am forever living in my childhood.

The Seventh Seal was not the first Ingmar Bergman film to imagine death. I don’t mean the murders, accidents, suicides, diseases, abortions and protracted dying that cloud his previous films, and gave him the reputation for Scandinavian doom and gloom he retains today. Before Bengt Ekerot applied the ghastly white make-up – half-clown, half-skull (3) – and was draped in the black cowl that darkens the entire frame as, arm outstretched, he approaches his victim in The Seventh Seal, Bergman had personified death in the short “silent comedy” Thomas (Birger Malmsten) and Birgitta Carolina (Doris Svedlund) watch in the attic during Prison (Fängelse, 1949), where he is a burlesque figure, scrapping with the devil and a thief. In Summer Interlude (Sommarlek, 1951), an old woman, with face and black outfit strikingly similar to Ekerot’s Death, passes the heroine in a symbolically bleak landscape; later a dying woman described as a “ghost” and a “corpse” plays chess with a priest. In Dreams (Kvinnodröm, 1955), a skeleton lunges from the House of Horrors. Even the film Bergman directed immediately prior to The Seventh Seal, Smiles of a Summer Night (Sommarnattens leende, 1955), opens with figurines on a clock, including Death as a skeletal Grim Reaper. The different moods these representations evoke – comic as well as tragic – should be taken into account before approaching The Seventh Seal too reverently – or, as is more often the case, irreverently.

Viewers of The Seventh Seal tend to take it at face value, and assume that the Crusader Antonius Blok’s (Max Von Sydow) quest in the film – to discover the existence or otherwise of God, and the value or meaning of human activity – is also Bergman’s in making it. For example, Robin Wood calls von Sydow’s Blok Bergman’s “mouthpiece” (4). This has led many to over-emphasise its “metaphysical” aspect (5), while others dismiss it for this very reason, in particular admirers of Bergman’s other work, who often see The Seventh Seal as obscure, “cold” and too deliberate (6). Bergman himself had mixed feelings towards the film throughout his life, unwilling to discuss it with James Baldwin in 1960 (7), yet declaring in Images: My Life in Film (1990) that it “is one of the few films really close to my heart” (8).

It’s worth considering the two identifiable origins of the film, both of which Bergman has discussed throughout his career. The first is his experience as an impressionable child with a “grim fear of death” (9), visiting Swedish chapels with his pastor father, and marvelling at the vivid frescoes that adorned their medieval walls. One mural painted on an arch purportedly served as the basis for The Seventh Seal, illustrating:

Death, playing chess with the Crusader. Clutching the branch of a tree was a naked man with staring eyes, while down below stood Death, sawing away to his heart’s content. Across gentle hills Death led the final dance toward the dark lands.

But in the other arch the Holy Virgin was walking in a rosegarden, supporting the Child’s faltering steps, and her hands were those of a peasant woman. (10)

The second and then more recent source was a training play Bergman wrote called Trämålning (1954; variously translated as A Medieval Fresco, Wood-painting and A Painting in Wood), created for “youngsters” he was teaching in Malmö Theatre School, which featured most of the situations and characters in The Seventh Seal (11).

As these origins suggest, the film’s real power is didactic (12), but not in the sense of teaching us how to think or live ethically or metaphysically, or even how to cope with the atomic age (13). It teaches us to see anew, with the faith, innocence and wonder of the believer or child, like the “young urchins” Bergman remembers jostling to watch him shoot the execution sequence (14). I mentioned earlier the silent comedy with a caricatured Death in Prison; this was shown on a rickety projector given to the hero by his aunt as a childhood gift, the very one Bergman remembered from his formative years in his autobiography The Magic Lantern (15), and thus linking the miracle of sight or vision to childhood and death. What people generally admire about The Seventh Seal is not its ideas but its graphic power, the monumentality of its images, its sense of being a medieval woodcut brought life: stylised figures carved from the “wood” of black-and-white film. Bergman encourages us to feel the terror, bewilderment and joy comparable images inspired in medieval worshippers and his younger self, without necessarily worrying about the ideology behind them (16). This appeal to the childlike might sound sentimental, but it is as radical as the early Wordsworth, an attempt to “drive a wedge into people’s indifference or passivity” (17).

This might explain Bergman’s somewhat surprising identification with the naïve, simple-minded, “holy” (18) clown Jof (Nils Poppe), rather than the anguished thinker Blok, or his squire, disillusioned realist Jöns (Gunnar Björnstrand) – both played by actors who have often incarnated aspects of the director’s alter ego. Jof is one of the film’s many artist figures; these include his fellow players Mia (Bibi Andersson) and Skat (Erik Strandmark) (19); the painter (Gunnar Olsson), whose mural of plague and Death the film can be said to illustrate (20). Even Jöns sings, and both he and Blok have composed songs in the past. On a wider, societal level, both religion and state stage their barbarous actions as theatrical rites, whether it’s the procession of flagellants gaped at by an awed crowd, or the execution of the “witch” watched by soldiers and itinerants. In this way, the film is not so much about death as the way people deal with, structure, or imagine death.

Unlike these, Jof has the two kinds of experience Bergman asserts as characteristic of the artist. Like the young Bergman (21), he has visions beyond everyday perception (and unlike the single-minded, obsessive, rather callous Blok, he has both dark and bright apparitions [22]). Part of his job is to communicate these visions into comprehensible form to the less perceptive, in this case his wife Mia. Her loving incredulity, however, anticipates the second, more agonising fate of the artist – having to suffer a public unwilling to tolerate visionary experience, to which it responds with either indifference or hostility. Jof faces the first when the players are ridiculed during their open-air performance; but the second powers the film’s most distressing sequence, when he is forced to perform as a baited bear on an inn table to the rhythm of drinking cups clattered by a mob who seem likely to kill him. Bergman would continue to explore this dual aspect of the artist – as privileged seer and social outcast – in films like The Face (Ansiktet, 1958; in some ways a reconstitution of The Seventh Seal, with Ekerot as a dying actor seeking help from bogus miracle worker von Sydow, Björnstrand as an eloquent materialist, and a group of actors victimised by society, in this case its leaders [23]), The Hour of the Wolf (Vargtimmen, 1968) and The Rite (Riten, 1969).