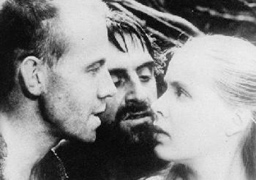 It is strange to think that The Virgin Spring – a Best Foreign Language Oscar winner from 1960 directed by Ingmar Bergman – would be indirectly responsible for starting the career of American horror filmmaker Wes Craven. Although this may sound like an unlikely claim, The Virgin Spring was an influence on Craven’s directorial debut, the notorious 1972 shocker The Last House on the Left. In fact, some people may only be aware of The Virgin Spring through its association with Craven’s film. Superficially at least, both films deal with a similar incident; the brutal rape and murder of innocent girls and the subsequent retribution that is meted out to the perpetrators by the girls’ family. However, the two directors’ approach to the material is extremely different.

While The Virgin Spring is regarded by many cineastes as a serious, thoughtful, intellectual film, made by a notable art-house auteur, Craven’s version of roughly the same story has been labelled by some people as a crude copy of a far superior work. While discussion of the merits of Craven’s film continue to be debated, The Virgin Spring seems to have been reduced to an interesting piece of film trivia; a ”world cinema” film that is perhaps chiefly known as providing the inspiration for a more widely known American version of the same story. Just as Akira Kurosawa’s The Hidden Fortress (1958) is often discussed as being an influence on George Lucas’ Star Wars (1977), and less often talked about as a film in its own right, so The Virgin Spring is often only mentioned in relation to The Last House on the Left.

Whether you admire or loathe The Last House on the Left, it does attempt to reflect the liberated youth culture and loss of innocence in the United States at the time, when the 1960s counter-culture’s dream of peace and love began to fade. In the 1970s, the feeling of optimism was dulled after events like the horrific late 1969 killings related to Charles Manson and the continuing cataclysm of the Vietnam War. The appalling violence meted out to the two girls in Craven’s film seems to mirror the horrors and turmoil of the time. In contrast, The Virgin Spring is set in medieval times and its concerns are primarily religious, rather than political or social. Bergman’s film stars Max von Sydow, who is often seen as the director’s archetypal male protagonist and surrogate, largely because of his iconic role in his earlier film, The Seventh Seal (1957). Although von Sydow’s presence dominates the film (particularly in its latter stages), it is arguably Ingeri (Gunnel Lindblom) who is the film’s main character and whose vindictive behaviour against her stepsister, Karin (Birgitta Petersson), sets in motion the subsequent acts of horror.

The Virgin Spring begins with Karin and Ingeri being sent on a journey to church by their mother (Birgitta Valberg) and father (von Sydow), who are very strict Christians. Ingeri is jealous of all the attention lavished on the spoilt but innocent Karin and tricks her naïve stepsister into continuing the journey to church alone. Karin soon meets two herdsmen (Axel Düberg and Tor Isedal) and a boy (Ove Porath), and offers to share a meal with them. However, events quickly take a horrific turn as the two herdsmen, watched by the boy, viciously rape and murder her. The herdsmen and the boy flee the scene and are later shown being given food and shelter by Karin’s father at his home. At this point, the father does not yet know about Karin’s fate and the herdsmen are unaware that the girl was his daughter. However, the mother soon discovers that the herdsmen have her daughter’s blood-stained clothes in their possession, and when the father is told of this, he exacts a terrible revenge.

Bergman’s films are characterised by their serious and contemplative tone, measured pace, and formal technique. These characteristics are often used by filmmakers to distance the viewer from the drama on screen and allow them to examine events objectively, but here they serve to render the horrific events in the film even more realistic and shocking. In this case, Bergman’s realistic presentation of events and his portrayal of the family as “ordinary” people, suggests that he wants to pull us into the unfolding drama, not keep us safely away from it. Throughout the film, we share the viewpoint – and are made to identify with – various characters, including the boy who accompanies the two herdsmen. At one point, we observe as Ingeri hides and watches Karin get assaulted and killed by the herdsmen, but does nothing to try and prevent it. Although we do not witness these events strictly from Ingeri’s point-of-view, we still identify with her just as much as we do Karin in this scene. We spend more time with Ingeri than we do with Karin in the film (it opens with Ingeri on her own and there are a number of scenes where she is the focus) and so we understand what she is thinking and feeling, and possibly identify with her more than any other character.

Images of nature, such as earth, water and fire, recur throughout the film. This may reflect the beauty and purity of the rural environment, but it also suggests that nature can be primal, violent and dangerous. A shock cut to a crow crying out as Karin and Ingeri approach the forest on their journey alerts us, in no uncertain terms, that something terrible awaits the characters if they venture any further, and the frog that Karin hides in Karin’s bread as a spiteful gesture looks like an act of witchcraft. The violent rape and murder of Karin, along with the subsequent brutal retribution that is meted out to her attackers by her father, are staged with virtually no any dialogue. We can only watch as these terrible events are played out before us in near silence and ask, as the father will later do, why God has permitted such a terrible thing to happen to his daughter.

Throughout the film, the mother and father have maintained a staunch belief in God, but the bleak events of the film force the father to question his faith, a dilemma that dominates many Bergman films. As well as the father voicing doubts about his beliefs, the mother and Ingeri also express the guilt and responsibility that they feel concerning Karin’s death. When a sign of hope – and the possibility of redemption – is finally presented to the family, it may strike some as an uncharacteristically optimistic ending for a Bergman film and a surprisingly “fantastic” element to appear in a film that has hitherto maintained a largely realistic tone. The “virgin spring” that magically appears may be a sign that God has acknowledged the father’s offer of penance for exacting his revenge on the herdsmen, but the father’s murderous act of vengeance and Ingeri’s failure to help Karin are sins that will haunt them for the rest of their lives.

Although The Virgin Spring is centred around a horrifying act of violence, the film is still a thoughtful and moving work, beautifully shot by Sven Nykvist, who would go on to become one of Bergman’s key collaborators. The film’s violence is still shocking to watch, despite the fact that it is not overtly graphic. This is in stark contrast to The Last House on the Left, which opted to push the boundaries of how realistically sex and violence could be depicted on screen, and showed images of extreme violence and sadism that many people found – and still find – distasteful and unacceptable. Although The Virgin Spring influenced Craven’s film, rape/revenge stories were also depicted in numerous US films during the 1970s. These include such so-called exploitation titles as The Last House on the Left and I Spit on Your Grave (Meir Zarchi, 1978), both of which focus on the rape of women and the revenge that is dealt out to the rapists. Other films of the period feature it as plot strand within a broader narrative. Films that fall into this category include Stanley Kubrick’s A Clockwork Orange (1971) – which sees the intellectual played by Patrick Magee (who was crippled and whose wife was raped by Malcolm McDowell’s vicious protagonist) take revenge on his tormentor, who has, by a quirk of fate, ended up in the home of the man whose life he ruined – and Sam Peckinpah’s Straw Dogs (1971) – where Dustin Hoffman’s protagonist wages a private war against a gang of local villagers who have repeatedly tormented and threatened him and, in an event unseen by and seemingly unknown to him, brutally raped his wife.

These shocking films, along with The Virgin Spring, find their modern equivalent in Irreversible (Gaspar Noé, 2002), a rape/revenge story played out in reverse (starting at a bleak end and ending at a hopeful beginning) that also hints at other forces predicting the characters’ fates (just as the mother in The Virgin Spring dreams about terrible events, Monica Bellucci’s character in Irreversible has a premonition of her eventual fate). This is not to say that all these films are directly influenced by The Virgin Spring, but Bergman’s film stands almost as an archetypal film version of this “story”, and shows us how so-called ordinary, civilised people can be reduced to carrying out acts of barbarism similar to those of the criminals who committed terrible acts against them. Whereas films like The Last House on the Left and Straw Dogs offer little, if any hope at their conclusion, The Virgin Spring suggests that, even though the family’s pain can never be completely healed, something meaningful can still emerge from such an awful experience, and allow the members of the family to go on with their lives.