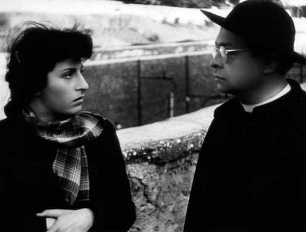 Patriotism is the last refuge of a scoundrel.

Bergmann: Italians of all classes have a weakness for rhetoric.

Bradley: Now doctor, how do you explain the fact that fascism has lasted so long [in Italy] with no fascists?!

Doctor: I imagine that you have already answered that question yourself. I can also imagine what the answer was.”The Italians are like banners in the wind. When everything was going well, everyone was a fascist. Now that things are going badly, there isn’t a single fascist left. As a matter of fact, we are trying to go to the other extreme now.”

Johnson’s epigram has often been misquoted as a critique of national feeling, but his true attack was on the hypocrites and opportunists – scoundrels – who would make “a cloak for self-interest” out of “pretended patriotism” (2). Roberto Rossellini himself has often been accused of opportunism – as recently as August 2007, Michel Ciment reminded readers of Sight and Sound that before his breakthrough with the “resistance” film Roma città aperta/Rome, Open City, Rossellini directed documentaries and features “actively support[ing]” Mussolini’s regime, only switching sides when the Allies invaded (3). Behind its status as a docu-(melo)drama shot on raw stock left over from American newsreels (and incorporating footage shot by Rossellini in 1944 when Rome was still occupied [4]), its commitment to shooting suffering proletarian lives in bombed-out urban locations, and its solidarity with various shades of anti-fascist resistance (5), crouches a film trembling with dubious and “oppressive” ideology (6).

Like SS leader Bergmann (Harry Feist), who “directs” the film by provoking each narrative line (in particular, lighting and staging the torture sequences), and controls the “open city” by means of a cartographic grid, Rossellini divides his filmic Rome into discrete, ideologically weighted spaces, fraught with “moral” connotations. “Real” exteriors and tenement interiors inhabited by “ordinary”, decent people, are contrasted with the “theatrical”, studio interiors where the treacherous actress Marina (Maria Michi), the Italian collaborators and the Nazis moulder (7). Significantly, none of the “bad” protagonists breathe the open air – vampiric (8) henchwoman Ingrid (Giovanna Galletti) would doubtless perish – unlike the “good” characters, resistants Manfredi (Marcello Paglieri) and Francesco (Francesco Grandjacquet), the latter’s fiancée Pina (Anna Magnani), and partisan priest Don Pietro (Aldo Fabrizi). Certain intermediate spaces – such as the bar where Marina meets her ex-lover Manfredi and Francesco before betraying them, while Germans slaughter lambs in the courtyard – are ambivalent, contaminating healthy exterior with dangerous interior, and leaving the “good” vulnerable.

Those lambs are traditional stand-ins for Jesus, and are part of the film’s omnipresent religious imagery. It could be argued that the crucifixes and sacred pictures that clutter each home merely reflect sociological reality in Catholic Italy; or that the juxtaposition of the church, with its iconography and rituals firmly rooted in the community, with the kind of ostentatiously fake Gestapo headquarters that would become the default signifier for Nazism in the Italian war films of the late 1960s and ’70s (9), and which is murderously imposed on the community, is a well taken one. But it is an act of bad faith to transmogrify the “mutilated” body of Communist leader Manfredi into “a baroque crucifix of Christ in His agony” (10) – a gesture morally unjustified by the desire to show the unity of Catholic and Marxist resistance against the Fascists, and particularly repugnant in the light of the Vatican’s Lateran pact with Mussolini, Cardinal Pacelli’s support of Hitler, and his refusal to help Italian Jews being sent to the death camps as Pope Pius XII (11).

This narrative imposition of unity on ideologically disparate groups, while it has some historical basis, is in itself a fascist-like ironing-out of complex, contradictory reality, so that the film’s one conflicted character – Marina – becomes a “scapegoat” (12). To modern viewers, the most obnoxious project of idealisation and normalisation performed by Rome, Open City is in the sphere of sexuality. Marina doesn’t stand a chance – not only is she a working woman, displaying herself in the public sphere for men (with typical hypocrisy, the film equates “acting” with duplicity and prostitution [13], no doubt a critique of fascist-era “white telephone” films [14] and a harbinger of what would become neo-realism’s fetish of the non-professional actor); but she is a consumer, a class traitor, a drug addict, and – worst of all – sexually promiscuous, with her homosexuality equated with Nazism and political defeatism (15). Pregnant life-force Pina is shot down chasing her lover (this scene is a twist on the much-mocked sequence in a classic film about the previous world war, The Big Parade [King Vidor, 1925] [16]). Pina’s fall is composed with her shapely, stockinged legs directed towards the heterosexual male viewer; her sexual transgression evidence of a healthy sexuality compared to the sterile Marina, and brought safely under the aegis of church and community by her plan to marry Francesco that morning (17).

At this mid-point, it is as if Rossellini emblematises the death of all hope for Italy; the narrative quickly goes from bad to worse for the resistants. When the boys witness Don Pietro’s execution in the last sequence, this is the culmination of a complex, collective Oedipal scenario where all father figures – good, bad and inadequate – are purged. The war prematurely ages the boys and – despite one child’s protest that “girls can be heroines too!”, it is a boys’ fight – gives them a terrifying freedom, as they store guns and explosives at home before roaming the streets, carrying messages to partisans and ambushing Nazis. Rossellini would take this subplot about the corruption and brutalisation of children born into totalitarianism and war to its logical conclusion in the last film of his war trilogy, Germany year zero/Germania anno zero (1947), which ends with young Edmund’s suicide (18).

The critiques of Rome, Open City outlined above are almost as old as the film, and have been articulated most eloquently by Rossellini himself in his continued experiments with realism and representation, first in the great tetralogy with Ingrid Bergman (who was famously inspired to contact Rossellini after seeing Roma, città aperta [19]), and later in the historical enquiries made for television. Rome, Open City is probably the most celebrated and representative example of neo-realism – perhaps because of its timing, but also because the power of its mythos and melodrama is given sanction by visual and geographical claims to “authenticity” (20). Its undimmed excitement is ironically achieved by techniques – strong plotting, dramatic episodes, fast cutting (21) – which aim for a visceral response from the viewer that would be displaced in Rossellini’s later work. But the film’s real importance was never in its “objective”, unmediated, “overwhelming truth”, its “moral outrage” or its “desire to testify” (22), but in its clashing modes of realism, genre and archetype, a liberating model that would influence filmmakers worldwide.