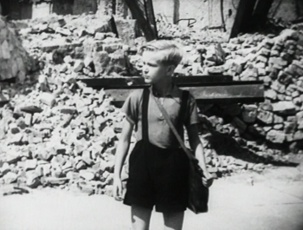 In an essay from 1963, François Truffaut wrote:

In some of my films I’ve tried to follow a single character simply and honestly in an almost documentary manner, and I owe this method to Rossellini. Aside from Vigo, Rossellini is the only filmmaker who has filmed adolescence without sentimentality and The 400 Blows owes a great deal to Germany Year Zero. (1)

After the passage of six decades, the filmmakers who have heeded the lesson of Rossellini are diverse, yet comparatively few. Apart from Truffaut, it’s a group that includes Andrei Tarkovsky, Ingmar Bergman, Wim Wenders, Víctor Erice, Bill Douglas, Abbas Kiarostami, Bahman Ghobadi and Lynne Ramsay, all of whose works on childhood probe, without sentimentality, the chasm between adulthood and the world of the child.

Coming after Rome città aperta/Rome, Open City (1945) and Paisà/Paisan (1946), Germania anno zero/Germany, Year Zero is the third part of Rossellini’s celebrated war trilogy, a cycle of films which chronicle, with clear-eyed immediacy, the suffering of the Second World War and its catastrophic aftermath. In his 1989 monograph on the director, Gianni Rondolino describes the genesis of the film: “Rossellini’s eldest son [9 year-old] Romano died tragically in 1946. Death, which carried such weight in the director’s work […] had now struck him directly. His pessimism became more intense, more painful. As a counterpoint, there was the […] success of Paisà.” (2) Rondolino, like Enrique Seknadje-Askenazi, highlights the fact that in both form and content, Germany, Year Zero is a transitional work, looking forward to Rossellini’s later films such as Stromboli, terra di Dio (1949) and Viaggio in Italia/Voyage to Italy (1954). Set in post-war Berlin, it is a film – a picture – of a world destroyed. Nazism, though defeated, still lingers lugubriously, not only in the twisted metal and bombed out buildings but also through characters such as pederast schoolteacher Enning (Erich Gühne).

Carlo Lizzani, Rossellini’s assistant on the film, and later director of films such as Achtung Banditi (1951) and Il processo di Verona (1963), described his first impression of Berlin as one of fear. For Lizzani, Nazism was “a defeated giant reduced to pieces but one which could still move and react” (3). His willingness to work on the project was driven by a desire to “see with my own eyes […] the skeleton of this dragon that had terrorized the world and that had just been vanquished” (4).

The protagonist of Germany, Year Zero is Edmund Kohler (Edmund Moeschke), a 12-year-old boy living in Berlin with his ailing, bed-ridden father (Ernst Pittschau) and older siblings, brother Karl-Heinz (Franz-Otto Krüger) and sister Eva (Ingetraud Hinze). With the adult males of the family unable to work, Edmund is forced onto the streets where he attempts to make money by selling goods on the black market. He is a child for whom the world of childhood is alien. “A seemingly fragile creature”, observes François Vallet, “Edmund possesses real strength of character. If false ideologies, the last remnants of defeat, can still infuse him, he refuses the cowardice of adults. He wanders among the rubble and ruins like an animal, haunted by remorse in a jungle of stones.” (5)

Recent critical attention has been paid to the character of Edmund in relation to the concept of the Deleuzian seer. Jaimey Fisher, in particular. has brought into question Deleuze’s characterisation (6) of (child) characters in neo-realism as passive, as seers suffering motor-helplessness: “Deleuze’s concept of the child as a naturally weak observer reeks of an imaginary discourse about youth, particularly because children, even in Italian neorealism, are anything but simply weak or passive.” (7) Fisher is undoubtedly right when he states that the character of Edmund, like several child characters in neo-realism (Pasquale in Paisà, Bruno in Vittorio De Sica’s Ladri di biciclette/Bicycle Thieves [1948]) oscillate between passivity and activity. With his father bed-ridden and his brother unwilling to report to the authorities, Edmund shoulders responsibility far beyond his years. In this sense he would appear to be active. However, not only are his actions often fruitless, he often finds himself alienated from those around him (both adults and other children). As Pierre Sorlin points out, “spectators should feel sorry for Edmund, who has lost everything and has no future. Defenceless though he is, the boy is able to define his own private law, which makes him as powerful as an adult.” (8)

Echoing earlier observations by Vallet, Edmund’s “own private law” is corrupted not only by his desperate surroundings but also by the teachings of Enning. After poisoning his father, he takes to the streets – ripped apart by guilt. Jacques Rancière has pointed out that Rossellini was more than willing to make an entire film for the sake of a scene, a shot, sometimes for the sake of a gesture – in Germany, Year Zero it is Edmund wandering the skeletal landscape of Berlin in the film’s final scenes (9). John O. Thompson, writing about the filmic representation of childhood death, compares the character of Edmund to that of Ivan in Andrei Tarkovsky’s Ivanovo detstvo/Ivan’s Childhood (1962):

Edmund’s childhood is like Ivan’s in its courage and its desolateness, but unlike Ivan’s in its taintedness. For Germany to be at year zero, something had to have been very sick, very murderous at the heart of Germany […]. Edmund’s patricide and suicide partake of that illness, of that evil, even as they register as having, mysteriously, their own expiatory function. (10)