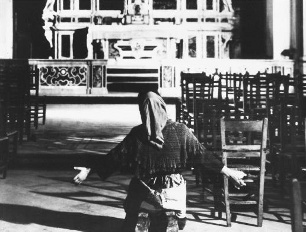 Generally regarded as something of a minor work, L’amore nevertheless emerges from that same frenetic and creative period of filmmaking that saw Rossellini produce the great landmark films of the so-called “war trilogy” – Rome città aperta/Rome, Open City (1945), Paisà/Paisan (1946) and Germania anno zero/Germany, Year Zero (1947) – the films with which he effectively gave birth to what soon came to be internationally-renowned as neo-realism. In contrast with the political and social concerns of the trilogy, however, the two short films which make up L’amore were largely made, as Rossellini himself acknowledges in the film’s epigraph, to showcase the consummate acting talents of Anna Magnani. Magnani’s powerful performance as Pina, the housewife and pregnant mother mercilessly mown down by German bullets in Rome, Open City, had contributed enormously to making the film such a great success, and in its wake she and Rossellini were inevitably drawn into a very passionate love affair. The two short films of L’amore would be the cinematic fruits of this stormy affair (1).

The first film, Una voce umana (A Human Voice), is a fairly close adaptation of La voix humaine, a theatrical monologue published by Jean Cocteau in the early 1930s. The idea of filming it came from Magnani herself who had already performed the piece in Rome in 1942 at a gala occasion in celebration of one of her most successful stage revues. When she joined Rossellini in Paris in early 1947 in order to receive an award for her role in Rome, Open City she proposed it to him as a viable film project. Having recently met Cocteau himself in Paris and been buoyed by his declared admiration for Paisà, Rossellini promptly agreed. Willingly interrupting his preparations for Germany, Year Zero, which had become mired in problems, he quickly hired a studio in Paris and, using the French crew on hand, shot the film in just two weeks.

The result was an intense chamber piece unlike anything that Rossellini had done to that date, using the camera like a microscope to relentlessly observe and record the psychological disintegration of a woman jilted by her husband (or lover? we never know). Indeed, with its focus on individual psychology and its staging of the drama of the self, Una voce umana is, as Peter Bondanella points out, Rossellini’s first experiment with the cinema of psychological introspection that he would soon be practicing in his films with Ingrid Bergman (2). And, like the Bergman films, when it was eventually released it drew largely negative critical reactions. While some were ready to grant it the status of competent-enough filmed theatre, even Rossellini’s greatest paladin, André Bazin, could not help expressing his bitter disappointment. The film was, he declared, “simply scandalous in its cinematic laziness. It’s obvious Rossellini doesn’t even worry about where to put his camera; he depends on his actress’ body language.” (3) And yet such accusations would seem to be, at the very least, myopic. It’s clear that the central focus is on Magnani’s mesmerising, even if, at times, slightly shrill, performance, but with its very active camera, its profusion of close-ups, its dynamic editing and its expressive use of light and darkness, the film is anything but lazy and is probably as close to an exercise in cinematic style as Rossellini ever came. A clear indication of Rossellini’s greater than usual attention to visual style here is given by the pronounced presence of mirrors throughout the film in order to underscore the ongoing fragmentation of the self.

Yet at 35 minutes, La voce umana was obviously too short to be released on its own and, even as he continued to work on Germany, Year Zero, Rossellini pressed his screenwriters for another one-hander for Magnani. Federico Fellini, who had worked with Rossellini on both Rome, Open City and Paisà, finally came up with the subject for Il miracolo (The Miracle), the story of a simpleton shepherdess, a “holy fool”, who, due to her religious zeal and her passionate devotion to Saint Joseph, comes to believe that she has been visited by the saint himself and granted the grace of carrying his child.

The simple-minded character of the shepherdess, Nannì (Giovanna), masterfully incarnated by Magnani, who here manages to eliminate completely the slightly hysterical tone that sometimes threatens to topple La voce umana into the realm of pure melodrama, clearly anticipates the characters of Gelsomina and Cabiria in Fellini’s La strada (1954) and Le notti di Cabiria/Nights of Cabiria (1957), but Magnani channels an animistic vitality into the role that makes the poetry of Fellini’s two later creatures appear wan in comparison. And in fact, despite Fellini’s own appearance in the film as the silent and mysterious vagabond who prompts Nannì’s religious delirium, perhaps more than the Gelsomina of La strada Magnani’s strong-willed Nannì brings to mind the “durochka” or holy fool, of Andrei Tarkovsky’s Andrei Roublev (1966). Indeed, in spite of the undisguised and feral sexuality of her character, Nannì’s via crucis through the jeers and cruel taunts of the townspeople likens her to nothing less that the Christ of Pier Paolo Pasolini’s Il vangelo secondo Matteo/The Gospel According to Matthew (1964).

The tour-de-force of Magnani’s acting is paralleled and sustained by some truly inspired filmmaking on Rossellini’s part. Having chosen to film at Maiori, on the Amalfi coast, a location he had discovered during the making of Paisà, Rossellini manages, through some of the most carefully-engaged camerawork and shot composition of his career, to create a series of extraordinary images which fuse character and landscape into an indissoluble whole, a unity that’s both sealed and emblematised when Nannì, in the final stages of her laborious climb to the hilltop church, drinks by sucking moisture from the rocks. At the same time, with absolutely no hint of an affected pictorialism, many scenes effortlessly evoke medieval and Renaissance fresco painting.

As a filmic diptych, juxtaposing the claustrophobia of individual psychological disintegration in a dark, closed room with the unboundedness of a self-induced spiritual delirium in the luminous wilds of nature, L’amore would now seem to represent nothing less than a minor masterpiece in Rossellini’s entire oeuvre. Yet critical reception on its general release in August 1948 was, as already stated, largely hostile. Some criticisms were quibbles and misunderstandings but the charge that cut deepest was the one that would dog him from now on: “Rossellini has completely abandoned neo-realism” (4).

In spite of all the negative reactions, however, the film encountered no legal or censorship obstacles in Italy. The religious orientation of Il miracolo was certainly decried by left-leaning critics but presented no real problem for the Catholics who even welcomed it as a representation of “regenerating suffering” (5). The film received a very different reception in America, however. When Il miracolo was premiered at the Paris Theatre in New York in December 1950, grouped with two other short European films (including Jean Renoir’s uncompleted 1936 film Partie de campagne/A Day in the Country) under the generic title of Ways of Love, it provoked a violent reaction from the combined forces of the Legion of Decency and the Catholic authorities who all accused the film of blasphemy. The Paris Theatre was picketed by thousands of Catholics and Cardinal Francis Spellman himself issued a public call for the film to be banned. Bowing to pressure the city authorities soon revoked the film’s license and it was withdrawn. Distributor Joseph Burstyn, however, appealed the revocation in a legal challenge that eventually reached the U.S. Supreme Court. In February 1952 the Court not only upheld Burstyn’s appeal but also overturned the Court’s own decision in 1915 which had for decades denied films the status of self-expression and thus protection under the First Amendment. Part of the miracle of Il miracolo, then, turned out to be its role in initiating the beginning of the demise of film censorship in the United States.