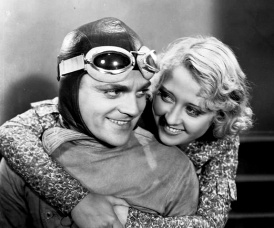 As Gerald Peary remarked in his 1971 article, “Hawks at Warner Brothers 1932”, this often-neglected work appears to resemble a typical Warner Bros. “impersonal film about race car driving” featuring its most popular contemporary star James Cagney and having little interest for viewers in comparison with the “more immediately engaging Tiger Shark” (1). Since the studio re-used the property seven years later under the different title of Indianapolis Speedway (Lloyd Bacon) with Cagney’s contemporary screen partner Pat O’Brien taking over the role of Joe Greer and Frank McHugh repeating his earlier performance as Spud Connors, The Crowd Roars appears to be an unnecessary pit-stop for audiences wishing to accelerate towards the director’s more celebrated works. This approach is mistaken. Although The Crowd Roars resembles a run-of-the-mill Warner Bros. studio production of the time, it is also an early example of how Hawks inserts his unique brand of authorship into any genre, no matter how formulaic and primitive it may initially appear.

Peary pinpoints several later Hawksian motifs that appear in The Crowd Roars. He also briefly notes that it foreshadows Red Line 7000 (1965), a much later Hawks work regarded by most critics as a “lesser film” or a complete disaster (with the notable exception of Robin Wood [2]). The Crowd Roars also resembles The Dawn Patrol (1930), with the younger generation taking over from their older predecessors but with the distinctive difference of a “happy ending”, an aspect that the director undermines in his own inimitable fashion. Like Red Line 7000, the film begins with a crash in the motor racing arena and Hawks’ audience are left in no doubt that this type of disaster will occur again in the future.

Cagney’s Joe Greer resembles both Dizzy Davis of Ceiling Zero (1935) and James Caan’s Mike Marsh of Red Line 7000. Both are professionals attracted by what Robin Wood terms the “lure of irresponsibility” inherent within their chosen occupations. But, unlike Dizzy, Joe does not pay the ultimate price for his redemption at the climax (3). However, his deep-rooted masculine insecurities do foreshadow those of Mike Marsh. Although enjoying his illicit relationship with Lee Merrick (Ann Dvorak), Joe insists on drawing almost psycho-pathological boundaries between pleasure and professionalism. But Joe and Mike seek to escape commitment for different reasons. Mike expresses hesitation at Jim Loomis’ announcement of his new relationship with Holly at the beginning of Red Line 7000 as if affirming Joe’s earlier belief that marriage and racing car driving do not mix. But while Mike cannot really accept Gaby’s sexual professionalism and the possibility that she can also be a “good” racing car driver, Joe’s puritanical attitudes concerning his relationship with Lee have more to do with outmoded Old World customs involving the protection of a younger sibling (an element that is similar to Tony Camonte’s behaviour towards Cesca in Scarface [1932]). Although Hawks borrowed this theme of family protectiveness from a 1917 Broadway play starring Walter Huston, the Scarface parallel is more relevant. Joe reacts against his brother’s growing sexual maturity in the same way that Tony does towards Cesca (4). Joe sees in Eddie (Eric Linden) qualities he denies in himself. While his father condones drinking a year before the end of Prohibition, Joe feels himself duty-bound to deny his sexual involvement with Lee. This is another example of a Hawksian hero failing to come to terms with sexual desire while wanting to maintain his public role as a professional tough guy as well as protect family honour. However, like Hemingway’s Harry Morgan in To Have and Have Not (1937, filmed by Hawks in 1944), Joe soon finds out that “No matter how a man alone ain’t got no bloody fucking chance”. Dangerously overprotective, Joe not only attempts to disrupt the growing attraction between Eddie and Anne Scott (Joan Blondell) but also ends his relationship with Lee. Alcoholism (an obvious shield to drown deep masculine insecurities) and irresponsible actions on the racetrack lead to the death of his partner Spud and contribute to his professional and psychological decline.

Although Joe escapes the kind of mental and physical bind that also affect Mike (Garry Owen) in Ceiling Zero and Eddie (Walter Brennan) in To Have and Have Not, he is now “no good” and follows the path of such “bums” as Dude (Dean Martin) in Rio Bravo (1959) and J. P. Harrah (Robert Mitchum) in El Dorado (1967). Despite giving up drinking after the experience smelling Spud’s incinerated corpse on the racetrack, Joe nevertheless reaches the lower depths of his later successors. When he emerges from a train looking like a hobo, he sees a discarded banana on the ground. He picks it up and walks away into the distance, the low-angle camera framing his humiliation as if anticipating the quick cut to the coin in Rio Bravo’s spittoon. But Joe doesn’t have Rio Bravo’s John T. Chance (John Wayne) to help him. He will have to help himself. But his redemption will also owe much to the help of his former lover. Realising the personal nature of his fall from professional grace, Joe collapses weeping into the arms of Lee. His emotional state foreshadows that of J. P. Harrah who also weeps when he realises the nature of his own spiritual fall in El Dorado.

Like Tiger Shark (1932), To Have and Have Not, Hatari! (1962) and Red Line 7000, The Crowd Roars mingles the world of everyday reality with fictional reconstruction. Whether involving the fishing industry, tuition in deep-sea fishing, big game hunting, or racing car driving, Hawks contrasts professional expertise with personal issues of self-respect and self-reliance. His heroes may fall at any time, and no one is immune from failure. Professional success, disdain for outside audiences of non-professionals (who can never understand the close bonding within this self-contained professional world), and personal and social commitment characterise the world of the Hawks group. And yet, even relishing adventure has its pitfalls. Lee describes the racetrack audiences as just a “lot of people watching for wrecks and roaring for blood! All they want to see is a car turn over so they can hold their breath. And, in the end, when they remove what’s left of you, they point to it and say, ‘Oh, they’ve taken him away’.” Joe will not only be responsible for producing such a “gratuitous pleasure”, he will also take in the smell of the body that is “removed”, an odour that will haunt him until he finally overcomes his guilt and trauma in the final race. His irresponsibility is personal and professional. By contrast, Red Line 7000’s Mike Marsh escapes such a logical outcome for similar character flaws when his “victim” does not die in a car crash.

Although the quintessential Hawks woman has yet to appear in The Crowd Roars, Naomi Wise sees her dualistic prototype in the roles of Lee and Anne, characters who supply the audience with complimentary critical perspectives towards Joe as fanatical in his profession and bigoted towards women – “a rare viewpoint in the action genre” (5). Furthermore, Anne’s sympathy towards Lee’s situation when she seeks help to find Joe in Indianapolis anticipates the later scene of female solidarity in Red Line 7000 when Lindy Bonaparte (Charlene Holt) and her friend sympathise with the similarly abandoned Julie Kazarian (Laura Devon).

Hawks also pays tribute to many famous racing car drivers in the film’s credit sequence. Several actually participated in the dangerous racetrack scenes as well as appearing in small cameo roles such as William Arnold, the winner of the 1930 Indianapolis 500 race. Hawks also enlisted the assistance of the Dusenberg brothers (who manufactured racing cars) for many of the action sequences in the film (6). Meanwhile, Joe approaches several real life professionals in the latter part of the film when he seeks work but they all refuse his overtures. As well as recognising Joe’s fallen status, they also intuitively understand that he is too good to be a “pit-man” and needs to find his own form of salvation. Since he has given up drinking, Joe is not destined become a “rummy” like Eddie nor be consigned to a demeaning role like Mike in Ceiling Zero. He is a figure who will be able to “look after” his brother when danger occurs in the film’s last sequence, and will do so in a manner similar to Dude who begins his process of recovery by looking after Chance at the end of Rio Bravo’s opening sequence. Reunited with Lee and free from his destructive prejudices against Anne, Joe can now join his injured brother in the racing car and win by operating as a team in the same way that Geoff Carter (Cary Grant) will do with Les (Allyn Joslyn) in the climax of Only Angels Have Wings (1939) and Cole Thornton (John Wayne) with Harrah in the final scene of El Dorado.

Although an early Hawks work, The Crowd Roars looks forward to the future as well as back to the past. It implicitly suggests that although heroes may survive one day, the next may be as bleak as the one facing the flyers in The Dawn Patrol. Redemption may be temporary and “just for a day” as “Slim” sings in To Have and Have Not. Despite the male adolescent nature of the ending where Joe and Eddie appear to have “seen everything but learned nothing” (as Dorfmann [Hardy Kruger] says about Towns [James Stewart] in Robert Aldrich’s 1966 The Flight of the Phoenix), the “sense of precariousness” Wood sees in the closure of Red Line 7000 may still haunt the spectator even in an early work such as this (7). The Crowd Roars may be regarded as a “pit-stop” film for Hawks. But it is one where he makes the necessary adjustments to his creative talent facilitating further achievements in the arena of Classical Hollywood cinema.