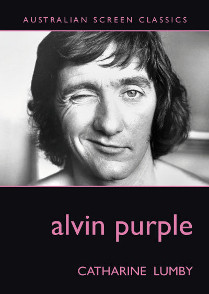 If you take a piece of paper and cut off half of the image of Graeme Blundell on the cover of this book and then inspect the left-hand side, you will get what seems to be the knowing, winking Aussie bloke of folklore. If, then, you cut off this side with your strip of paper and inspect the right-hand side of the face, you’ll find something very different: a mildly watchful, somewhat timid image at odds with the other half. This laborious introduction is by way of saying, you – that is, we – should stop and think again about this film.

My own attitude to Alvin Purple (Tim Burstall, 1973) at the time of its release was pretty much along the lines of, “well, if it’s popular that’s something, but it’s certainly not art.” I don’t recall having wanted to review it then, and, without feeling any need to demolish it, tended to be more or less dismissive of it in later writings. So, I said to myself, what is this excellent series up to in devoting a whole book to this “ocker” piece, mild fun as I recalled at the time, without ever feeling any need to look at it again? Now, I have to say that Catharine Lumby gives ample grounds for anyone to think again about this financial success so derided by the critics. Perhaps even to watch it again.

Above all, the book makes a potent case for the importance of seeing the film in context. This will almost always be instructive in the way we read a film. In relation to Alvin Purple, we should, following Lumby’s lead, have in mind several key contexts. There was a powerful sense of “liberations” in the air in the late ’60s-early ’70s, for example, in matters of race and sexuality, of gender stereotypes, of educational theory, of attitudes to drugs, of a changing political climate. Some of the fervours surrounding these may seem quaintly outmoded now, but Lumby recreates vividly a sense of those not so distant decades of which Alvin now seems so emblematic an artefact. She is very strong on 1970s obsessions, and particularly on the burgeoning feminist movement of the period.

But it is not just the social context which is so crucial to “placing” – and perhaps even understanding – this film. The book is equally useful in recalling to us the nature of the Australian film industry at the time, though the use of the term “industry” suggests a more coherent entity than anyone would have recognised then. Lumby draws attention to the two different strands of filmmaking that were finding favour with divergent demographics: the ocker comedies which had a popular following, and the period pieces which attracted critics and supposedly more discriminating audiences. As she says, “The anti-ocker forces won out and Australian cinema took a very different turn, in the process becoming hailed as a standard-bearer for a much-touted Australian cultural renaissance dominated by arty period films.” (p. 65)

In such an industrial/cultural setting, Alvin had its genesis. As to “industry”, Lumby’s account of some of the key players brings the period evocatively to life. Almost no one was more influential in 1970s Australian cinema than Alvin’s producer-director, Tim Burstall, and the book draws valuably on his assessments of industry directions. Other names to conjure with in regard to this film and its time are playwrights Alan Hopgood (author of Alvin and other screenplays) and David Williamson (quoted in reference to the critical reception of Burstall’s next film Petersen [1974]), associate producer Alan Finney and Hexagon Productions. The aim of the latter was, at least for Burstall, to make “a populist Australian comedy that could cash in on the new R-certificate.” (p. 21) In other words, industry and the new sexual licence were operating in tandem, and this would partly explain Alvin’s popularity. There was undoubtedly a sense of change in the air, in theatre and society at large as well as film, and Alvin is both symptomatic of such change and one of the means by which it infiltrated the culture.

Even more impressive in this study is the way the protagonist of the film is analysed in terms of these cultural shifts and in comparison with some of the other influential male images of the period. Two contemporary popular and contrasting images were those of Paul Hogan and Garry McDonald (aka Norman Gunston). Hoges was “a knockabout blue-collar larrikin” (p. 47), with a dim offsider, “Strop” (John Cornell), while Gunston was a nerdish interviewer in an ill-fitting tuxedo jacket. Both of these personas offered critiques of Australian masculinities, and one of the fascinating things about Lumby’s book is how she interrogates yet another incarnation of the Australian male in Graeme Blundell’s Alvin. By contrast with the various kinds of assurance exhibited by Hoges and Gunston, Alvin “is an unassuming lower-middle class boy adrift in a self-consciously bourgeois sea” (p. 49).

Blundell had been at the cutting-edge not only of such theatrical developments as Melbourne’s experimental La Mama but also of the activism concerned with censorship conflicts. He’d been involved with Alexander Buzo’s play Norm and Ahmed, which famously used the word “fucking” on stage. He was not an actor, on the strength of his credentials, likely to lend himself to mindless ockerism; at the very least, his image of self-aware reticence might be said to subvert such an easy agenda. He was identified with what Lumby characterises as “a genuine sense that the battle against censorship was part of a broader battle against politically and socially oppressive forces.” (p. 57) Possibly the most embarrassing aspect of his Alvin 30 years on is the truly appalling hairstyle and clothes he was required to wear: it is frightening to think these might ever again be fashionable, but vestigially useful to have them preserved on celluloid as a terrible warning to future generations.

Alvin may be the irresistible object of female sexual intentions (which would lead to the divestment of the garments just shuddered at) but Lumby’s analysis prevents our adopting a simplistic attitude of outrage at the film’s alleged sexism. She offers a very thorough, thoughtful, unclamorous reading of the film, taking on board what it represents of women’s desires. Without reducing the film to a mere smorgasbord of ’70s radicalism, she convincingly argues for Alvin’s being a more complex text than one might have expected. Not only does it challenge some accepted notions of masculinity, but Burstall chose Blundell to play Alvin in a way that would be acceptable to both men and women, describing Blundell’s Alvin in these terms: “He isn’t the centre of the action. He’s the sort of person who things happen to. He doesn’t make things happen.” (p. 34) A protagonist along these lines is unlikely to rouse male envy or female obloquy. He is passive enough, despite his donnée of mysterious sexual allure, for women to feel that he is their target rather than them his.

Lumby situates this discourse on Alvin as a representation of female desire in the 1970s context of a feminist polemics which made itself felt variously in the high-level argumentation of a Germaine Greer and in more populist vein in the pages of Cleo magazine. In their different ways, and possibly aimed at different female audiences, these and others like them insisted on women’s rights, particularly in what women did with their bodies in sexual and other matters. Cleo was, in 1972, the first Australian magazine to launch a male centrefold – of actor Jack Thompson, hands discreetly placed (to avoid offence? or titillate the mag’s readers still more?). Viewed against such background material, it is possible to reconsider Alvin as a comic contribution to the dialectic relating to women’s sexuality which was so much a feature of the decade.

This may or may not qualify Alvin Purple as a progressive text, but Lumby does persuade us that it is amenable to more sophisticated assessment than it has commonly received. The “merely” popular may in fact have a good deal to tell us about what was widely acceptable at the time. It may, as well, in the hands of a filmmaker who knows what he is about, tell us things we weren’t programmed to notice at the time. I don’t mean that Alvin Purple is a neglected masterwork, and I don’t think Catharine Lumby intends us to reach any such conclusion. What this admirably lucid and wide-ranging study accomplishes is to value the film for what it does achieve, to avoid easy put-downs and to unravel it as a sort of matrix of cultural strands. That doesn’t make the film great, but it does make it interesting, and the book that pulls this off is another feather in the cap of a generally provocative series.