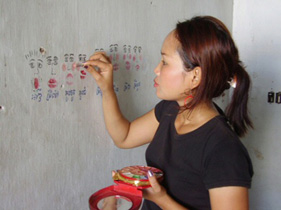 The main reason I went to the Leipzig International Festival for Documentary and Animated Films this year was the retrospective: the festival turned 50, something like 20 programs offered a passage through a demi-century filled to the brim with masterpieces barely remembered these days – names forgotten, titles lost. Tell me one other place where one could see in 2007 a program made up of films by amongst others Joris Ivens, Santiago Alvarez, Lê Mạnh Thích and Robert Kramer!

Just the right time, as well, to take a look at how things have changed since the demise of the German Democratic Republic, how people deal with that history. Take the “dove affair”. Since 1962, Picasso’s peace dove had been the festival’s official symbol, quite fittingly as Leipzig defined itself as an event for world peace (Leipzig’s motto: Films from all over the World for World Peace; or some variation of that, with or without some additional homily). Recently, in 2005, Picasso’s dove was replaced by a confused pigeon, or maybe a funky chicken, who knows – whatever feathery Viech it is, it looks young, dumb and devoid of cum. Now, the question is: why would anybody want to get rid of an internationally established symbol of peace, and a Picasso at that? Whatever folks were actually thinking, what its abrogation looks like to me, particularly in this day and age of Das Leben der Anderen (The Lives of Others, 2005), is: the Picasso dove, its use by the GDR was but propaganda and therefore something to get rid of now (without, mind, completely messing up the corporate identity; hence the pigeon…).

Like every major German festival – the Berlinale, the Oberhausen International Short Film Festival (were there any others with stamina for decades?), post-war creations all – Leipzig was strongly defined by politics real as well as aesthetic. It also functioned as a meeting place for folks from both side of the century’s designated dividing line, defied by obvious contradictions like the Organisation of Nonaligned Nations – there’s always a third way… – as well as all the internal, often internecine struggles inside the respective sides, something the retrospective would talk about again and again.

The program as such looked – in a very intriguing way – more gut-made than curated along some thesis or guiding principles. Well, they didn’t want to show again films that had already been featured in the 40th anniversary retrospective, but that’s just about it. Maybe this feeling is also due to the retrospective’s relative smallness. Just leafing through the book accompanying the event, “Bilder einer gespaltenen Welt” (“Images of a Torn World”), not the programs as such, made one wonder about so, so many titles and names. And I mean, the glorious double DVD published in celebration – a must-have, for Richard Cohn-Vossen’s In Sachen H. und acht anderer (In the Case of H. and Eight Others, 1972) and Peter Rocha’s monumental Lusatia Trilogy (Hochwaldmärchen [Timber Forest Fairy Tales, 1987], Leben am Fliess [Life Along the Rivulet, 1989], Die Schmerzen der Lausitz (Lusatia dolorosa) [The Pain of Lusatia (Lusatia dolorosa), 1990]) alone – what a pleasure, later that November, to finally see Bernhard Sallmann’s extraordinary Die Lausitz 20 X 90 (2004), at the Shadow Festival! – contains several films not included in the festival’s retrospective (eg. the Cohn-Vossen). All that, and the sense of programming space wasted to some special programs of more than dubious necessity, at least in an anniversary year like this: Ten Years La Lucarne, Lost Paradise Found, and Endless Stories, all decidedly under-programmed niceties, cost the retrospective about ten slots, let’s say something between 10 to 30 films. Not to mention money and man power, this being key when dealing with films from places like Vietnam and Mozambique, when you have to come to terms with “complex” archival situations (and not just some hard-ass policies), different languages, etc. Some cinematographies probably nixed themselves for the program due to these kinds of strains.

It was a good thing that Grit Lemke, responsible for the retrospective’s international wing, focused her energies on getting films exactly from those countries for which Leipzig was more than important: all the emerging and fighting nations whose destinies – one in internationalist hopes – were so essential to the festival’s as well as the GDR’s sense of self and mission all through the ‘60s and ‘70s, contra (the incubus of) the Hallstein Doctrine. She also chose the kinds of films, also, that at times ran into some trouble in Leipzig, like José Massip’s fighting lesson in partisan warfare, Madina Boe (1968), which at the time didn’t get shown in competition due to, let’s say, the highly tangible feeling that Cuba had different ideas about the importance and methods and general politics of armed liberation struggle than the GDR. But let’s not start with that enervating subject of suppressed, shelved, forbidden etc. films: the histories of – state – socialist and communist cinemas are too often reduced to that, which is simply disgusting (one might also say: reactionary, and dumb). Well. Let’s stay with the films which were in unambiguous accord with their states and their affairs, like Hristo Kovacev’s fiery, SozReally romantic cine-poem Svetlini i hora (Lights and People, 1961), or Iván Argüello’s dashing Rompiendo el silencio (Breaking the Silence, 1984), or, on a similar subject, Lê Mạnh Thích’s relaxedly focused, fluid Duong day len song Da (Installing Electric Cable at Da River, 1982): these three treasures plus Madina Boe alone made the trip to Leipzig already worthwhile. Add to this the three poster films by Jörg Hermann, Chile, Hitlerpinochet and No (all 1976; the first two in collaboration with Juan Forch); add valiant Karl Gass’ mind-blowing montage movie masterpiece Das Jahr 1945 (1945, 1984), officially shown in honour of the 90th birthday of the GDR’s single-most influential director of documentaries but for me always a part of the retrospective; throw in the Lusatia Trilogy, and you’ve more glory than fits into a by-the-book recognitions top ten. 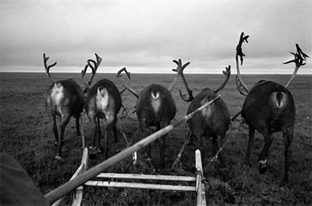 Yes, there were also several wonderful new films in Leipzig, like: Anastasia Lapsui & Markku Lehmuskallio’s mesmerising essay on Nenets spirituality, Matka (Travelling), an envelope-pusher in ways similar to Andrea Tonacci’s extraordinary, intellectually as well as emotionally agile and penetrating Serras da Desordem (The Hills of Chaos); or Rithy Panh’s stunningly graceful Le papier ne peut pas envelopper la braise (Paper Cannot Wrap up Embers); or Barbet Schroeder’s educational-cum-hilarious L’Avocat de la terreur (Terror’s Advocate), a walk through the hall of mirrors, mazes – of ideologies, aims, financing, support networks – of international terrorism, right or left or wrong, considered here as a left-over from the Nazis’ extremely ambiguous and often self-contradictory anti-colonialist ambitions (all that, and who fucked who over who, and who ripped off who, and…); or Wang Bing’s He Fengming (Fengming, a Chinese Memoir), a simple story of one life of suffering in the 20th century told straight on; or, on the more swanky side, Gerd Kroske’s charming Wollis Paradies (Wolli in Paradise), a portrait of a demimonde character who, ao. dreamed of a socialist bordello. All that, plus certainly even more glory to be had but also a ton of trash to suffer (just reading the catalogue blah about some movie on a teenage girl in Tibet who wants to build up an all-women ice hockey team gave me the creeps; just remembering that something so vile as Francesco Uboldi’s slice of Mondo-fascism – Africa addio, indeed – Jean Paul, was selected for competition made me wonder about quite a few things; but…).

Nevertheless, let’s stay with the retrospective, for that should remain a mainstay of the festival, even given greater importance for the festival’s image: for it’s that which makes a major difference between Leipzig and two rivals time-wise close, Amsterdam’s IDFA and the Duisburg Filmwoche, an event granted some serious importance inside certain – oldnew hipsterish, aesthetic left – quarters of German-language film cultures, if nowhere else. Leipzig has a history, almost as old as the festival itself, of retrospectives quite a few of which proved important, compared to which IDFA’s attempts at retros tended to look lame, while Duisburg doesn’t really dig into film history like that which is just as well. Meaning: Leipzig has something of merit and beauty which the others don’t have, something which, if I’m not mistaken, becomes ever more important in festival politics: quite a few journalists and programmers select their festivals based upon their ways of dealing with film history, and quite a few filmmakers still prefer to show their works at places with a sense of history. Let’s hope folks in Leipzig are aware of this and keep on with the good film-historical work.