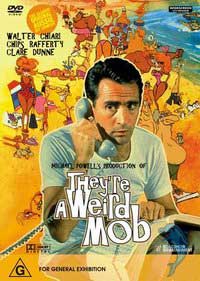 By the mid-1960s, two near-down-and-outs came together. One was Michael Powell. Despite having made (many with Emeric Pressburger) some of the greatest – and best-loved – British films of the 1940s (The Life and Death of Colonel Blimp, 1943; ‘Know Where I’m Going!’, 1945; The Red Shoes, 1948; etc.), his 1960 film Peeping Tom practically killed his career. It was attacked by the critics of its day with particular venom. Dilys Powell, the doyen of British critics, wrote in The Sunday Times, “He [Michael Powell] did not write Peeping Tom but he cannot wash his hands of responsibility for this essentially vicious film.” (1)

This intense reaction to a film now loved and respected by so many film scholars made it almost impossible for Powell to get new film work, and he had only found work making several episodes of television series.

The other down-and-out was the Australian film industry. In the previous decade, only a handful of real Australia filmmakers had been able to complete a feature. Only foreign films seemed able to remind filmgoers that there was such a place as Australia (On the Beach, Stanley Kramer, 1959; The Siege of Pinchgut, Harry Watt, 1959; The Sundowners, Fred Zinnemann, 1960). And often their real raison-d’être was for foreign film producers to use up currency frozen in Australia.

Meanwhile, a local Australian book, They’re a Weird Mob, had been a phenomenal bestseller in Australia since its publication in November 1957. Five reprints had followed within a few months. By 1981, half a million copies had been sold. (2) On the cover, the book is credited to Nino Culotta, but this was a non-de-plume for one John O’Grady. The book successfully captured the mood of post-war Australia with both nationalistic pride and a bit of embarrassment in the way we adapted the English language to our own purposes, and a sense of contentment in a way of life that could stretch from a beer to a barbecue to Bondi Beach.

It’s a big, big country
Growing in the sun
Life is sweet and easy
There’s room for everyone. [3]

At one stage, Gregory Peck reputedly had the film rights, having come across the book while filming On the Beach in Melbourne. Ultimately, a new company was formed linking director Michael Powell and the then mighty Australian theatrical company J. C. Williamsons in a new company, Williamson-Powell Ltd. (4) They’re a Weird Mob started shooting in October 1965, with a budget of $600,000. It premiered in August of 1966. Within a year, it had reportedly grossed over $2,000,000 in Australia alone. However, the nature of the business contracts saw most of these profits go to the (largely foreign-owned) distributors and theatres. The actual production company failed to cover its costs! (5)

Now, more than forty years on, the film has been restored by ScreenSound Australia, as part of the Kodak Atlab Cinema Collection, and released on DVD by Roadshow Entertainment. Part of its fascination is the way it provides a time capsule of that period. There is also the interest in the way the film fits into Michael Powell’s career.

Powell’s characters were usually people of a certain class – army officers, civil servants, university scholars, theatrical performers of high artistic ability. When the “working class” was represented, they were perhaps somewhat indulged and patronised (though never nastily). Yet in Weird Mob, the setting is among a mob of builders, good down-to-earth blue-singlet types. And even his exotic locations – the Himalayas in Black Narcissus (1947), the Hebrides in The Edge of the World (1937) and Canada in 49th Parallel (1941) – have a British sense to them as strong as the England of the Gentleman’s clubs of Colonel Blimp, the pilgrims’ trail of A Canterbury Tale (1944) or the village of A Matter of Life and Death (1946).

Yet, in They’re a Weird Mob he successfully represents Aussie workers – or, at least, he captures – a very appealing facsimile, a bunch of builders who come across as pretty good blokes. In the same way that Powell’s films of World War II successfully depicted an England that was worth fighting Hitler for, here he creates an Australia that we’d like to believe is real. There is a real warmth in the scenes with Joe Kennedy (Ed Devereux) and his workmates. Whether they’re going hunting, finding excuses to put off mowing the lawn for another weekend or having some beers after work, these are blokes comfortable in themselves and supportive of each other. As soon as Nino Culotta (Walter Chiari) is accepted as a mate, they’ll defend him against outsiders no matter what – not that in this film that goes any further than standing up to the man delivering bricks who casts a few aspersions on a wog worker.

A man’s got to prove he’s a man.
And he can in this land that’s shiny and new
… Catch a fish, paint a boat, build a barbecue
A king-sized barbecue.
Now take some big steaks,
The Antipodean man loves meat
Under big blue skies, with the man-sized flies
While the missus shrivels up in the heat. [6]

Powell also depicts other aspects of Australia in a way perhaps only an outsider could do. Of course, there have to be scenes of life-savers on Bondi Beach, shots of the Sydney Harbour Bridge, references to Kings Cross (sorry, Kings Bloody Cross), and even some sort of rubbing in that we’re ‘down under’, but it’s almost as though he can get away with stating the bloody obvious because again there is a sense that he really has fallen in love with these aspects of Australia’s comfortable life.

Nino Culotta (a name which could be translated as Little Johnny Fatarse) is the nom-de-plume of the novel’s writer, and of its main character. He is played with warmth and charisma by Walter Chiari, who was a popular Italian star of the period. Nino is an effective presentation of many of the migrants prominent at that time when they were called New Australians. This was also a period when most Australians were welcoming of these foreigners, but fully expected that they integrate into our way of life as soon as possible. That meant learning what a “shout” is, what it means to swim between the flags and the value of a good beer.

This attitude is effectively communicated in a scene on one of the Sydney Harbour ferries, where a drunk starts harassing an Italian family – and is nonplussed when Nino actually speaks to them in Italian. But he is “punished” for his oafishness by being sent ignominiously into the harbour.

Weird Mob is, of course, about a generation before the rise of multi-cultural Australia and, as such, it fully endorses the values of the time that assimilation was the way to go.

It also reflects another aspect of the values of the time: a woman’s place. Here, it is probably more cringe-inducing for an audience today. It’s through two characters that a clear picture of a woman’s role emerges. Firstly, there’s Kay Kelly (Clare Dunne). Her father, Harry (Chips Rafferty), owns a building construction business – and she is one of the main directors. Fashionably dressed, yes – but feminine (that is, acting like a proper woman)? No. She’s hard, business-like, never a hair out of place, always absolutely in control of all the men on the building site, and of her own actions and emotions.

But then, as she starts to fall for this rather dashing Italian, she is even late for an important business appointment because she went to get her hair done. But this is absolutely approved of – at last, she’s acting like a woman should. Pay attention to your appearance and let the men run the business.

Then there’s Edie (Doreen Warburton), the wife of Joe, Nino’s boss. She knows her place: to look after the men, always have food and beer ready, and not expect too much. Nino, with some European charm, may open the side gate for her to go first, but when Joe simply ignores this and pushes past in front, she takes it with no complaints. What else can you expect from a man?

And the happy resolution of it all is when Kay is brought back to her proper station in life. When she accepts Nino’s proposal, she also takes on the woman’s subservient role. In fact, she even starts to relish it. The complete happy ending is when she breaks the stuffy refined atmosphere at a celebratory engagement gathering with a call of, “Bring out the bloody beer.” That’s what the men want!

Just in case the audience hasn’t got the message this is all reinforced with the song on the soundtrack:

There are other ways in which the film is a time capsule of its period. Many of the support characters were becoming well-known from television – then still a novelty only a decade old. Barry Creyton, one of the stars of The Mavis Bramston Show, an early satirical success, has a cameo as a snooty Kings Cross Hotel clerk. There’s even an appearance by Graham Kennedy as – Graham Kennedy. This scene riffed off the rivalry between Melbourne and Sydney, and in a way that probably made Melbournians accepting of a film so full of Sydney’s attractions.

It’s not a great film, but it is still a very enjoyable one. The Region 4 DVD release is consequently very welcome. It also includes an almost obligatory “making off” extra, except that this one was made for television at the time of the film’s release. Ed Devereux presents this fascinating 55-minute archive film. The film is also available in a Region 2 DVD box-set release, The Powell & Pressburger Collection, but apparently this does not include any extras.

Incidentally, the name of Michael Powell’s long-time collaborator Emeric Pressburger does not appear in the credits of They’re a Weird Mob. However, most accounts indicate that he was involved with the script at certain stages, and that he is credited as Richard Imrie, a non-de-plume he had used the year before for his work on Michael Anderson’s Operation Crossbow (1965).