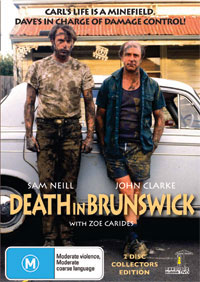 In 1952, non-Anglo-Saxon migrants were such a strange phenomenon that the Australian Government’s Film Division, Department of the Interior, for the Department of Immigration felt the need to sponsor a feature film advocating their acceptance into Australian society. The film, Mike and Stefani (R. Maslyn Williams, 1952), followed the pre-war experiences of its title characters in the Ukraine, war-time displacement and the experiences in the post-war refugee camps. It was constructed so that it was almost pleading for these refugees to be accepted as new Australians, at a time when official attitudes towards foreigners were embodied in the White Australia policy.

By the 1960s, ’new Australians‘ were a more recognisable part of Australian society. They’re a Weird Mob (Michael Powell, 1966) suggested that foreigners could become Australians – as long as they showed they were ready to fully assimilate. Nino Culotta (Walter Chiari) might be a wog, but he showed he could pick up the Australian way of life, from its highly colloquial English to its implicit understanding that a woman’s place was in the kitchen. Powell’s film is still enjoyable, even if its advocacy for assimilation now comes across as somewhat strident.

A generation on, a more prolific Australian cinema was examining the migrant experience and impact from newer perspectives. Michael Pattinson’s Moving Out (1983) wasn’t concerned with assimilation. The dominant value was now multiculturalism. This story of the rites of passage the teenage Gino (Vince Colosimo) is practically a debate between Aussie values as he sees them (Collingwood Football Club, a Fosters and embarrassment at being a wog) and Italian values (especially as embodied in the family.) It ultimately decides the best is to enjoy both cultures – especially if you can jettison the out-dated Australian attitudes represented by Gino’s English teacher, for whom Australian society hasn’t moved on since Dorothea Mackellar wrote My Country.

A decade later, John Ruane’s Death in Brunswick (© 1990, released 1991) reflected a more relaxed, but an even more multifaceted image of a now ethnically complex society. Greeks and Turks, Christian (Catholic and Orthodox) and Moslem are all part of a mix. And, at least in the inner-Melbourne suburb of Brunswick, ethnicity doesn’t seem to be part of any problem. People just are who they are, and to call someone a slope or a wog doesn’t carry any pejorative overtone (or undertone). It’s just as descriptive (and possibly even as affectionate) as calling your redhead mate Bluey. This was a harmonious multi-cultural community before John Howard’s Culture Wars damaged this delicate fabric.

Working from a 1987 first novel by Boyd Oxlade (1), Ruane exploited this rich social fabric in his first feature film. From its commercial spine of Sydney Road to its mix of crumbling terrace houses and bland blocks of flats, this is a living community, a fusion of individuals who are just ordinary people, but who bring a rich cultural and ethnic baggage into their neighbourhood.

Carl Fitzgerald (Sam Neill) is a loser. Life has served him up a lot of strikes. He has a mother who is really only concerned that Carl is decent and nice, he hasn’t seen his daughter since his wife moved into a lesbian relationship, and when he gets work it’s in the grungiest kitchen in the most rundown Rock Club in the suburb. But at least the kitchen does provide a good supply of cockroaches when he needs to make his boss a special pizza!

Sam Neill was cast against type and came from a $30,000,000 Hollywood movie, John McTiernan’s The Hunt for Red October (1990), to this small production, made with a budget only about a tenth of the blockbuster. But the casting is a triumph: Neill shows a talent for deadpan comic timing he has rarely had a chance to use in other films. Whether it’s Carl’s terrified fear of best mate’s very liberated wife, June (Deborah Kennedy), or his objective interest in who farted when he and Dave (John Clarke) are lugging a body into a cemetery in the middle of the night, Neill provides the film with a very important contact point for its audience.

This is important because basically the ingredients of this story shouldn’t work. Carl, the protagonist, is so negative: mother dominated, relying on pills or a drink to get through his day; any career he was going to have as a chef has well and truly gone down the gully trap. About his only positive trait is that he is honest enough to see himself as a loser. And he kills a person. Mustafa (Nick Lathouris) may have been a petty drug pusher, but the film denies Carl the possibility of justifying this act, by introducing us to Mustafa’s wife and boy. Mustafa’s wife (Huriye Balkaya), hajib-wearing and having to rely on her son to translate for her, reminds us that Carl has been responsible for the death of a man. We become complicit in a very adroitly droll scene where Carl and Dave get rid of the body by putting it into a grave a few hours before a genuine burial is scheduled.

(In Germany, Brunswick has a different significance, and when the film was released there, its distributors felt the original title was not appropriate. They retitled it, with a riff on this very funny graveyard sequence. It is the Di Marco grave that has been opened, so the late Mrs. Di Marco’s newly deceased husband can be buried with her – leading to the new German title, Gesellshaft für Mrs. Di Marco (Company for Mrs Di Marco). Some years later, a real-life incident rhymed with this, when a man missing for some years was found buried in another person’s grave near Melbourne, the victim of a petty underworld murder.)

Part of the success of this film is due to the talent Ruane assembled. Carl’s best mate, Dave, is played by John Clarke. Sam Neill and Clarke were friends at University, and their playing together is sparked by looks and glances that reveal so much. Clarke, an original satirist in his own right, is a very effective foil for Neill.

Zoë Carides, as the barmaid who falls for Carl when perhaps she only wanted a bit of sex, is another important element. The scenes between the two are effortlessly sustained, with a depth to their characters emerging in a glance, an eyebrow, a casual gesture.

The contribution of production designer Chris Kennedy is also very important, in creating the sense of a real suburb. Authentic locations are used effectively. (Disclaimer: The “hardware” store where Carl gets a ladder is actually the Pet Shop where I’ve bought my pet food for many years, ably transformed with a large hammer sign and few hardware items out front.) The commentaries reveal that Carl’s house and the Rock Club’s kitchen are sets, and their impact is even more impressive. These have the real grime and scunge that they should have. Wallpaper peels with damp and neglect, cockroaches and grease dot the kitchen. They represent and reflect Carl almost as vividly as Neill’s performance.

It is good to have a DVD release of this very enjoyable film, a film reflecting the stage that Australian ethnic values had reached before the onset of the Howard regime. Umbrella Entertainment has released it as a “2 Disc Collectors Edition” in a transfer that does justice to Ellery Ryan’s cinematography and Philip Judd’s excellent music score. The ubiquitous ‘making-of”, Memories of Murder, is better than many of these, with some interesting insights into the genesis of the project and its making. In fact, this 48-minute feature makes the two commentaries largely redundant.

One is with director John Ruane and cinematographer Ellery Ryan. The other features the two leads, Sam Neill and John Clarke. This could have been expected to have been more entertaining, but is rather lacklustre, the problem of unprepared commentaries when the people delivering them are watching the film for the first time in a number of years. Clarke and Neill are better served by the inclusion of two programmes made for New Zealand television around the time they were filming Death in Brunswick, focusing on them as examples of New Zealand expatriate talent.