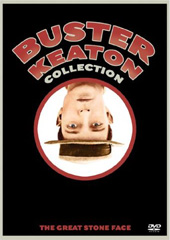 Joseph Francis “Buster” Keaton is one of those filmmakers whose work made such an enormous impact on screen comedy, every aspect of his cinematic contribution is worth examining. His first silent films as apprentice to Roscoe “Fatty” Arbuckle offer the earliest glimpses of his developing genius. His own short comedies, including One Week (1920), Cops (1922), and The Balloonatic (1923) are filled with truly incredible ideas. And certainly the feature length films, from Sherlock Jr (1924) to The Navigator (1924) to The General (1926) to Steamboat Bill, Jr. (1928) are among the finest motion pictures ever made.

Long after producing such timeless classics, Buster Keaton joined the prestigious Metro Goldwyn Mayor (MGM) studios and proceeded to become a mere cog in a movie making machine. Unlike Charlie Chaplin or Harold Lloyd, who eventually owned their films outright, Keaton was a working actor who laboured within the studio system. Once his production facilities moved to the prestigious MGM studios in 1928, he found himself trapped in the throes of an anti-creative establishment. By the time talking pictures eclipsed the silent cinema, Keaton was being shunted into films like the inappropriate Parlor, Bedroom and Bath (Edward Sedgwick, 1932), a farce that was hardly akin to a genius of physical comedy. Struggles for independence and creativity continued, peppered with debilitating alcoholism. By the time he co-starred in a string of MGM features opposite the bombastic Jimmy Durante, Buster’s drinking was showing up in his performances. It would be likely that he remembered nothing about his final MGM feature, the 1933 poorly dated prohibition misfire What, No Beer? (Sedgwick, 1933).

It was 1939 when Keaton finally landed in the short subjects department of Columbia Pictures, after a stint doing two-reelers at Educational Pictures and some uneventful freelancing. Headed by Jules White, the Columbia comedy shorts specialized in the violent slapstick of The Three Stooges or the rural comedy of Andy Clyde. Buster Keaton was the sort of former superstar whom White enjoyed saving from oblivion (Charley Chase and Harry Langdon are among those who found refuge in Columbia shorts, as did former Keystone comedian Clyde). Keaton had worked with Jules White on the MGM feature Sidewalks of New York (White and Zion Myers, 1931) where, according to Keaton, he was told how to walk, how to talk, and how to be funny. He later condemned it as the worst film in which he’d appeared. However, by 1939, with his career at such a low ebb, Buster could not be choosy. He starred in ten Columbia comedy shorts from 1939-1941 for Jules White’s unit.

These ten comedies have been released on DVD in a very nice package, the films having been mastered from pristine 35mm originals. And, despite their reputation, there are a number of worthwhile moments. The acrobatic bit with boisterous Elsie Ames in The Taming of The Snood (James White, 1940), the delightful dance routine with Lorna Gray in Pest From The West (Del Lord, 1939), and the shining example of Buster’s ability to subtly draw great comedy from situations in Pardon My Berth Marks (White, 1940) make this two-DVD set worthwhile. It would seem that the work of any great artist that exists should be made available and accessible to the masses, even if it does not match his best efforts. The Civil War comedy Mooching Through Georgia (White, 1939) is nowhere near the level of The General, but it is fun to see Buster on such familiar ground. There are a reasonable number of worthwhile moments in So You Won’t Squawk (Lord, 1941) and She’s Oil Mine (White, 1941), while His Ex Marks The Spot (White, 1940) shows Buster playing nicely within an ensemble, and Nothing But Pleasure (White, 1940) allows him to recreate a few bits from his silent pictures. Perhaps the only really weak effort in this collection is the dull scare comedy The Spook Speaks (White, 1940), as it relies on the sort of simple, predictable gags that Buster so carefully avoided in earlier years.

Keaton himself was very dissatisfied, stating in his autobiography that after his contract was up in 1941 he vowed not to make “another crummy two-reeler” for the company. But the fact that these films may have suppressed his true creative prowess, they nevertheless were able to draw enough to make them a welcome addition to the scholarship of screen comedy. Buster Keaton’s Columbia short subjects may not be at the level of his silents, but to dismiss them so completely as to not celebrate their availability would limit us from further study of a fine comedian and filmmaker’s complete legacy.

Special features on this two-disc set include a documentary, audio commentaries by a myriad of historians, and a copy of the script for She’s Oil Mine, Keaton’s final Columbia short. One trifling quibble – the films are not presented in chronological order.

Towards the end of his life, Keaton was relegated to everything from industrial films to television commercials. He made frequent TV appearances until, finally, a resurgence shortly before his death in 1966 reminded everyone of such classics as The General and Steamboat Bill Jr. 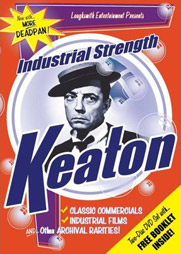 It is this period late in Keaton’s life that is collected on Industrial Strength Keaton, another two-disc DVD set, this one produced by Laughsmith Entertainment Inc. The industrial films (some of which are shot in colour) offer especially interesting glimpses of Keaton’s creativity during his later years. While the very sub-genre will conjure up images of dull informative presentations, Keaton makes all of this material interesting by placing himself within the context of the presentation and deriving as much as he can from each film. Going into advertising with this same attitude, Buster elevates television commercials for everything from indigestion medicine to candy bars to beer. These advertisements come off as minute-long short comedies featuring a master of slapstick. Several appearances from various TV variety shows of the 1950s show Buster recreating a sequence from his first film opposite Arbuckle, The Butcher Boy (Roscoe Arbuckle, 1917). The variations on this same sequence are astounding (the best is, arguably, the routine with Billy Gilbert on a 1957 appearance). These are kinescopes, so the quality varies. Finally, the collection digs up nice prints of two of Keaton’s least interesting features, MGM’s Parlor, Bedroom and Bath and the independently produced An Old Spanish Custom (Adrian Brunel, 1935).

Of course academics have a tendency to dismiss this area of Keaton’s career as mere slumming, while uncritical movie buffs act as apologists even for Buster’s embarrassing appearances in the beach party pictures of the 1960s (fortunately Industrial Strength Keaton spares us from Buster’s woeful cameos in How To Stuff A Wild Bikini [William Asher, 1965] or Pajama Party [Don Weis, 1964]). However, his contributions even at the level of TV commercials and industrial films have real interest based on the magnitude of his noted classics.

Industrial Strength Keaton and the Buster Keaton Collection, featuring his Columbia two-reeler output, are recommended DVD sets, especially for students of movie comedy. Just like his screen character, comedian Buster Keaton’s resilience in rising above his troubles and remaining active to the end of his life is truly inspiring. The evidence is all there.