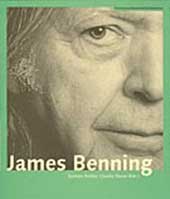 If I am going to make up my history let me make it up the way I want to. If you criticize that, you have to criticize all history not just mine.

How and when does one summarise an artist’s life? Who determines his or her contribution, and to what end? These questions were on my mind as I read through James Benning, the first monograph on the Milwaukee-born experimental filmmaker, published by the Austrian Film Museum. Together with a growing number of career retrospectives – including one at the Museum in November last year – it serves to cement Benning’s legacy within the medium.

Perhaps the most elusive of filmmakers to have emerged from the 1970s American avant-garde, James Benning came to film in his late 20s while working as a schoolteacher and community organiser. In six thorough chapters, editors Barbara Pichler and Claudia Slanar trace a path from his working-class beginnings and discovery of the medium in the early 1960s, to his time in New York a decade later, and, finally, to his 1987 move to California and subsequent establishment as the pre-eminent landscape filmmaker of the American West.

To those only familiar with the austerity of his more recent work, such as 13 LAKES (2004) or TEN SKIES (2004) (1), the complexity and breadth of his oeuvre – optical printing, structural formalism, experimental narrative, diary-based confessionals – may come as a surprise. The editors point out, however, that this resistance to categorisation reveals why Benning, who cites the artist Robert Smithson as his biggest influence (2), has thus far managed to escape canonisation within the annals of film history. Then again, at the peak of his career at 65, he may simply qualify as a late-bloomer.

Either way, it is a perfect time for looking back at Benning’s oeuvre. As Scott MacDonald writes, his recent work embodies “an epitome, a quintessence of his career” (p.218). It is worth mentioning that “looking back” is something Benning himself has done periodically; reshooting (One Way Boogie Woogie/27 Years Later [1977/2004]), revisiting (North on Evers [1991], casting a glance [2007]) and even reusing (8 1/2 x 11 [1974], 11 x 14 [1976]) footage from earlier works. This kind of parallel is not lost on the editors of James Benning, which is noteworthy not only for being the first book to tackle the scope of his career, but also for its thoughtful formal conception.

Rather than produce a monocratic, “absolute” history, Pichler and Slanar have drawn inspiration from the fluidity of Benning’s own creative practice, making room for multiple voices and interpretations, cross-referencing, and critical reassessment. Interwoven with their entries (with excellent translation by Eve Heller) are 11 contributions by critics, theorists, artists, and Benning himself. It is a risky move: stories, ideas and quotations are repeated throughout the various texts, which can bring a close reader to the edge of exasperation. Yet ultimately, the effect is more echo and reiteration than redundancy, drawing us into a deeper understanding of the artist’s life’s work. Just as in a Benning film, attention is rewarded.

Broadly stated, Benning’s concerns are perception and place. In 37 films over the past 36 years, he has executed a series of investigations into these ideas, tracing the reverberations of personal and social histories onto the American landscape, and, in the process, honing a distinct individual aesthetic. While he draws his inspiration from natural and built environments almost exclusively within the borders of the United States, for the last decade his most ardent supporters have been found in Europe. Audiences there not only flock to his screenings but, thanks to an arrangement with German television, may also encounter his work in the comfort of their own living rooms (3).

A good deal has been written by and about Benning over the years, and this is well catalogued here by Pichler and Slanar. Additionally, the editors draw on a series of interviews they conducted with Benning in 2006. Part of artist and writer Julie Ault’s essay reads like a literature review, complete with useful summaries and exhaustive citations. MacDonald, the greatest single contributor to Benning’s bibliography to date, offers his characteristic insight into two of the filmmaker’s recent films. Benning’s own contribution underscores the intimate, personal nature of his process. Together with the book’s numerous stills, biographical timeline, filmography, bibliography, and list of exhibitions and screenings, these texts ground the book as an authoritative resource (4).

Pichler and Slanar have also taken the opportunity to bring attention to areas of Benning’s practice that have been largely neglected to date. There is valuable discussion of Benning’s generally inaccessible early work (e.g. Time and a Half [1972], Art Hist. 101 [1972], Honeylane Road [1973]), as well as an illuminating chapter on his tentative foray into the world of fine art. In addition, Slanar devotes several pages to his collaboration with filmmaker Bette Gordon, with whom he made three films between 1973 and 1975. As Slanar points out, Michigan Avenue (1973), i-94 (1974) and The United States of America (1975) are fascinating in their ability to support seemingly divergent readings: Gordon’s feminist politics and Benning’s exploration of “processes of perception” (p.20).

In 2005 I came to the California Institute of the Arts (CalArts) to study with Benning, thoroughly inspired by my encounter with his “California Trilogy”: El Valley Centro (1999), Los (2000), and Sogobi (2001). Each film is 90 minutes long, made up of 35 two-and-a-half minute static shots taken in and around Los Angeles. Ault, who had the same introduction, observes in the Trilogy a central conundrum of Benning’s work:

The films stimulated viewing as concentrated drifting, and made for aesthetic and surprisingly emotive experiences. I realized that while initially they appeared to be cool, formal, perhaps even detached, they also bespeak the inverse, demonstrating impassioned art-making. (pp. 90-91)

Dualities are present in every Benning film, finding expression in tension between political indignation and reverence for natural beauty (Four Corners [1997], UTOPIA [1998], the Trilogy), humour and formal rigour (The United States of America, One Way Boogie Woogie), male and female personas (Grand Opera. An Historical Romance [1979], Him and Me [1981]). Throughout, there is an overarching aspiration to reconcile highly personal narratives with larger contexts – be they physical, political, or historical (5). In Circling the Image, Reinhard Wulf’s 2003 documentary portrait of the filmmaker, Benning reflects:

The hard part about making personal work is not to make it one man’s problem. Not to make a film that just refers to my own grief, who cares about that? […] That’s what I think a personal film has to do. It has to show a trust but then it has to become much more meaningful than just what that story is about. You know, it has to be bigger.

Pichler and Slanar pay homage to the multiple dimensions of Benning’s practice in their selection of contributors. Academic essays by Nils Plath and Volker Pantenburg contrast with the more personal reflections of Michael Pisaro, composer and Benning colleague at CalArts, and the filmmaker’s daughter, renowned video artist Sadie Benning. Midway through the book, Dick Hebdige’s prose gives Benning and his work a refreshing immediacy (6). Photographer, friend and collaborator Sharon Lockhart, whose photographs of beer bottles from Benning’s collection feel a bit non sequitur, offers a brief text whose reverence for Benning mythology is happily countered by Allan Sekula, another photographer, theorist, and CalArts colleague, whose contribution at the end of the volume reads as a pleasantly droll post-script.

Certainly, Benning has acquired a yogi-like following over the years. (I might mention that his weathered face and mysterious, Mona Lisa-smile adorn the book’s cover.) His meditative works have inspired references to spirituality and even “magic” (7). It is left to a former classmate of mine, artist and writer Amanda Yates, to shed light on these qualities. Her essay offers a clear-eyed consideration of Benning as an educator (8), whose work, she writes, “is about participation in the material world” (p.159). After enrolling in his signature “Looking and Listening” course, wherein Benning escorts students to different industrial and natural sites around Los Angeles to observe, unburdened by cameras or pencils, Yates shares her own revelation with her instructor:

I told him that I thought his classes were his “real” work, and that his films were just documentations of his process. James laughed and thought about it for a while, then said, “Yeah, I think so too”. (p.159)

James Benning is an insightful, intimate portrait of a filmmaker and his practice. The book’s unconventional approach and well-conceived execution serve its subject well. The volume ends with Sekula’s discussion of RR (2007), perhaps Benning’s last film. He has said he can no longer justify his longtime allegiance to 16mm, based on practical and economic concerns, and is planning to switch to high-definition digital video (9).

The aesthetic of the filmed image has certainly been vital to his work thus far. But before the purists cry mutiny, consider what Pichler points out in the second chapter of the book: that it is the cohesion of Benning’s oeuvre that is so transfixing. Already in the mid 1970s, “[v]isual and formal preferences established in his earlier films are further developed and from this point on thread through the entire body of his work in various permutations” (p.21).
As diverse as his approaches have been, there is a remarkable unity to James Benning’s body of work. One idea leads to the next with the same elegance as a mathematical proof – something Benning, who holds a Master’s degree in mathematics, would surely appreciate.