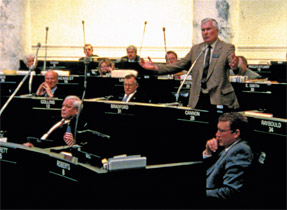 Let us go then, you and I,
When the evening is spread out against the sky
Like a patient etherised upon a table ….

They are the only evidence of lives locked away, sometimes for decades: more than 400 suitcases, trunks and other containers yielding such simple treasures as items of clothing, a starter pistol, books and tableware. From this odd collection of the remnants of discarded lives, organisers have fashioned an exhibit traveling throughout the United States that documents the lives of nine former patients of the now-shuttered Willard Psychiatric Center in New York State.

While exploring the website for the exhibit (1), I couldn’t help thinking of the record of another group of afflicted, forgotten Americans, people whose notion of citizenship was severed from them with the suddenness of an umbilical cord cut at birth. They were patients at the State Prison for the Criminally Insane at Bridgewater, Massachusetts, USA. A society that didn’t know what else to do with “those people” routinely shut them away in such warehouses. We might expect to see institutions like these in Nazi Germany during World War II, but in the United States in the 1960s?

We would not know about places like Bridgewater if not for Frederick Wiseman, America’s greatest documentarian. His Titicut Follies (1967) exposed the barren house of horrors that was Bridgewater and launched a career that has focused on just that: revealing segments of a culture many wanted hidden or ignored. Wiseman has fearlessly trained his lens on dozens of American institutions in such films as Hospital (1969), High School (1968) and High School II (1994), Domestic Violence (2001) and Domestic Violence II (2002), Welfare (1975), and Public Housing (1997). In all of them, his camera’s fixed gaze becomes the viewer’s. Wiseman pulls back the curtain so we can watch as ordinary citizens (and some not so ordinary), cope with bureaucracies, public officials, their own worlds (as in Model [1980] and La Comedie Francaise [1996]), fellow citizens and ultimately, themselves. Wiseman’s every frame reminds us that surrounded by so many people, his human subjects remain very much alone.

Here is Robert Coles, the Harvard University child psychiatrist, in The New Republic:

After a showing of Titicut Follies the mind does not dwell on the hospital’s ancient and even laughable physical plant, or its pitiable social atmosphere. What sticks, what really hurts is the sight of human life made cheap and betrayed. We see men needlessly stripped bare, insulted, herded about callously, mocked, taunted. We see them ignored or locked interminably in cells. We hear the craziness in the air, the sudden outbursts, the quieter but stronger undertow of irrational noise that any doctor who has worked under such circumstances can only take for so long. But much more significantly, we see the “professionals”, the doctors and workers who hold the fort in the Bridgewaters of this nation, and they are all over… Titicut Follies is a brilliant work of art….

In most of Wiseman’s work, his subjects – the wretched as well as the institutions that sustain their wretchedness – are routinely stripped bare emotionally, socially and personally. We see the daily rituals and processes they must endure to get to tomorrow. We watch as disappointment rains upon disappointment, and occasionally, we see joy, if only in the absence of yet another heartache. We see souls that have rarely known buoyancy.

In his latest film, State Legislature, the 105-member Idaho legislature is splayed on Wiseman’s examining table under a searing light. The film is a rich and solemn beholding of a world not so much ignored or forgotten but taken for granted. Unless we have an interest in a specific piece of legislation, or are a lobbyist, or a journalist covering the arena that has been likened to watching sausages being made, the legislative process for most is automatic, like electricity.

As in his other work, Wiseman shot State Legislature on 16mm film. The final product was edited from 140 hours of footage over the course of the legislature’s three-month session in 2004. When they’re not making sausage, Idaho’s lawmakers are ranchers, educators, business owners: commoners. But during the three-month session, they take on a life few outside the statehouse would understand. It is a life of power, influence, homespun, corn-fed muscle and deal-making, populated, surprisingly, by people who at some point must stop talking and listen.

I’ve often wondered how the viewer determines when Wiseman’s subjects are playing to the camera and when they’re ignoring it. We see, for example, few of the dissonances that are inevitable when lawmakers hash out such issues as water rights, second-hand smoke in restaurants and bars, illegal immigration, organ donation, video voyeurism, utility deregulation, regulating cattle for mad cow disease, mandatory kindergarten, insuring citizens’ rights to speak before local school boards, disposing of electronic waste (computers, cell phones, etc.), and crime victims’ rights. Even though this is a part-time legislative body, there is no shortage of politically correct legislative-speak, as when a lawmaker uses buzzwords like inclusion and values, suggesting only that the argot of political correctness survives both inside and outside the statehouse. Wiseman shows us moments of frightening honesty, too, as when Bruce Newcomb, the speaker of the House and a rancher, speaks to a group of school students on a tour of the statehouse about the legislative life. “Anybody can do what we’re doing”, he tells the youngsters, who are sprawled, some barely awake, on the rotunda floor.

Wiseman’s omnivorous camera captures the minutest detail. We see pages collating legislation, a young janitor pushing a broom, a receptionist waiting to receive a visitor. In one scene, a child in a wheelchair waits in the great rotunda. Is he a tourist? A patient whose treatment depends on the actions of the legislature? We don’t know, but his presence is no less compelling. These and recurring scenes of tourists, children singing carols and lobbyists (one of whom demonstrates a tiny robot for a polite lawmaker oblivious to the gadget) enhance continuity and remind us that, despite their claims to power, the lawmakers of Idaho are just plain citizens nine months of the year. This fallible, down-home familiarity is best captured in a moment when a committee chairwoman introduces a lauded Congressional Medal of Honor winner, Ed Miller… except that his name is Freeman. Mr. Freeman smiles broadly nonetheless. Elsewhere, Ed Lodge, a lobbyist for the state lodging and restaurant association, earnestly and without a hint of irony asks the lawmakers not to pass a bill blaming his clients for the obesity that might result from eating unhealthy, fatty meals. As the wise man said, you couldn’t make this up.

In one memorable shot halfway through the film, Wiseman captures the statehouse reflected in a glass office building. For 40 years, his films have, in a kind of subjective objectivity, shown an America to a world that in many ways knows America better than we Americans know it. The statehouse in the glass office building seems directed at Americans who have turned a blind eye to its institutions, processes and social rituals. We in America are too close to these things. We are like the Germans who lived near the Nazi death camps who claimed that they knew not what went on down the road.

The French mystic and philosopher Simone Weil wrote eloquently of the spiritually afflicted, how compassion for them “is an impossibility, a miracle akin to walking on water, healing the sick or raising the dead”. Most of Wiseman’s work, just as eloquently and through the persistent but dispassionate eye of his camera lens, records affliction in many forms, and in recording it, leaves it to the rest of us to relieve it. In some ways, the lawmakers in State Legislature and the people who jockey for their attention form another, bereft community in search of relief: people who seek democracy and want to make it the one part of their lives that relieves (or perhaps tries to avoid) the affliction brought on by the rigours of daily life. One wonders if any of the legislators in the America’s 50 states, Washington, D.C. and Houses of Parliament across the globe have the human capacity to recognise fully what the business of a legislature really is and what lawmakers can – and cannot – accomplish. In his remarks to the students in the rotunda, Mr Newcomb, the Speaker of the House, tells the future recipients of the laws being debated throughout Frederick Wiseman’s spacious, wise and riveting film: “We have to live with what we did to ourselves”.