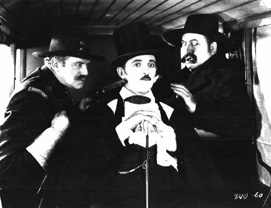 If one can imagine a figure that combines the sartorial savoir faire of Max Linder with the gymnastic grace of Buster Keaton armed with a gag-executing dexterity that appears as effortless as his tailoring, then you have some sense of the salient characteristics of the now largely forgotten silent comic Raymond Griffith (1895–1957). Sadly, most people know about him in the most casual fashion for his cameo appearance as a slowly expiring French solider who cohabits a foxhole with Lew Ayres’ unworldly German recruit in Lewis Milestone’s All Quiet on the Western Front (1930), his final screen appearance. Or for the fact that his career collapsed with the rise of sound due not to the inappropriateness but instead the long-standing near inaudibility of his speaking voice.

As a young boy, Griffith played a role in the stage production The Witching Hour (1915) that required him to scream in terror as he was threatened with a beating. Repetition and, perhaps, an undue decree of competence led to the virtually complete defeat of his vocal chords. Silence did not, therefore, so much provide the appropriate venue for his performing skill but the only platform whatsoever. Forced to put acting aside, he joined the circus, where he must have honed his physical dexterity, worked as a dancer and, after a tour of duty in the navy, came West to California in 1914. Soon, thereafter, he was attached to the film community, more as a writer than performer, and worked for Mack Sennett from 1916–21. He then returned to performing before the camera, including an appearance as a con artist in Tod Browning’s The White Tiger (1923). He landed a contract with Sam Goldwyn, and while most of his work for the legendary producer was in the dramatic mode, he typically laced his performances with a light-hearted tone.

Production schedules of the time proceeded at a breakneck pace, and Griffith racked up more than 15 appearances during 1924 and 1925. Sadly, many of the films are now lost, so we have to turn to contemporaneous reviews to conjure up how Griffith’s insouciant manner caught the public’s interest as he could steal scenes through his nonchalant manner rather than foisting his character upon the audience’s attention. His efforts took hold, and Griffith began to acquire leading roles.

The brief period of his ascendancy owes a great deal to the capable direction of Clarence Badger (1980–1964), another forgotten figure from the silent era. An artist and newspaper reporter before he entered films, Badger worked for Sennett from 1915–17, coinciding with Griffith’s tour of duty at the studio. He emigrated to the employ of Goldwyn, and helmed projects featuring Will Rogers and Mabel Normand. Best known of his many credits, and one of the few readily available to present day viewers, is It (1927), starring Clara Bow.

Clearly, Badger and Griffith must have crossed paths more than once, and their mutual interest in more refined comic styles made them compatible collaborators. Two films emerged in due course, and, both remarkably and lamentably, they are two of the few films that still exist to represent the work of these estimable individuals. In Paths to Paradise (1925), Griffith portrayed the “dude from Duluth”, a well-tailored con artist, who steals a diamond from its owner and then grapples with fellow miscreant Betty Compson to keep the loot from one another (suggesting shades of Lubitsch’s Trouble in Paradise [1932]). The picture launched Griffith’s brief arc as a star, and led to Hands Up! (1926).

Two elements immediately stand out about this delightful and deft comedy. First, the production possesses the kind of attention to detail and concern with generic parameters that is evident in many of Keaton’s films, most notably The General (Buster Keaton and Clyde Bruckman, 1927). (As the opening title states, “An historical incident, with variations.”) Like that picture, Hands Up! is set during the Civil War and even incorporates an opening scene that brings in Abraham Lincoln, who enlists the aide of Captain Logan (Montagu Love) to transport an invaluable shipment of gold from its Western point of origin to the nation’s capital in order to help finance the on-going armed conflict. Simultaneously, Griffith’s character is recruited by Robert E. Lee to waylay the booty. Badger plays the period details straight along with the physical imperatives of the Western, including a chase sequence between a stagecoach and a band of Native Americans employing well-crafted travelling shots.

Inevitably, the other outstanding element is Griffith himself and the manner with which he draws attention to his character through the least frenetic exercise of comic energy. Often Griffith acts as the still centre about which gags occur, setting up comedic byplay in a virtually self-effacing manner. He does not descend to double-takes or coarse pratfalls. Dressed almost surrealistically in top hat and tails in the midst of cowpokes and conscripts, his character occupies the sagebrush with the kind of inadvertence that would occur if a nun appeared at the storming of the Normandy beaches. A noteworthy set of gags that play upon Griffith’s audacious insouciance arise when he is being lined up for execution as a spy by the Union troops and inadvertently comes into possession of a picnic basket. As the troops point their weapons, Griffith holds one dish up after another, as if participating in a vaudeville act. The men shoot these items to bits instead of their intended target. A later moment of sarcastic savoir faire takes place when Griffith is led into a gold mine and lights his way by attaching a candle to the lid of his top hat.

The gender dynamics of Hands Up! also call Keaton to mind, as the two female protagonists, played by Marian Nixon and Virginia Lee Corbin, convey some of the ditsiness of the Great Stone Face’s paramours. Griffith’s character finds himself equally attracted to both of them. Rather than being forced to make a choice of the heart, he chances upon Brigham Young in the final scene, and leaves with both women for Salt Lake City and a polygamous resolution of the plot. Try that gag a few years later in the wake of the Production Code!

With the advent of sound, Griffith switched to the other side of the camera, and for the course of the 1930s worked first at Warner Bros. and then at Fox as a producer. His credits include some notable features, including Barbara Stanwyck’s taboo-busting Baby Face (Alfred E. Green, 1933), Rowland Brown’s oddball crime drama Blood Money (1933), the Shirley Temple films directed by Allan Dwan – Heidi (1937) and Rebecca of Sunnybrook Farm (1938) – and John Ford’s Drams Along the Mohawk (1939). He retired in 1940, dying in 1957 of a heart attack after choking on some food.

In contrast to Griffith’s ultimate fate, Hands Up! goes down with all the effortless ease of a well-mixed cocktail. Walter Kerr and others have championed for the inclusion of Griffith in the pantheon of silent laugh makers, and this film abundantly illustrates his comedic sense of perfect pitch. He consolidated, if only for a too brief a time, a persona that jostled the funny bone without insulting the intelligence.