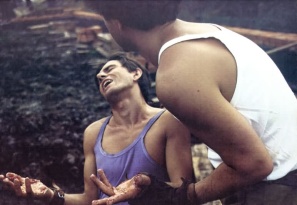 In Poland art fulfils a special function… it carries a certain burden of tradition through the fact that for a hundred years the state did not exist, or it existed only in literature, in art, to which everyone could refer.

The career and body of work of Andrzej Wajda presents a diametrically opposed paradigm to that of his fellow countrymen such as Roman Polanski and Jerzy Skolimowsi. These other directors addressed the concerns of a generation who came to maturity after World War II (and often centred on contemporary, alienated and insular youths [2]), and their career trajectories seemed designed with at least one eye on filmmaking in Western Europe and the United States. Wajda, by contrast, has from the first, remained a distinctly Polish director. That is, he has continually sought to explore specifically Polish stories and concerns, often delving into his country’s recent, wartime and post-war, past. The Polish critic Jerzy Plazewski puts it thus: “Wajda’s international career isn’t about being able to make movies like Spielberg or Altman, but making movies that could only be made in Poland and about Poles” (3).

Thus, the director who saw the style of the new Polish cinematic school he helped to pioneer (when a more liberal climate prevailed as the Stalinist “thaw” began in 1956) reach an end with films like Knife in the Water (Roman Polanski, 1962), The Saragossa Manuscript (Wojciech Has, 1964) and Walkover (Jerzy Skolimowski, 1965), continued to be the voice of Polish cinema throughout the 1960s and 1970s (4). In diverse films such as Lotna (1959), which centres on a Polish cavalry holding out against the German Blitzkrieg in 1939, Ashes (1965), set during the Napoleonic wars, the piercing Landscape After Battle (1970), about Polish post-war displaced persons, and the stylised, allegorical The Wedding [1973), Wajda’s concern remained almost exclusively with the weight of Poland’s historical, cultural and artistic heritage.

Wajda’s career has, then, remained largely constant in terms of his abiding interest in the Polish experience (excepting the 1980s, when political repression and Martial Law forced his quasi-exile in Western Europe). However, against this commonality, his filmic style has developed and transformed quite markedly. Some commentators have bemoaned what they regard as an overwrought technique in his work, and it is true that his films of the late 1960s and 1970s feature increasingly fragmented, probing narratives and expressionistic, often self-reflexive cinematography. Attendant upon and consonant with this overt art-cinema façade went an interest in the politics of representation, in particular the dichotomous nature of film and reality. It is this strain of Wajda’s career that is best exemplified by Man of Marble.

The crux of Man of Marble can be found earlier in Wajda’s career. In 1968 he made a film entitled Everything for Sale, which traded heavily on his own oeuvre. It tells the story of a director trying to continue his film after the mysterious disappearance of its star (modelled on the real-life death in 1967 of the “Polish James Dean”, Zbigniew Cybulski, star of Wajda’s own Ashes and Diamonds [1959]); and, as David Thomson has noted, it is “as centred on the nature of film as… Eight and a Half, Blow-up or Persona” (5). It was clearly a very personal meditation for Wajda. So much so that eight years later he abstracted its central interest and impetus in the politics of filmmaking, and applied it to a much broader, more panoramic canvas. And that canvas came in the shape of a screenplay that had been written by Aleksander Scibor-Ryiski a full twelve years earlier but that had been suppressed by the communist authorities, one much more in keeping with the themes that have constantly driven his career.

That Man of Marble should be made in 1976, at the precise historical juncture between “The lingering repressions of communism and the emerging disgruntlement of the solidarity movement”, feels ideal, and feeds directly into its discourse on documentary practice and censorship. Indeed, it is only one example of a trend in Polish films from this time, one that has been termed the “Cinema of Moral Concern”. Other titles within this “movement” include Wajda’s Rough Treatment (1977), Krzysztof Zanussi’s satirical Camouflage (1976), Agnieszka Holland’s Provincial Actors (1979) and Krzysztof Kieslowski’s The Scar (1976). In these films the individual’s relationship to the state is paramount, and the particular structure of Man of Marble elucidates this idea perfectly. Its investigative structure is, of course, reminiscent of Citizen Kane (Orson Welles, 1941) and The Mattei Affair (Francesco Rosi, 1972), another masterpiece by a director who could well be argued to represent for his country, Italy, what Wajda does for Poland. One instructive difference, however, pervades the nature of Wajda’s as opposed to Welles’ and Rosi’s narratives: the fact that Charles Foster Kane and Enrico Mattei exist as the all-powerful, all-pervasive, almost mythic makers and manufacturers of images within their hermetic worlds. Birkut, the titular marble man of Wajda’s film, exists in contradistinction in that he remains an object of a controlling discourse that shapes and distorts perceptions of his life and work.

At the heart of Man of Marble, then, is a denunciation of the Stalinist/communist practice of social-realist documentary filmmaking that served grossly manipulative and misleading propagandistic goals. Indeed, Wajda himself had to suffer this same ignominious fate, and acknowledges as much by inserting his own name into one of the newsreels watched by the young director early in the film (6). This dichotomy is succinctly alluded to in the opening scenes of Man of Marble. An initial, triumphalist montage of rapidly cut black-and-white shots of Birkut gives way to a long, hand-held take, in colour, following Agnieszka arguing about her proposed thesis film. Quick cuts of different times, locations and actions are thus contrasted with an extended shot in continuous space and time, whilst images of artificial immobility (such as Birkut’s statue and photograph, and him posing beside them) are succeeded by a forceful presentation of dynamic movement as Agnieszka storms through a corridor and, afterwards, drives in a van through the city under the film’s credits. Wajda here is not simply demarcating visually the various spatio-temporal diegetic levels within Man of Marble. He is also alluding to the exploration of representation and the nature of filmic images with which his film will hereafter be concerned.

This particular discourse on construction (of stories and images) resonates throughout Man of Marble. The Stalinist newsreels construct one vision, whilst Agnieszka wishes to counteract this by building a composite picture of what she deems the truth. Within the newsreels there is further construction – specifically the designed haven of Nowa Huta, which was built by the communist authorities as a riposte to what was seen as the bourgeois traditionalism of Krakow. Moreover, there is the often also the fore-grounded image-construction contributed by Wajda himself. Following the aforementioned introduction to Agnieszka, she leaves the building and, in an almost self-consciously heroic low-angle shot, flicks a visual sign of antagonism to the powers that be within. One could argue here for an almost proto-typically Godardian presentation of the signs, symbols and images that govern culture, but transposed from the capitalism of, say, Two or Three Things I Know About Her (1967) or Weekend (1967), to a paradigm of Eastern Bloc communism. Wajda makes image construction central precisely to induce active and participatory spectatorship in the viewer. But there is no “Rosebud”. Like Agnieszka, we must play detective and reach our own conclusions.

It must be added, finally, that Wajda followed up Man of Marble five years later with Man of Iron (1981), a sequel in which a new investigation focuses on Birkut’s son (played by the same actor, Jerzy Radziwilowicz, and seen in the closing scenes of Man of Marble). Actual footage of the historic Gdansk shipyard strikes underpins the narrative of this later film, which also explores the student unrest of 1968 and the struggles of 1970. Man of Iron won the Palme d’Or at Cannes, and it became a fitting end to this phase of Wajda’s career, as he next moved to France for the historical drama Danton (1982).