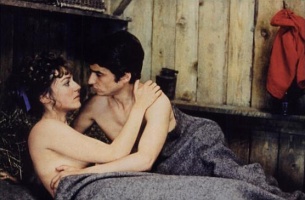 The body’s cries of love are no concern of the soul.

“I wanted to squeeze love like a lemon”, (2) François Truffaut told the press after making this film. Even today, Les Deux Anglaises et le Continent is a love story that leaves a sour taste. Its so-called hero, Claude Roc (Jean-Pierre Léaud) – a budding writer in turn-of-the-century Paris – falls in love, turn by turn, with two English sisters: the intellectual and highly-strung Muriel (Stacey Tendeter), a school-teacher; the shy but sensual Anne (Kika Markham), a sculptor. The sisters christen him “le Continent” as he embodies the libertine European culture that nice English girls are brought up to shun. Their love triangle spans a decade, during which he deflowers both girls. However, both liaisons fail in the long term, and Claude winds up alone. A bachelor on the verge of middle age, he contemplates his fading youth in a mirror. “My God!” he says, “You’re starting to look old.”

Given the fact that Claude is played by Jean-Pierre Léaud (star of Truffaut’s autobiographical Antoine Doinel films, from Les Quatre Cent Coups in 1959 to L’Amour en fuite two decades later) an audience might be forgiven for seeing this Belle Époque story as one more episode in its director’s own life. In fact, Truffaut made Les Deux Anglaises immediately after undergoing treatment for clinical depression – the result of an emotionally devastating break-up with the actress Catherine Deneuve. Over the past few years, he had loved not only Deneuve but also her sister, Françoise Dorléac, who died in a car accident in 1967. In his film of Henri Pierre Roché’s novel, he would alter the story to have Anne, the warmer and more spontaneous of the sisters, die tragically and unexpectedly of tuberculosis. The ice princess Muriel abandons Claude to have a daughter by another man (as Deneuve would soon do by her Italian co-star, Marcello Mastroianni).

It comes as no surprise that Les Deux Anglaises is a film of intense personal agony. Its hero is no less pitiable for being insufferably conceited, pompous and self-absorbed. (In another departure from Roché’s source, Truffaut has Claude’s mother die, as his own had done in 1968.) For all three of its protagonists, love is expressed through extremes of physical suffering. Claude cripples himself falling off a trapeze; Anne expires from TB; Muriel is prey to compulsive masturbation and hysterical blindness. “Truffaut spares his audience nothing”, writes Arnaud Guigue. “He shows us sweat and tears, vomiting and blood, the secretions of a body in the grip of passion” (3). At the film’s “climax” – when Muriel finally loses her virginity to Claude – a close-up of a sheet stained with blood engulfs the screen. “I tried to make not a film about physical love”, said Truffaut, “but a physical film about love” (4).

Bent on exploring both emotional and physical pain, Truffaut and his cameraman Nestor Almendros were determined to avoid the “picturesque” quality of so many Technicolor costume epics. “Both men distrusted the ‘postcard’ effect that ordinary colour brings to films.” (5) Designed almost entirely in muted shades of brown, ochre and mauve, Les Deux Anglaises has the texture of bruised flesh. Worried that the linens and the lingerie might photograph too brightly, Almendros had costume designer Gitt Magrini soak all the white cloth in a bath of tea. Despite moments of heart-rending beauty and lyricism, Les Deux Anglaises is never pretty in the conventional period style of Franco Zeffirelli or Merchant-Ivory. Its look is a tribute to its creators’ longing “to make black-and-white films in colour” (6).

None of this did Truffaut any favours at the Parisian box-office. While his 1961 adaptation of a Roché novel, Jules et Jim, had been a sensation worldwide, Les Deux Anglaises proved a critical and commercial fiasco. Still in a fragile emotional state, Truffaut himself withdrew the film from distribution – cutting it from two hours and 12 minutes to just over an hour-and-a-half. The full-length version would not be seen again until 1984, just a few months before its director’s death. “It is almost impossible to imagine”, writes Jean-Michel Frodon, “what it must have meant to an artist… to repeatedly mutilate one of his ‘children’ to try and make it acceptable to others” (7).

Not that any of his efforts paid off. Les Deux Anglaises remains a prime target for sceptics, such as Peter Matthews in Sight and Sound, who dismissed Truffaut as “a failed iconoclast… who excoriated the proficient, bloodless cinéma de papa in his youth only to become a paid-up member of it in middle age” (8). If only this film had been a traditional French costume romance, in the manner of Christian-Jaque’s La Chartreuse de Parme (1947) or Claude Autant-Lara’s Le Rouge et le Noir (1954) – both of which deal with tragic love triangles, albeit in a more decorative and genteel way – it might well have been a roaring success. A failure in the genre to which it technically belongs, Les Deux Anglaises is a film that nobody (least of all its creator) has ever been quite sure what to do with.

It was a film fatally out of step with its time. In the years before and after the student riots of May 1968 (in which Truffaut had played a crucial if low-key role, rallying to the defence of Henri Langlois at the Cinémathèque Française and helping to close down the 1968 Cannes Film Festival) the vogue was for films that glorified young love above all else. Bo Widerberg’s Elvira Madigan (1967), Franco Zeffirelli’s Romeo and Juliet (1968), and even Arthur Hiller’s Love Story (1970) exalted their youthful protagonists, inviting audiences to weep at their destruction by a soulless middle-aged society. Not one of these films comes close to suggesting that young lovers, left to their own devices, are wholly capable of destroying themselves. Yet that is precisely what the trio of lovers do in Les Deux Anglaises. Not just once but over and over – in graphic, at times gynaecological detail.

With its mood of romantic despair, Les Deux Anglaises may or may not be “the most vibrant and feverish film” (9) that Truffaut ever made. Yet it sets the tone for much of the “post-1968” cinema of the 70s and beyond. As a study of youthful idealism gone sour, it is as wrenchingly painful as La Maman et la putain/The Mother and the Whore (Jean Eustache, 1973) and Shampoo (Hal Ashby, 1975). As Claude gazes into the mirror at the end, it is not simply his character that is “starting to look old”. It is also Jean-Pierre Léaud, iconic star of the May ’68 generation, as well as his director and off-screen alter ego, François Truffaut. It is also – above all and crucially – we ourselves.

Les Deux Anglaises warns us that everybody, sooner or later, has to grow up. That is scarcely a popular notion. Least of all in the cinema, an art form dedicated to prolonging adolescent fantasies as long as possible. It is unlikely that Truffaut – who believed in the myth of cinema with a fervour that few have ever equalled – could have survived Les Deux Anglaises with any of his ideals intact. For a small number the summit of his career, it was also the beginning of the end.

All translations from French are by the author.